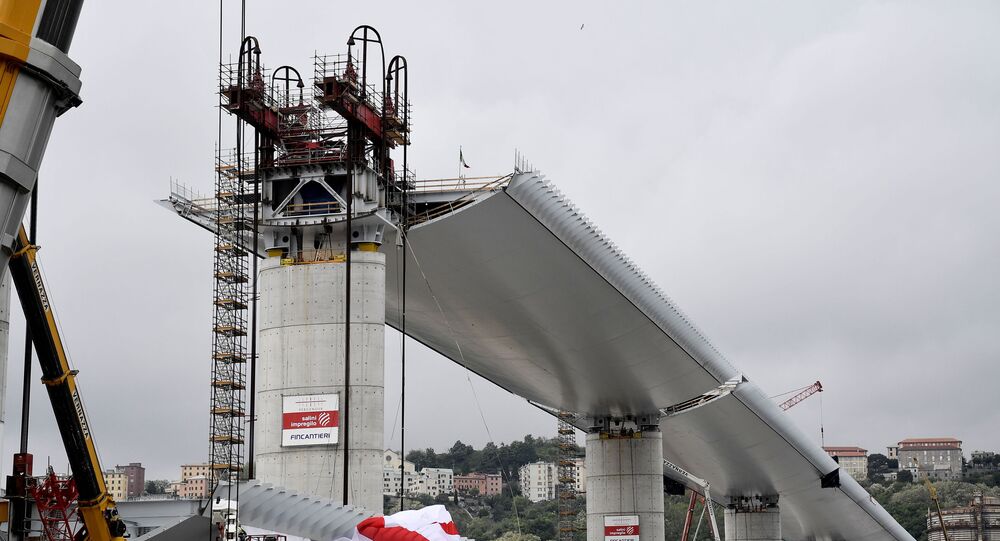 Pronto! Italy Celebrates as New Bridge in Genoa Opens Only Two Years After Disaster Which Killed 43

On a rainy day in August 2018 a huge section of the Morandi Bridge, which was built in 1967, collapsed killing 43 people. The design of the bridge, by architect Riccardo Morandi, and the way it was maintained over the years has been heavily criticised.

Italy’s President Sergio Mattarella will be the first person to officially cross a new £200 million bridge in Genoa designed by the architect Renzo Piano to replace a structure which collapsed two years ago.

Relatives of many of the 43 people who died have said they will not attend Monday’s event because they are concerned the ceremony is being used to brush over the mistakes which led to the 2018 Morandi Bridge disaster.

2 years ago Morandini bridge in Genoa crumbled. Taking 43 precious lives with it. This new bridge, ready today, will hopefully bring healing and joy to the many thousand who will soon cross it to rejoin the delights of the Italian meditaranean. Benedizioni da Ginevra, Italia💖 🌉 pic.twitter.com/e40ZE3i1CY

​Egle Possetti, whose sister died along with her husband and two children when their car fell from the collapsing bridge, said: "We won't be at the inauguration, we don't want the tragedy to be transformed into a carnival. You can have this sort of big party if you knock down the bridge because it's old, you build a new one, and no one's died."

Jets will fly overhead, streaming the colours of the Italian flag, as the national anthem plays and President Mattarella will travel across the new San Giorgio (St George) Bridge, which will be opened to traffic on Tuesday, 4 August.

St George is the patron saint of Genoa, a port city in the Italian province of Liguria.

The Italian architect Renzo Piano - who designed the Pompidou Centre in Paris and The Shard in London - said the new bridge had been designed to echo Genoa’s maritime history and he said he hoped locals would nickname it La Nave (The Ship).

Asked by a BBC reporter how the bridge was completed in so short a period of time, Mr Piano said: "I have no answer...I'm Italian and I love this country. It's fantastic. This is a country that is able to do things like that. It's not a miracle. You can do those things."

The names of the victims will be read out before the new bridge is officially opened.

The Morandi bridge collapsed because of problems in maintaining the metal cables which kept it up. They were hidden within concrete pillars and eroded in secret.

#Italy | A new bridge is set to open in #Genoa on Monday, two years after a viaduct collapsed killing 43 people. ➡️ https://t.co/Krnmdsmpfz pic.twitter.com/gpUTbQplNL

​Mr Piano said the new structure - which he described as a "child born of tragedy" - had a special dehumidification system to limit corrosion and four state-of-the-art robots which will carry out maintenance.

Autostrade’s parent company, Atlantia, is controlled by the wealthy Benetton family. Last month it finally bowed to public pressure and accepted the nationalisation of Autostrade, which also runs toll roads throughout Italy.