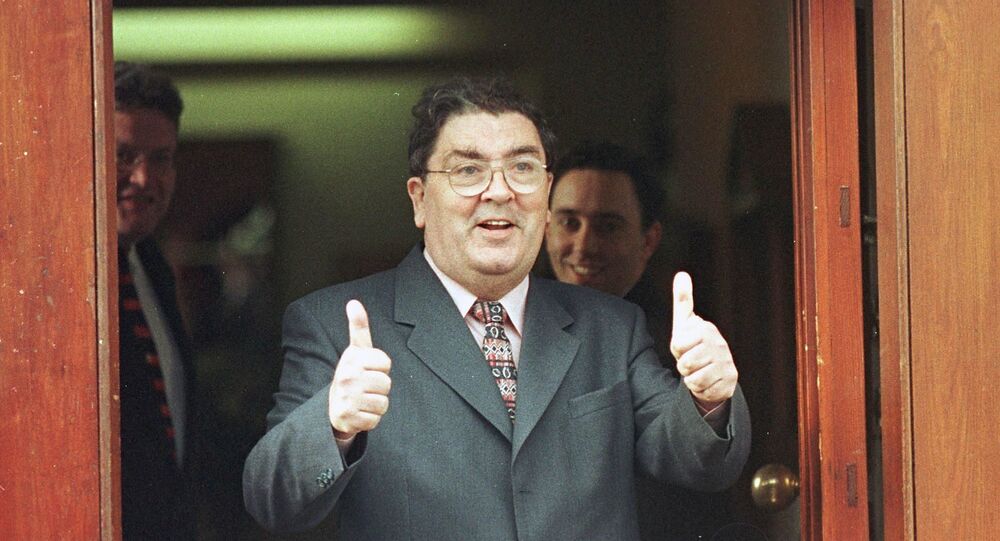 The Northern Irish politician and a founding member of the Social Democratic and Labour Party won the Nobel Peace Prize in 1998 for his contribution to the agreements between London and Dublin that ended decades of violent conflict in Northern Ireland.

John Hume - who was one of the key architects of the Good Friday Agreement, which ended The Troubles in Northern Ireland - has died.

SDLP leader Colum Eastwood said: "The death of John Hume represents the loss of 20th century Ireland's most significant and consequential political figure. This is a historic moment on this island but most of all it is a moment of deep, deep sadness".

‘I never thought in terms of being a leader. I thought very simply in terms of helping people’.

Nobel Laureate and former SDLP Leader John Hume passed away last night. We all live in the Ireland he imagined - at peace and free to decide our own destiny.

​Hume - who suffered from dementia in the last years of his life - worked closely with David Trimble, the then leader of the Ulster Unionist Party, to settle a violent conflict in Northern Ireland between the Protestant majority and the Catholic minority, which claimed over 3,500 lives between 1969 and 1994.

Hume and Trimble were subsequently awarded the Nobel Peace Prize for ending the conflict between the Irish Republican Army and the British government, who were unofficially supported by loyalist paramilitary groups like the Ulster Volunteer Force (UVF).

Leading the tributes to him, former Prime Minister Tony Blair said: "John Hume was a political titan, a visionary who refused to believe the future had to be the same as the past. His contribution to peace in Northern Ireland was epic and he will rightly be remembered for it. He was insistent it was possible, tireless in pursuit of it and endlessly creative in seeking ways of making it happen."

One of many great John Hume quotes:

“Ireland is not a romantic dream; it is not a flag; it is 4.5 million people divided into two powerful traditions. The solution will be found not on the basis of victory for either, but on the basis of agreement and a partnership”

Hume was the first politician to sit down for talks with Gerry Adams, the leader of Sinn Fein - the political wing of the Provisional IRA.

Those talks led to secret negotiations with the British and Irish governments which led to the IRA's first ceasefire in 1994. That broke down and there were more killings but when the Labour Party won a landslide election victory in 1997 Tony Blair's new government made peace in Northern Ireland its top priority.

John Hume is dead, just 6 months after the death of that other SDLP giant, Seamus Mallon. When others turned to the IRA & violence, Hume turned to politics & throughout the Troubles espoused non-violent nationalism. Ultimately, the Good Friday Agreement was saturated in his ideas pic.twitter.com/EslveB5hYH

Hume was key to the eventual Good Friday Agreement, which led to power-sharing between the Protestant and Catholic communities.​

Irish Prime Minister Micheál Martin said Hume was a "great hero and a true peacemaker", adding: "During the darkest days of paramilitary terrorism and sectarian strife, he kept hope alive. And with patience, resilience and unswerving commitment, he triumphed and delivered a victory for peace."

Hume resigned from the SDLP in 2001 and served as a Member of the European Parliament until his retirement in 2004.

Hume was named "Ireland's Greatest" in a public poll in the Republic of Ireland in 2010.

John Hume (L) as a young civil rights leader in Derry in 1969, asking riot police not to use violence on protesters.
On right, with his fellow Nobel Peace Laureate unionist David Trimble & Bono, the week the Good Friday Agreement was approved in a referendum in 1998. pic.twitter.com/ARqao1pEKH

​Northern Ireland's First Minister Arlene Foster described Hume as a "giant in Irish nationalism" and sent her condolences to his widow, Pat.

His fellow Nobel Peace Prize winner, Lord Trimble, said: "Right from the outset of the Troubles, John was urging people to stick to their objective peacefully and was constantly critical of those who did not realise the importance of peace."