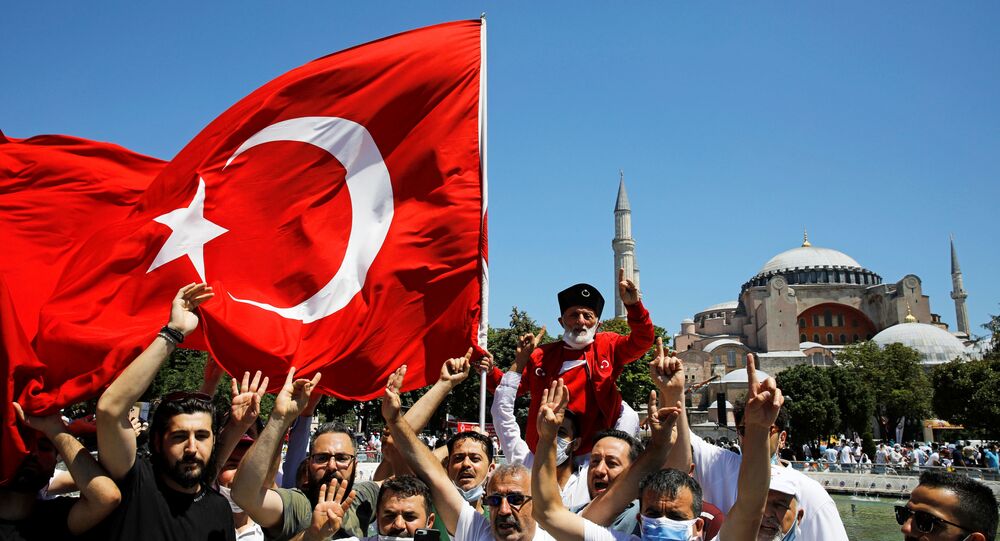 ATHENS (Sputnik) - Greece's Foreign Ministry said Saturday it disapproved of desecration of national symbols after Turkey accused it of encouraging the burning of its flag at a rally against the conversion of Istanbul's ancient Orthodox Christian temple into a mosque.

"We categorically condemn any action that desecrates a national symbol of any country, in this case of Turkey," the ministry said in a tweet.

Angry Greek protesters set a Turkish flag on fire in the Aegean Sea port of Thessaloniki on Friday in response to the first Muslim prayer held in the landmark Hagia Sophia in nine decades.

© REUTERS / UMIT BEKTAS
Hagia Sophia and Its Turbulent History of Conversions
Hagia Sophia was built as an Orthodox Christian cathedral by Byzantine emperor Justinian and opened its doors to believers in 537, remaining the world's largest Christian temple for about a thousand years.

It was converted into a mosque after the Ottoman conquest in 1453 and became a museum under Turkey's secular leader Mustafa Kemal Ataturk in 1934. That status was revoked by a Turkish court in July this year, with President Recep Tayyip Erdogan decreeing that Hagia Sophia would become a mosque once again.