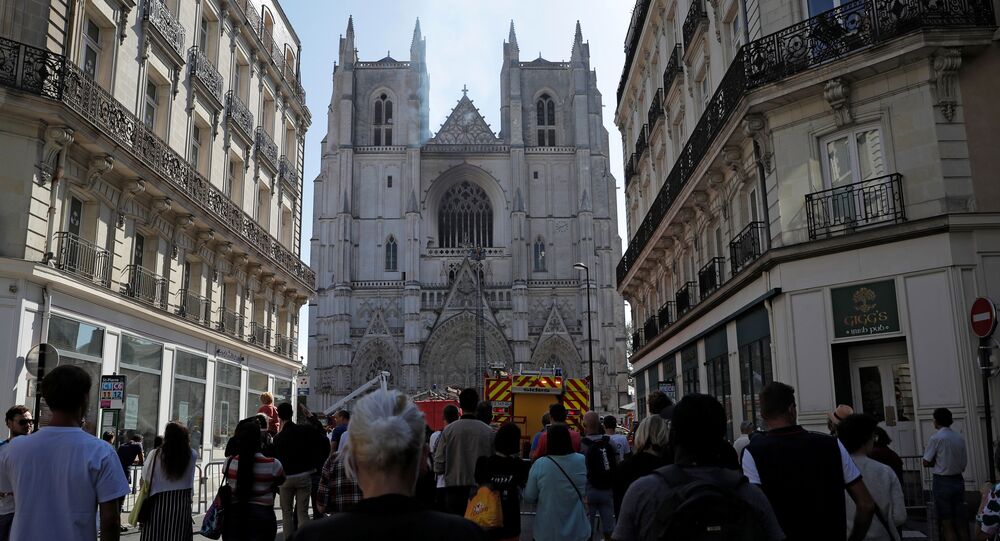 MOSCOW (Sputnik) - The Heritage Foundation is now collecting donations for the reconstruction of the 400-year-old organ in the Cathedral of St. Peter and St. Paul in Nantes that was damaged by a violent blaze on Saturday.

"The gothic Cathedral of St. Peter and St. Paul of Nantes suffered a serious fire in the morning of Saturday, July 18, 2020. So that the great organs of Nantes cathedral are rebuilt and resonate again, the Heritage Foundation, in coordination with the Ministry of Culture, is appealing for generosity," the foundation said in a statement.

According to the release, the great organ of the cathedral, erected in the 17th century, has undergone several restoration operations and survived the French Revolution, the bombings of World War II and the fire of 28 January 1972.

"The Heritage Foundation therefore invites all those who wish to make a donation in favor of the reconstruction of the great organ of the Cathedral of St. Peter and St. Paul of Nantes," the foundation said.

Over 100 firefighters were deployed at the cathedral on Saturday morning. Jerome Langlois, a spokesman for the Loire-Atlantique department's fire brigade, said late on Saturday that the fire had been extinguished and there was no risk of a collapse, but that firefighters were going to continue their work at night.

According to Nantes Prosecutor Pierre Sennes, three sources of the fire have been identified, one of them at the level of the great organ. According to French media reports, the Saturday fire at the Cathedral of St. Peter and St. Paul completely destroyed the organ. Sennes said that an arson inquiry had been launched.

Notre Dame Cathedral One Year On After Devastating Fire