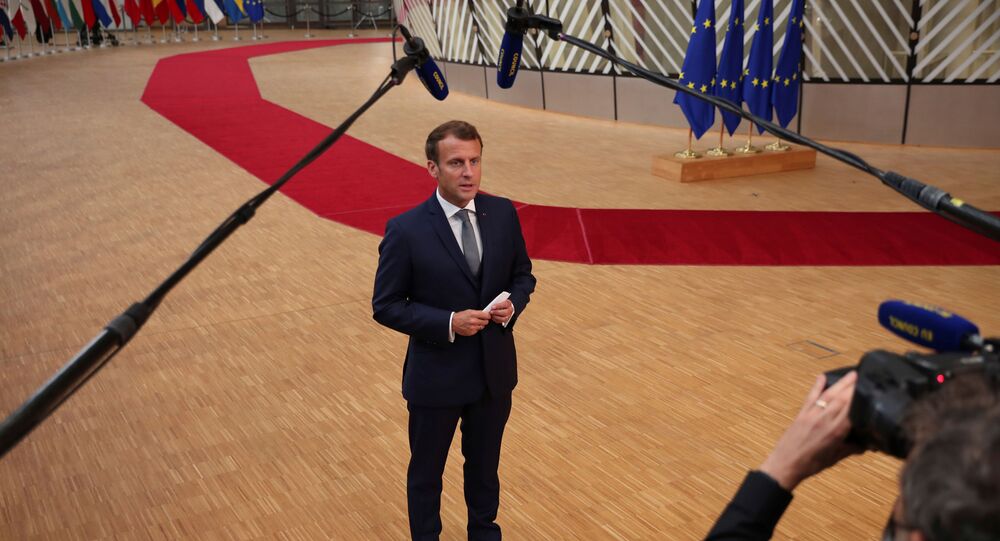 MOSCOW (Sputnik) - French President Emmanuel Macron stated on Friday that the first physical summit of the European Union leaders since the beginning of the coronavirus pandemic would be decisive for securing agreements for the sake of EU economical and social recovery.

"France and Germany have reached an accord ... that has served as the basis for the European Commission's proposal on the recovery plan. The coming hours will be decisive for achieving compromise so that the recovery plan and the European budget for the next years promotes economical, social and environmental recovery, for securing new sovereignty in the spheres of technology, industry and ecology, and reaching consensus regarding the worst-affected regions and the most fragile groups of the population. This is related to our European project. I am confident, yet cautious, and I will do my best. Together with [German] Chancellor Angela Merkel and [European Council] President [Charles], Michel, we will do everything to achieve this goal," Macron said upon arriving at the summit.

Meanwhile, European Council President Charles Michel expressed confidence on Friday that an agreement on the European Union's long-term budget and COVID-19 recovery plan would be reached at the first physical summit of the EU leaders since the beginning of the pandemic, also noting that the event is "about people."

"We worked very hard in order to prepare this summit, I know that it would be very difficult because it is not only about money, it is about people, about the European future, about our unity, and even if it is difficult, I am convinced that with political courage it is possible to reach an agreement," Michel said in his doorstep statement ahead of the two-day summit, currently kicking-off in Brussels.

© REUTERS / FABRIZIO BENSCH
Day One of Extraordinary In-Person EU Summit Over COVID-19 Issue and Bloc's Budget - Video
Earlier, German's Chancellor Merkel urged all EU member states to support the German-French initiative to create a recovery fund of at least $565 billion to help the countries that have been the worst hit by the coronavirus pandemic.

However, the proposal has divided the bloc. The southern states, like Italy and Spain, believe that the aid should be given as grants, while Austria, Denmark, Sweden, and the Netherlands contend that it should be provided as loans.