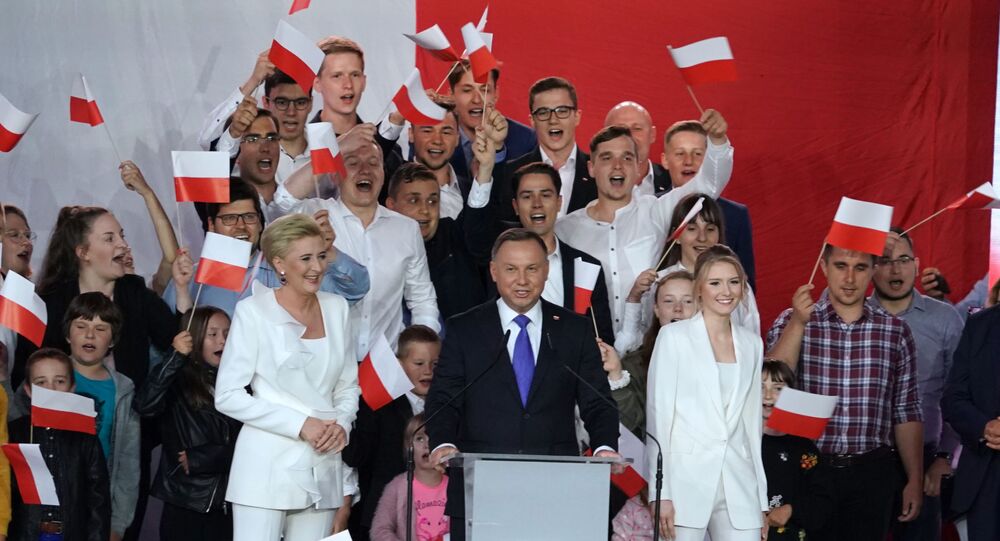 WARSAW (Sputnik) - Incumbent Polish President Andrzej Duda has been reelected to sit another five-year presidential term after winning the presidential election with a narrow lead over key rival Rafal Trzaskowski, the candidate of the opposition Civic Platform party.

Duda's victory in the two-round presidential election will see that the ruling Law and Justice party (PiS), which nominated him as a candidate, upholds absolute power for at least the next three years.

The first round of the election in late June had Duda win 43.5 percent of the vote, compared to Trzaskowski with 30.5 percent. The runoff was held this past Sunday.

At this point, the Polish National Electoral Commission has yet to process ballots from the remaining nine local electoral commissions before it can announce the election's final results.

Nevertheless, with 99.97 percent of protocols processed, it is safe to say that Duda has effectively won the election. Ballots from 27,222 electoral districts have shown Duda win 51.21 percent of the vote as opposed to Trzaskowski with 48.79 percent.

In absolute figures, Duda's lead translates into roughly 500,000 votes, and the number of voters in the remaining electoral districts does not exceed 200,000.

Duda's victory means that Poland's ruling PiS party can continue to unilaterally rule the country for at least three years until the next scheduled parliamentary elections.

PiS holds the majority in the Polish parliament's lower house, the Sejm, enough to form a government. The seat majority also means that the party has the power to pass any laws unimpeded.

While the upper house has an opposition majority, it is of a little obstacle to the ruling party and the best it can do is slow down the legislative process. In Poland, when the senate vetoes a bill by the Sejm, the bill returns to the lower house, where lawmakers have the power to invalidate the upper house's veto by a simple majority vote.

After parliament, bills go to the president, who can either sign them into laws or veto them. To invalidate the president's veto, the lower house needs a two-thirds vote, which the current ruling party lacks. This means that what PiS needed to secure unimpeded legislative power was a loyal president in power.

The presidential vote has shown that the variance of political preferences in Poland was linked to locality and age. Duda appeared to have won the majority in rural areas, while Trzaskowski's support was higher in cities.

When the Polish people's divide became apparent, Duda rushed to announce that the country needed a ruling coalition. Directly after the end of the vote, the president invited all political parties to join in, specifying that the coalition was open to all political forces that value "our family, our history, our Polish interests, our heroism and pride."

Duda also congratulated his rival on achieving good results and invited him to the presidential palace in Warsaw after the election. Trzaskowski rejected the invitation, saying that the right time for such a meeting would be after the final results are announced. The opposition candidate vowed, however, to "always give a hand to those thinking differently."