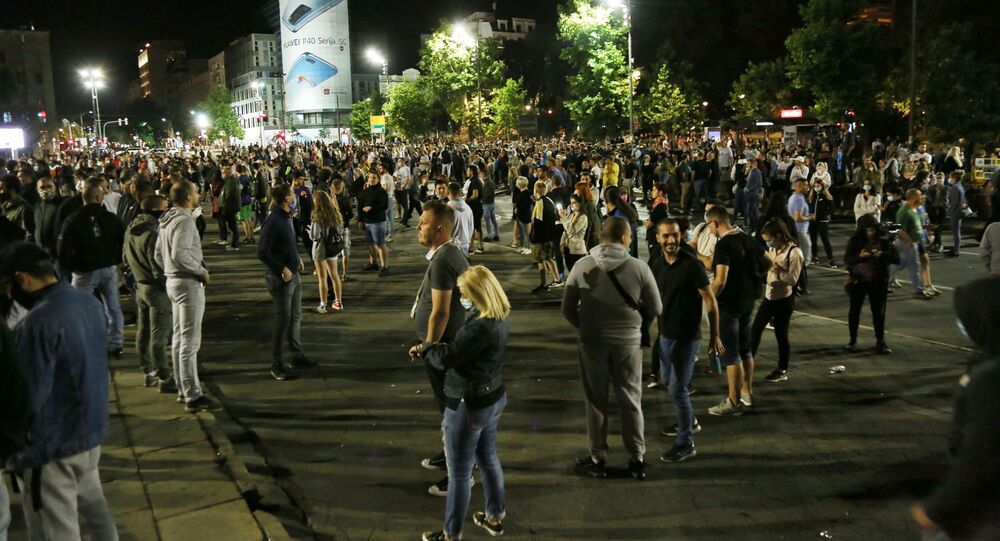 "We don’t need pointless gatherings, tonight there aren’t even 500 people, which means that there will be less infection, last night there were about 1,000 of them [protesters]", Vucic said on RTV Pink on Sunday night.

The president stressed that if the Serbian people behaved in a disciplined way they would be able to defeat the coronavirus.

Asked about the possibility of Russia’s involvement in the demonstrations, Vucic said that he did not have any proof of that. On Thursday, the Russian Foreign Ministry said that media reports about an alleged Russian trace in the protests against planned coronavirus restrictions in the Serbian capital were a hoax aimed at affecting the Russian-Serbian partnership.

Belgrade’s Deputy Mayor Goran Vesic said on Sunday that police had discovered supplies of Molotov cocktails and gas masks during searches of buildings linked to protesters. Containers filled with stone blocks that protesters planned to use to attack the police were also found by Belgrade city employees and law enforcement officers.

On Saturday, Serbian police director Vladimir Rebic said that 71 people were detained during protests held the day before, and 130 police officers had suffered injuries since the demonstrations broke out.

The damage from the first two nights of unrest in the Serbian capital over Vucic’s decision to reimpose lockdown measures is estimated at $1.1 million (one million euros), according to Belgrade’s deputy mayor Vesic.

In the late hours of Friday, protesters dismantled the fence near the parliament building in Belgrade and threw rocks and paving slabs at law enforcement officers. Police responded with tear gas and stun grenades. At least 20 people were injured.

A wave of protests started in Belgrade and other cities in Serbia earlier this week after the government once again imposed a lockdown amid an increase in COVID-19 cases.

Serbia has 18,360 confirmed coronavirus cases and the country’s COVID-19 death toll is approaching 400, according to the latest data from the National Health Ministry.