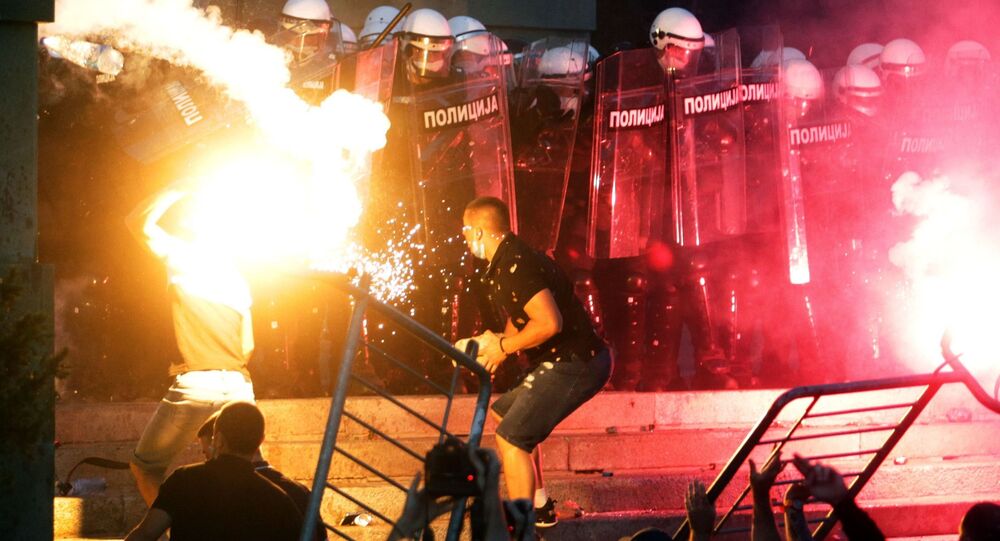 BELGRADE (Sputnik) - The damage only from the first two nights of unrest in the Serbian capital over coronavirus restrictions is estimated at about 1 million euros ($1.1 million), Deputy Mayor Goran Vesic said on Saturday.

Following the fourth night of protests in the city, the deputy mayor took to Facebook to share photos of smashed windows, damaged pavement and streets awash with chunks of stones and bottles. Posting a picture of a 1939 defaced sculpture of horses in front of the parliament’s building, the official called the vandals "monsters".

"In the morning, Belgrade began assessing the damage. As soon as the assessment is completed, we will publish it, submit a criminal complaint and a claim for damages to the prosecutor's office. Each of these monsters who will be detained and whose participation in the violent gathering will be proved will pay damages", Vesic stated.

​According to the deputy mayor, the damage dealt to the city property as of 9 July evening amounted to 30 million dinars ($288,000), excluding damaged private cars, cafes and restaurants, shop windows and other things.

"When one counts everything, one will get about 1 million euros only for the first two nights of vandal attacks", the official added.

The ongoing protests in Belgrade are marred by vandalism and clashes with police. In the late hours of Friday, protesters dismantled the fence near the national parliament and pelted law enforcement officers with rocks and paving slabs. Police responded with tear gas and stun grenades. According to the city ambulance, at least 20 people sustained injuries.