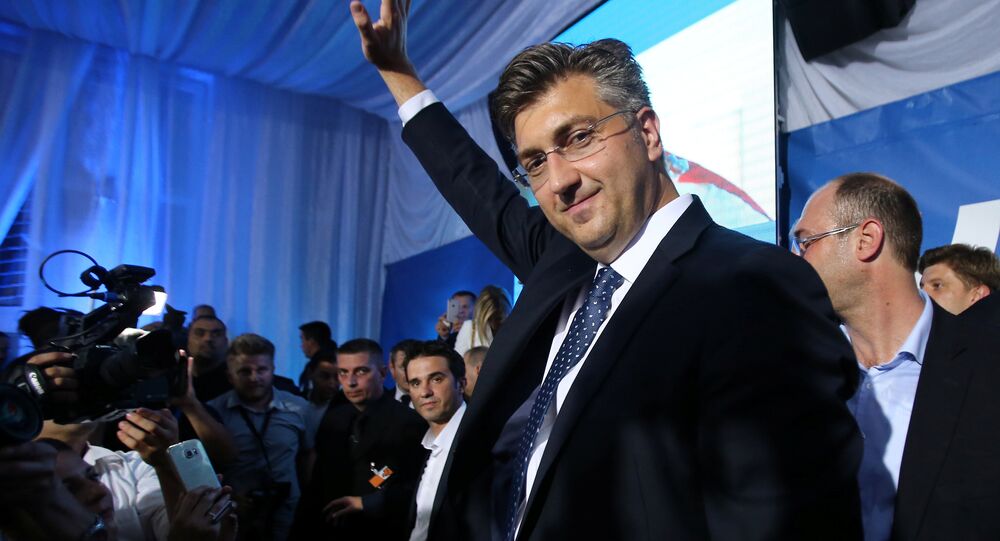 BELGRADE (Sputnik) - The ruling Croatian Democratic Union (HDZ) party of Prime Minister Andrej Plenkovic is leading the parliamentary elections with an outlook of securing 61 seats in the legislature, according to an exit poll by the Ipsos research lab.

The right-centrist HDZ is followed by the centre-left Restart coalition led by the Social-Democratic Party with projected 44 mandates and the rightist Homeland Movement of businessman Miroslav Skoro with 16 mandates.

The Constitutional Court of the Republic of Croatia ruled on Friday that all Croatians, including those sick with COVID-19, must be given an opportunity to vote. Voters have to wear face masks and gloves at polling stations and follow social distancing guidelines.

© REUTERS / LISI NIESNER
Austria, Croatia Confirm First Cases of Coronavirus
Voters are able to choose from among 192 lists of parties, coalitions and individual candidates for 12 constituencies. Eight seats in Hrvatski Sabor (parliament) are guaranteed to national minorities and three to the diaspora. There are a total of 151 seats.

According to the latest pre-election surveys, Croatia’s two main parties, the ruling conservative Croatian Democratic Union (HDZ) and the centre-left Social Democrats (SDP), will be the top two contenders for parliament seats. According to a Thursday RTL television survey, the SDP-led Restart coalition will win 56 seats in Hrvatski Sabor, while HDZ will get 55 seats.

Croatia has a total of over 3,000 confirmed coronavirus cases and the country’s COVID-19 death toll stands at over 100. More than 2,100 people have recovered from COVID-19 in Croatia.