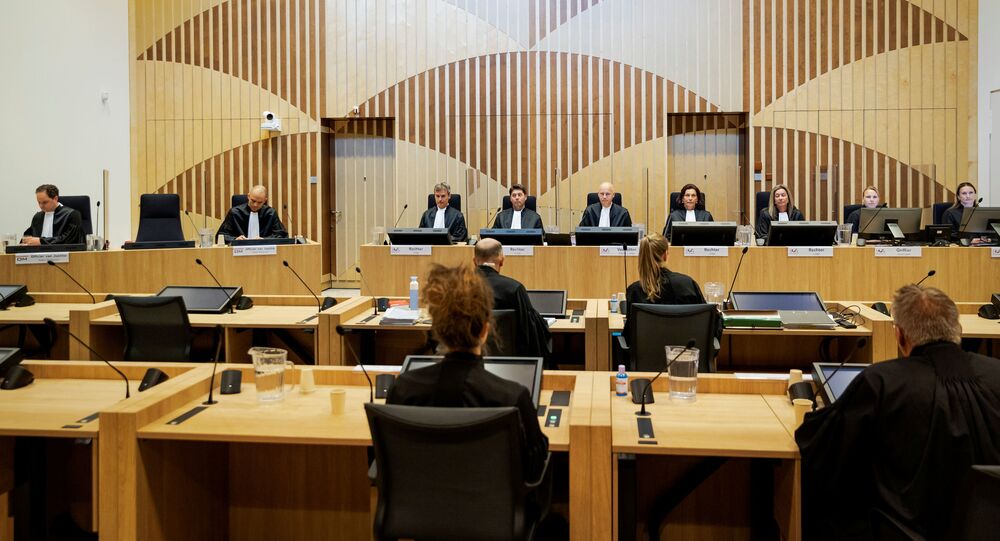 MOSCOW (Sputnik) - Hearings in the case of the 2014 downing of flight MH17 in Ukraine resumed in the Dutch Schiphol Judicial Complex on Monday.

The hearings into the MH17 crash were renewed on 8 June with Russian nationals Pulatov, Igor Girkin and Sergey Dubinsky, and Ukrainian national Leonid Kharchenko being defendants in the case. Dutch prosecutor Thijs Berger revealed new details of the forensic probe, including an analysis of the bodies and aircraft parts, as well as telecommunications research, including the interception of negotiations in eastern Ukraine at the time of the crash. In addition, the prosecution told the trial about various versions of what had happened, including the one of how the aircraft could have been shot down, and how the alleged involvement of four defendants in the plane crash was established.

As a result, Berger said that cases against three suspects in the investigation in the MH17 aircraft crash were ready for the main trial, which could begin in the fall. The three cases in question are those of Girkin, Dubinsky, and Kharchenko. As for Pulatov, it is too early to say when the main trial could begin, the prosecutor said.

At the current hearing, the defense is expected to present its position on issues that were previously raised by the prosecution, as well as voice its requests. The prosecution, among other things, will have to explain why it requested more time to investigate the case against Pulatov before proceeding to consider his case on the merits.

Malaysia Airlines Flight MH17 crashed on 17 July 2014, in eastern Ukraine while en route from Amsterdam to Kuala Lumpur, killing all 298 people aboard. The accident is being investigated by Dutch prosecutors and the Dutch-led Joint Investigation Team, which claim that the plane was hit by Russia's Buk missile. Moscow has repeatedly denied involvement in the incident.