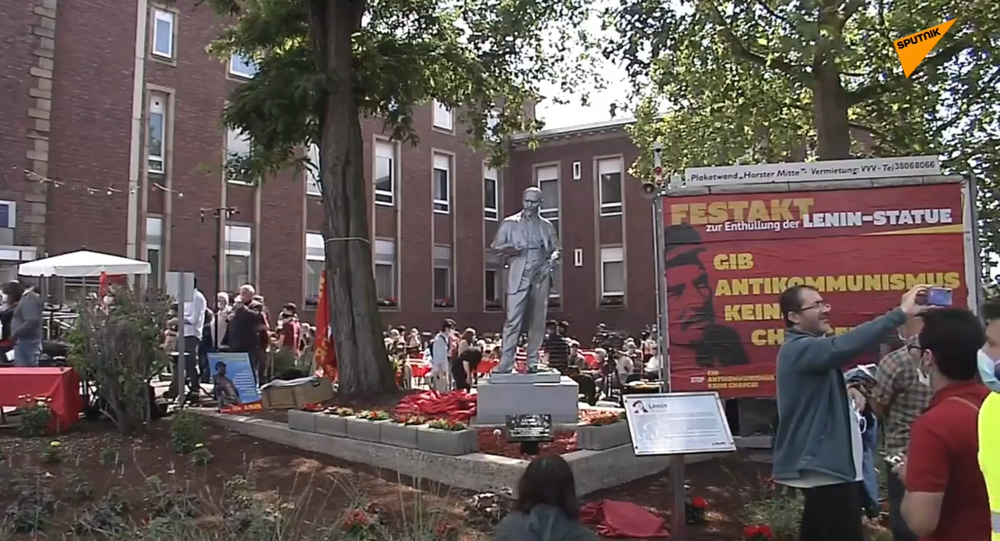 After a long battle between the Marxist party and city authorities, Gelsenkirchen, a town in the area of Ruhr, will become the first city in the western area of Germany to boast a statue of Vladimir Lenin - the founder of Russia's Communist party.

Around 800 people gathered at the inauguration of the 2.15 metre Lenin statue in Germany's Gelsenkirchen, in the Ruhr Valley. Despite initial controversy over the statue, the city court gave the local Marxist-Leninist party permission to put the metal memorial near its headquarters.

City authorities had originally opposed the statue, claiming that it would “disturb the view” of a neighbouring building, while a local council for the district of West Gelsenkirchen argued that it was inappropriate to put up a statue of Lenin because, in his opinion, the cultural icon is "representative of violence, suppression, terror and immense human suffering".

People seemed to see the historical figure differently, with some social media users celebrating the statue's inauguration, and taking note that, to the contrary of statue demolition in the United States, "Gelsenkirchen takes a different approach and honors a Russian revolutionary".

While historical statues are overthrown in the USA, Gelsenkirchen takes a different approach and honors a Russian revolutionary: However, the Lenin statue was only allowed to be erected there after a legal dispute. pic.twitter.com/W3xRrLZrkC

This is neo-Bolshevik revolution happening! While our Western heritage is being destroyed, a monument for the mass murderer Lenin was unveiled moments ago in Gelsenkirchen, Germany. (Photo: Amos Chapple) pic.twitter.com/eWfwOA0jtL

​The video from the inauguration, showing a musical performance, was shared in social media.

Communism rising: A statue of Vladimir Lenin has been unveiled in the western German city of Gelsenkirchen pic.twitter.com/SUAQXcXZ5y

​Some protested over the statue, echoing a local council statements that Lenin was an inappropriate figure to honor, even attempting to compare him to Hitler.

A Lenin monument was unveiled today in Gelsenkirchen, Germany by the DE Marxist-Leninist Party.

I want to know why this was even allowed. DE has strict laws banning Nazi symbols. If they are allowing Lenin to go up, may as well allow Hitler, too.

At least there were protestors. pic.twitter.com/z3ZNX3ooTB