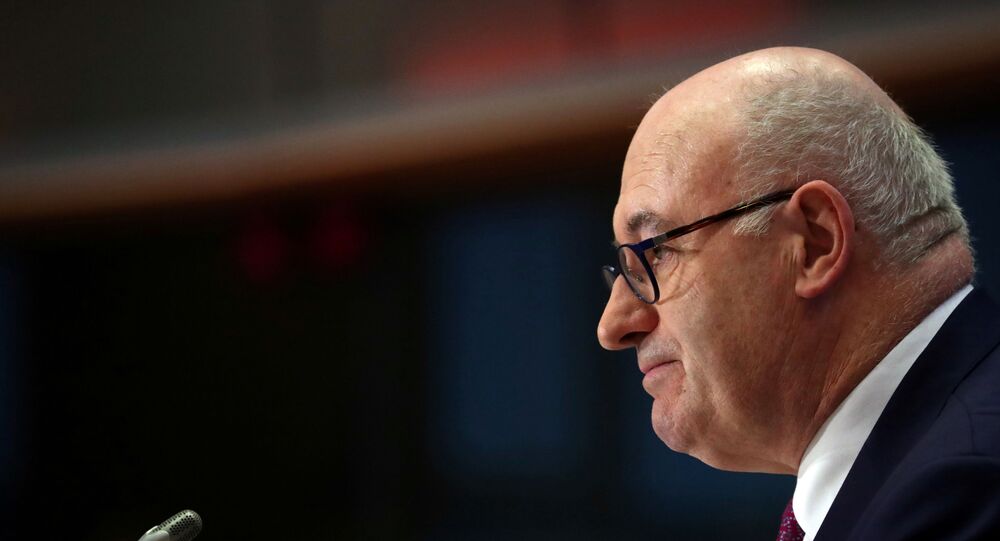 Hogan, the long-time Irish lawmaker and current European Commissioner for Trade, is the EU’s chief negotiator in its currently-stalled talks with the United States. He teased for a bid to lead the World Trade Organisation – a post approved by the US – at the time when the EU is nearing a trade war with the United States.

There are concerns in Brussels that European trade chief Phil Hogan’s pitch to become WTO director-general could be detrimental to the union’s standing in trade talks with the US.

Hogan, who was appointed European Commissioner for Trade in December 2019, confirmed last week that he is considering running for the top WTO job. This position is traditionally approved by the United States.

The previous director-general, Brazil’s Roberto Azevedo, is due to resign on 31 August a year early as Washington’s decision to block the appointment of judges effectively paralysed the WTO’s dispute-settling body.

In the meantime, the US risked triggering another trade war after it pulled out of global talks on taxation at the OECD. A number of European countries, including France and the UK, were hoping to impose taxes on tech companies which exceed a certain revenue threshold. That would affect mainly US corporations like Facebook and Google, given their size.

The Trump administration threatened to impose tariffs should European nations press ahead with their promised taxes. France, the UK and Brussels defied the threat and vowed to continue the negotiations without the United States.

Aside from that dispute, US trade talks with the UK and the EU stalled this week over suspicion of poor American food standards, something the US trade representative blamed in “thinly veiled protectionism” on the part of Europeans.

Why are some in the EU against Hogan’s bid?

“It’s an ill-conceived and ill-thought-through plan,” one unnamed EU diplomat was quoted as saying. “The EU needs a strong commissioner on trade and not one that has inflicted self-harm on himself and therefore our trade instruments.”

The diplomat questioned Hogan’s credibility as trade negotiator in case he fails to secure the WTO post: “How is he to discuss lobsters or cars with the very people that rejected him and know he’s not in it wholeheartedly?”

Some other speakers interviewed by POLITICO voiced concerns that if Hogan gets the job, his successor in the European Commission could steer the bloc’s trade agenda toward even more protectionism.

“His candidacy is leading to a lot of frustration with EU capitals precisely for this reason: It can harm EU trade policy in the future, just while we’re facing such big challenges,” one European lawmaker said.

The European Commission this week applied conflict-of-interest rules limiting Hogan’s public appearances while his boss, Commission Vice President Valdis Dombrovskis, will oversee any decisions on trade policy or trade negotiating positions for which Hogan is responsible. However, Hogan will continue to lead the EU’s trade talks with the Trump administration.

Despite these concerns, Brussels on Thursday said Hogan is still the EU's point man for trade talks with the Trump administration.

There is also an view in Brussels that Hogan is unlikely to have a conflict of interest before the November presidential election in the US.

“I don’t see at the moment any real conflicts of interest, because there is not much to negotiate before the elections,” Bernd Lange, a German MEP who chairs the European Parliament’s trade committee, told POLITICO.

Lange said he doubts that the US will introduce new tariffs in the coming months, meaning that Hogan’s muzzle might actually not be that harmful. “It is not really necessary — or even helpful — to do sabre rattling from our side as well,” he said.