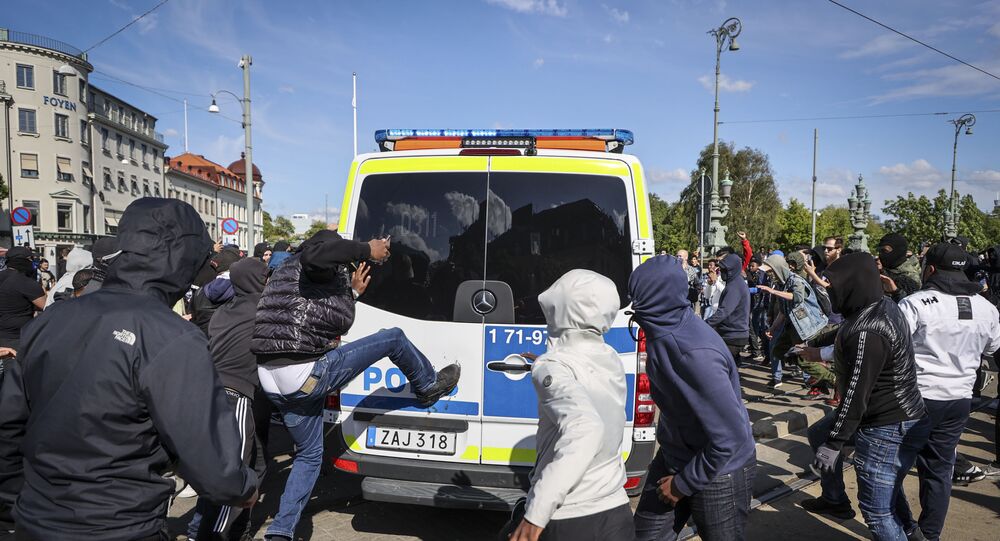 Swedish producer, writer and blogger Alexander Bard, a former star of the pop act Army of Lovers, lashed out against the Black Lives Matter movement, calling its members and supporters to stop “becoming self-appointed victims” and instead “get their s**t together”.

Swedish TV4 has decided to part ways with producer Alexander Bard as a member of the jury in the show “Sweden's Got Talent” following his criticism of the Black Lives Matter movement.

In a viral post this weekend, Bard urged the black community to stop living on welfare and playing the victim card.

“If black lives want to matter, then black lives get their f***ing s**t together, study hard, go to work, make their own money instead of depend on welfare, stop lying, get out of prison, and become heroes instead of self-appointed victims for the world to laugh at. That matters!”, Bard tweeted.

​Following this tweet that ruffled many feathers and left the public deeply divided, Bard was also relieved of his duties as jury member in TV4's “Sweden's Got Talent” show.

“TV4 has been in contact with Alexander Bard and has jointly concluded that it is not appropriate for him to continue as a juror on “Sweden's Got Talent”, executive producer Lotta Edvardsson explained in a comment to the newspaper Expressen.

According to the newspaper, celebrity influencer and fellow jury member Bianca Ingrosso demanded that Bard be fired, threatening to leave the jury herself otherwise.

Bard called TV4 “embarrassingly amateurish” and “passive aggressive” and accused it of “pandering to the lynch mob”.

You can't blame Sweden's #TV4 channel for being professional and factual in its reporting. This is so embarrassingly amateurish and passive aggressive. And of course merely mimicks whatever the current braindead lynch mob promotes. Nobody THINKS here. https://t.co/foI2tAkUJF

​Some lamented the firing of Bard as an attack on free speech.

​Tweet: “'TV4 kicks out Alexander Bard'. So freedom of opinion no longer prevails in Sweden”.

In a subsequent interview with the news outlet Nyheter Idag, Bard expanded his ideas and ventured that Martin Luther King would have hated Black Lives Matter.

“I believe victim cults are a sheer hell, and there will only be a lot of violence and misery. <...> [The US] tear down statues of heroes and build new statues of victims, and I think black people deserve better. Not least all the blacks who work hard, plug, take their kids to school, stick to their marriage – and it works”, Bard told Nyheter Idag.

For his tweet, Bard even received threats, not least from 46-year-old rapper Leopoldo Fernando Gonzalez Carmona, known under his moniker as “Chinaman” and currently serving a jail sentence. In a now-deleted Instagram live, Carmona called Bard “f***ing gay son of a bitch”. “You will hear more of me, you damn f*g”, he said, as quoted by the news outlet Samhällsnytt.

​Since his show business days, Bard has reinvented himself as a political activist. Describing himself as a Libertarian Marxist, Bard, a vocal opponent of laws against drug consumption and prostitution, has been an on-and-off member of the Liberals and the Citizens' Coalition Party. Following the BLM debacle, Bard left the Liberals for the second time.

The death of George Floyd, a 46-year-old African-American man, in police custody in the US state of Minnesota has sparked major protests across the US and beyond, with violent clashes and looting.