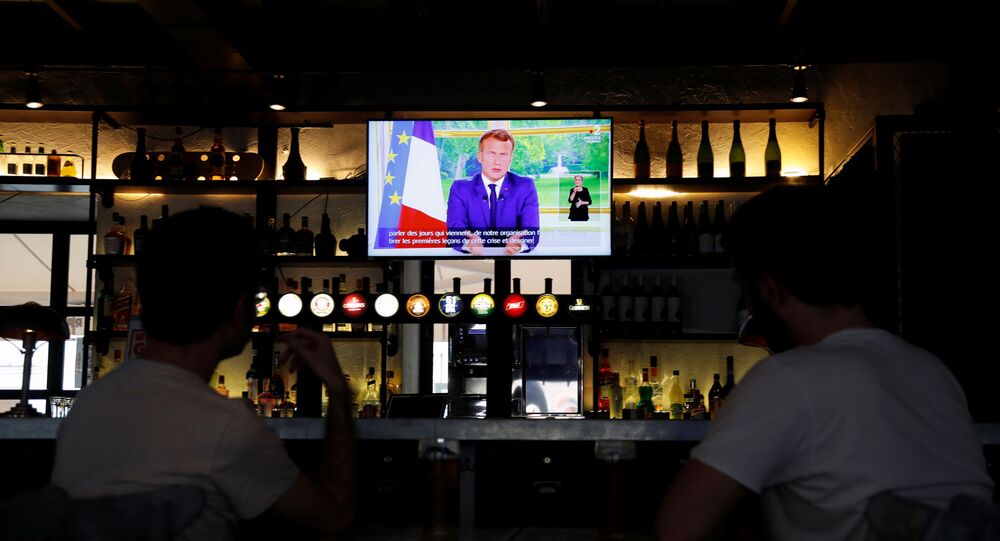 PARIS (Sputnik) - The French authorities have allocated about 500 billion euros ($562 billion) to support the country's economy amid the crisis triggered by the coronavirus pandemic, President Emmanuel Macron said on Sunday.

"We decided to introduce a massive plan for the most affected sectors - car manufacturing, aircraft, tourism, culture, restaurant, and hotel industry. And we will continue to implement it. In total, we mobilized almost 500 billion euros to support our economy for workers, for entrepreneurs, for the most needy", Macron said during his address to the nation, adding that these costs are justified in the current situation.

The president also said that these expenses would be added to the country's existing debt. At the same time, Macron noted that the authorities would not finance the costs by raising taxes, as France is already a country with a heavy tax burden.

"The only answer is to build a stronger, more sustainable economic model, work and produce more so as not to depend on others. And we must do this, even despite the fact that our country will face numerous bankruptcies due to the halt of the global economy", Macron added.

According to the leader, it is necessary to avoid layoffs and create new jobs, investing in France's "technological, digital, industrial and agricultural independence".

The President added that fight against the coronavirus in France is not over yet, but the country has already claimed the first victory. He referred to the fact that starting Monday, all the country but Mayotte and French Guiana is going into the so-called 'green zone', which will allow to renew a lot of economic activity.

Macron went on to say that restaurants and cafes would fully resume operations in the Ile-de-France region and that kindergartens and schools would be able to accept all students on a mandatory basis starting 22 June.

Macron also confirmed that the second round of French municipal elections, which was put on hold due to the coronavirus pandemic, would take place on 28 June.

France began lifting its lockdown measures on 11 May by reopening educational facilities, entertainment venues, public places, including cafes and restaurants, in the 'green' regions of the country, which are less affected by the virus. As of Sunday, France has confirmed over 152,000 COVID-19 cases and 29,335 fatalities related to the disease, the World Health Organization dashboard shows.