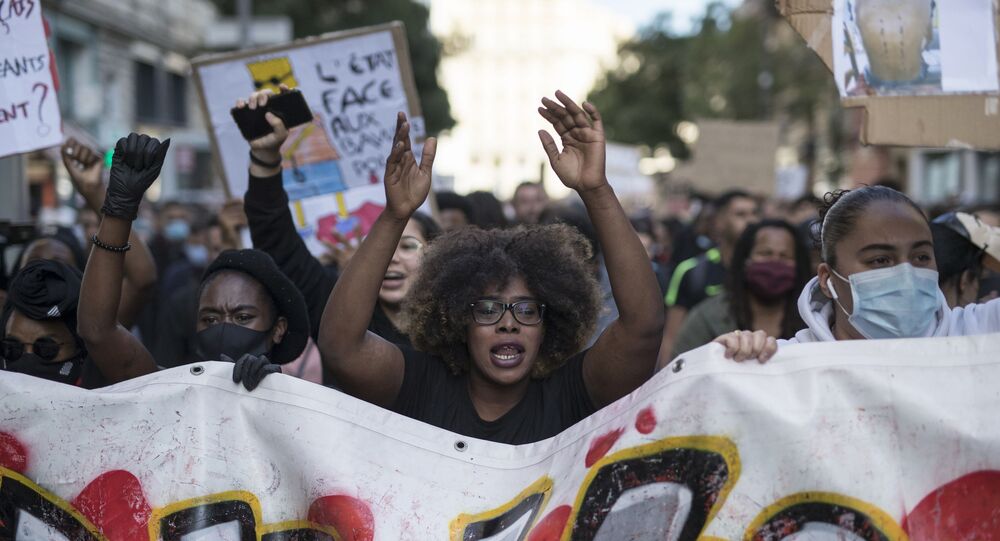 On Saturday, protesters gathered in the French capital for an unauthorized rally to show their solidarity with Black Lives Matter movement and protest the death of Adama Traore in police custody back in 2016. They soon verbally clashed with some counter demonstrators.

Anti-racism protesters were filmed shouting anti-Semitic slogans during a rally in Paris on Saturday, Valeurs actuelles reported, providing a video of the incident where “sales Juifs” (dirty Jews) chants can be heard multiple times.

The protesters gathered in Paris’s Place de la République on 13 June. Black Lives Matter demonstrations have swept the world following the death of George Floyd in police custody on 25 May. According to Valeurs, demonstrators were set to protest police brutality and the death of Malian French man Adama Traore in police custody in 2016. However, at around 2:30 pm they reportedly clashed with a counter-protest group “Génération Identitaire” that unrolled a banner denouncing “anti-white racism”. The first group of demonstrators then started shouting anti-Semitic slogans at the counter-protesters. In a separate report, the Jerusalem Post argued that the protesters were also waving placards calling Israel a “laboratory of police violence”.

According to the Prefect of Police, the incident has now been reported to “justice”.

​Many French politicians have already denounced the apparent instances of anti-Semitism that took place during the protest.

“The protesters who shout ‘dirty Jews’ and those beside them who do not react, do you claim to be ‘anti-racist’?”, Member of European Parliament and Former Minister of European Affairs of France Nathalie Loiseau wrote on Twitter. “You don't use the anti-racism cause, you use it and you get it dirty”.

The mayor of Nice, Christian Estrosi, has also condemned “anti-Zionist” banners and chants, calling upon the police to investigate and bring the guilty to justice.

“Antiracism that screams ‘dirty Jews’ proves its vile #racism!”, wrote another MEP Gilbert Collard, while supporting the counter-protest group for speaking up against “anti-white racism”.

Anne Hidalgo, the mayor of Paris, has so far not commented on the incident, but she has retweeted several posts both supporting the destruction of the “anti-white racism” banner unrolled by “Génération Identitaire” and those calling upon the organizers of the Adama Traore rally to condemn the use of anti-Semitic chants.