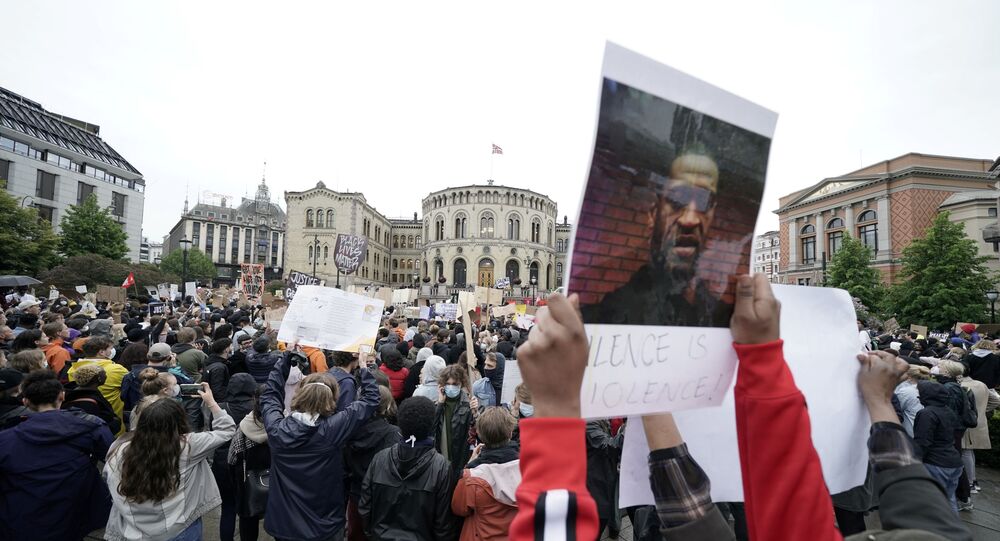 In the painting “Justice” (1762) by Mathias Blumenthal that hangs in Bergen's City Hall a white woman is treading on a prostrate, dark-skinned man. While the painting was meant to symbolise the battle of light and darkness, the Greens believe its symbolism no longer fits with today's situation.

In the wake of Black Lives Matter protests, calls have erupted to remove a 258-year-old painting from the City Hall of Bergen, Norway's second most populous city.

In the painting “Justice” (1762) by Mathias Blumenthal, which has been hanging in Bergen's City Hall since 1972, a white woman is treading on a prostrate, dark-skinned man. According to the Green Party, it resonates poorly with the current situation and is reminiscent of African American George Floyd, whose death at the hands of police during arrest sparked worldwide Black Lives Matter protests.

“It shows a white woman standing atop a black man, and she has prevailed. The symbolism got me thinking about the systemic racism the whole world is talking about for ages”, local politician Paul Richard Johannessen of the Greens told national broadcaster NRK, describing it as an “a-ha experience”.

Johannessen and his party questioned the appropriateness of such a picture in a city hall. According to him, the painting should be in a museum.

Art historian Siri Meyer at the University of Bergen agreed that the picture is not worth having on display in a city's top administrative body.

“The symbolism is very poorly adapted to our time. It is quite strange that no one has responded to the subject before. Now the artwork should be moved soon”, Meyer said.

“I think it should be hanging”, Henrik von Achen, the director at the Bergen University Museum said. He rejected the idea that the picture is racist, and called to view things from the context in which they were created.

“The beautiful nymph personifies the righteous Roman goddess Justitia who presses a fury under her foot. Furies in Roman mythology symbolised murder, fire, bad conscience, and other misery. The figure is painted dark because it belonged to the realm of death and the kingdom of darkness. The painter was engrossed by the contradiction between the light of the righteous and the darkness of hatred and murder”, von Achen explained.

He underscored that it is common cultural history, and the painting has never been racist.

The Greens were not impressed, however.

“I don't know what they were thinking, but it was a period when Europe conquered many parts of the world and established colonies everywhere. Norwegians were also involved in the slave trade, and the worldview they had at that time perhaps never questioned whether it was wrong or not. Those just took it for granted that they were right”, Johannessen said.

At the same time, in connection with Black Lives Matter a debate erupted in Bergen on renaming the district Møhlenpris, named after businessman and slave trader Jørgen Thor Møhlen. Activists believe it is time to talk about “the dark story behind Møhlenpris” that many Bergen residents don't know.

Local historian Jo Gjerstad said a change of name has no purpose or meaning.

“One cannot change a name that has been a part of the city's history for over 300 years. We cannot compare our morals with those people had hundreds of years ago. There are many places and streets named after people who did terrible things”, Gjerstad told the local newspaper Bergens Tidende.

African American man George Floyd's death at the hands of police in Minneapolis, Minnesota has sparked a worldwide movement against police brutality and social injustice, sweeping all of the US states and most of Europe. Many of the protests touted as righteous by activists and politicians turned into full-blown rioting with violence against police and civilians, acts of vandalism, arson, and looting.