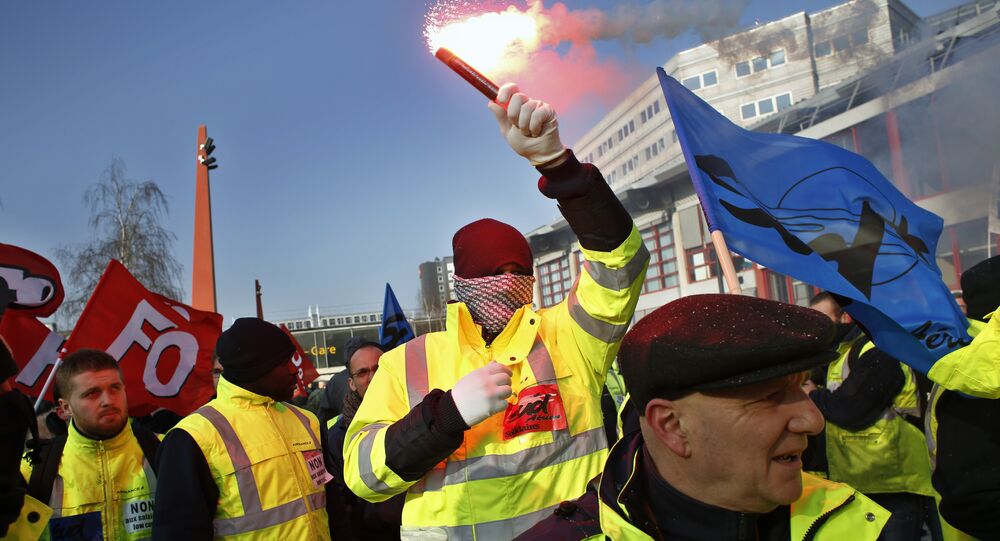 As Unemployment in France Soars Amid COVID-19, What Industries Feel Abandoned by the Government?

Announcing the second phase of lifting quarantine restrictions, French Prime Minister Edouard Philippe noted the necessity of the measures to overcome the crisis caused by the pandemic.

It was earlier announced that in April, France recorded a record number of unemployed: 840,000 more compared with March. There is no similar precedent in the history of statistics, which have been collected since 1996.

Could the French authorities have found a more worthy response to the pandemic than the quarantine? What lessons can be learned? What new "records" should we expect?

Here are three testimonies from lawyers, hospitality and event management workers, and a private transportation company.

Lawyers are protesting, in particular, against the automatically extended pre-trial detention that the authorities introduced during the quarantine. On 12 May, the "Black Robe Brigade" organisation, created as part of the anti-pension reform movement, went out to protest at Place Vendôme, despite the ban on gatherings involving more than 10 people. What slogan did the rally have? "We are counting the dead while our freedoms are quarantined".

"They forgot about us", Julia, a lawyer, said. "There are forgotten French people behind these forgotten lawyers, judges, court clerks and bailiffs... Some lawyers had no work. It was very difficult since we represent free professions and therefore we have no right to anything or any assistance", she recalled.

"For the first time since 1793, the government and French Justice Minister Bellubé have decided that extension [of detention] would take place automatically, without any hearing, without a judge, a lawyer, without the opportunity to submit any documents. This is a shame", the lawyer said.

"We are waiting for these freedom violating measures to end. We look forward to clearing action on the part of the government, which should abolish these measures taken amid a [health] emergency. We want everything to go back to normal", Julia concluded.

All lawyers agree that "after two months, when for epidemiological reasons the entire country was quarantined, people can return to work today... But all freedoms still remain quarantined, in particular the freedom of assembly, when more than 10 people aren't allowed to gather, for example, to express their disagreement with the government’s policy", Alexis, one of the lawyers who participated in the Place Vendôme protests, said.

"We believe that the government has a clear trend of not respecting fundamental freedoms. This is unacceptable", the young lawyer concluded.

On 26 May, at Trocadéro Square, 200 members of CPHRE (Сollectif des précaires de l'hôtellerie-restauration et événementiel), which consists of fixed-term hotel, restaurant, and event sector workers, used the Eiffel Tower, one of the symbols of Paris, to reach out to the government.

"The police have written out €135 fines to people who are already on the verge, who face injustice; more than 10 people per meeting have been fined", the CPHRE founder complained. "The emergency measures that the government took in the post-crisis period don’t mention us; the authorities have forgotten about us", he said.

"The hotel, restaurant, and event sector employs 2.2 million fixed-term workers. This is 10% of the active population of France. However, no support measures are provided for them", the CPHRE founder complained.

Among the protesters' demands is the extended right to unemployment benefits for those who lost this right during the quarantine period, as some have ended up without livelihoods. CPHRE demands a one-year grace period for those on the labour exchange – "for the sake of saving lives".

© AFP 2020 / FREDERICK FLORIN
A medical staff member wearing protective facemask and suit, and a face-shield, prepares to collect from a man and his daughter at a COVID-19 testing centre set up in the European Parliament on May 12, 2020

"We work in the tourism, hotel, and restaurant sectors, where France ranks first in the world. We are contributing to the country's economy and working in the field of UNESCO’s Intangible Heritage", CPHRE explained. "Among the 4,000 of our members, there are a lot of those who are now applying for active solidarity benefits (Revenu de solidarité active, RSA); there are families that no longer have any funds".

Bus drivers went to protest at the Champs Elysees. Some of them are "thinking of suicide".

Bus companies in the Île-de-France region, the "tourism engine", have organised a symbolic action to draw attention to the fate of those who were forgotten by the government's "Marshall Plan". Khalid Braija, the manager of a small passenger transport company, has explained why he took part in the action.

"We'll see many human dramas in the coming months", Khalid Braija said. "I know several people – I talked to them – who are thinking of suicide. If a firm goes down, they go down with it. They will have to face their life, their family, their children. Even if it weren't COVID-19 that created this plight, the situation is no less distressing". According to him, "there has been no work since January, even before the quarantine".

This has resulted in this company being in the red, because you need to pay both insurance and rent.

Despite partial unemployment and €1,500 payments from the COVID solidarity fund, Khalid Braija fears that once the isolation measures are lifted for everyone, there will be another danger for private bus transport in France: competition from abroad.

"Foreign players in passenger bus transportation are very harmful to our business. They will come in droves to sabotage Parisian transport because they work at half price compared to us and don’t pay fees as we do", Khalid Braija explained.

"Small and medium-sized businesses have been forgotten. I sacrifice a lot in my life: my days off, my family. We don’t mind paying, but we ask that the state help us when necessary. We just ask for support", Khalid Braija said.

"We are not the only ones; the sector’s activity has completely ceased: school trips are banned, outdoor events are no longer organised. And the government does nothing to help us", he complained. Moreover, carriers will also face problems when their activity resumes: how can the physical distance between passengers be maintained?

"When you say that 50 people will require two buses, people refuse because it’s too expensive", Khalid Braija explained. "Let the authorities abandon double standards. Let the same rules as for air transportation be applied to this sector. Everything is the same both here and there. We ask the French authorities to pay attention to us and support us", he said.