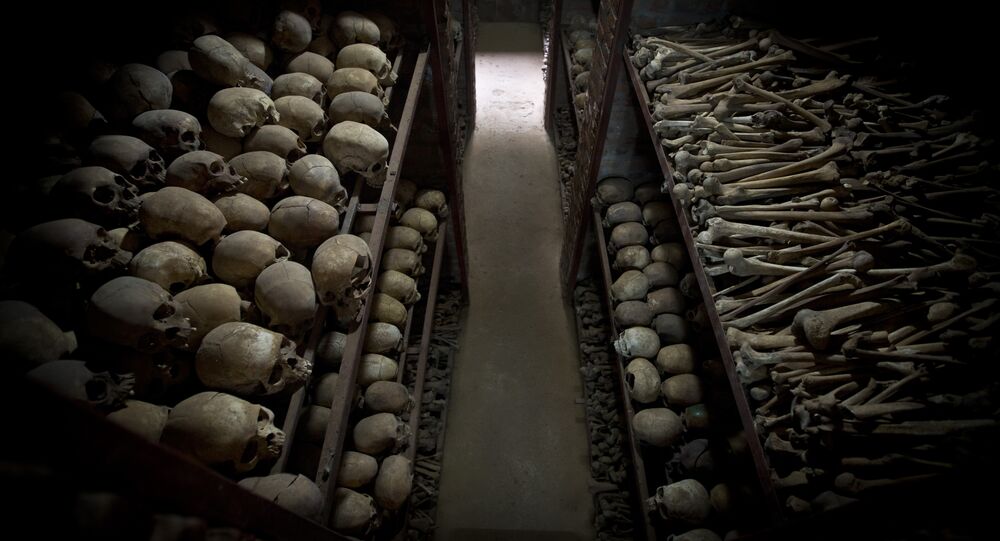 Rwanda Genocide: After 26 Years on the Run, France Sends Alleged Ringleader To UN For Trial

On 6 April 1994 a plane carrying Rwanda's President Juvenal Habyarimana - from the Hutu tribe - was shot down by a missile near the Rwandan capital Kigali. Hutu militias used it as an excuse to launch a genocide against the Tutsi minority, killing around 800,000 people.

A French court has ruled that one of the most wanted Rwanda genocide suspects, Felicien Kabuga, will be sent back to Africa to face trial.

Lawyers for 87-year-old Kabuga, who was arrested in Paris last month, had asked for him to be put on trial in France.

On Tuesday, 2 June, a court in Paris ruled his health was not an obstacle to his extradition but Kabuga's lawyers have asked another court to examine the decision, meaning he will remain on French soil for at least 10 days.

A US$5 million reward was offered by the US State Department for "individuals who furnish information leading to the arrest, transfer, or conviction" of Kabuga, a wealthy businessman who had bankrolled the genocide by importing 500,000 machetes.

Rwandan genocide criminal, Felicien Kabuga has denied playing any role in the genocide. He hid for 26 years.

A British firm's rep stated that it sold more machetes to him in 1 month than it did throughout 1993.

​He was arrested at his home outside Paris on 16 May after years in hiding and on the run.

A judge in The Hague said last month Kabuga should be tried in a war crimes tribunal in Arusha, Tanzania, under the Mechanism for International Criminal Tribunals (MICT).
But Kabuga’s lawyer Laurent Bayon says his client should be tried in France because of his age and health and he also questioned the impartiality of the court in Arusha.

​Mr Bayon wrote to MICT prosecutors: "If you decided to assert your jurisdiction over the French jurisdiction, thus putting Felicien Kabuga's life in danger, we would take the risk of giving up the truth, forever.”

After a missile brought down a plane containing Rwanda’s Hutu President Juvenal Habyarimana in 1994, Kabuga allegedly helped form the notorious Interahamwe militia which massacred tens of thousands of Tutsis and he also allegedly had a hand in Radio-Television Libre des Mille Collines which pumped out propaganda in which Tutsis were referred to as “inyenzi” (cockroaches).

KABUGA case: Decision on Prosecutor’s Request to Amend the Arrest Warrant and Order for Transfer has been filed. For more information:https://t.co/B85s7BwIev pic.twitter.com/tEbAv2dojd

​About 800,000 people were slaughtered over 100 days before Tutsi-led RPF rebels, led by Paul Kagame, ousted the government. Mr Kagame remains President of Rwanda.

After the genocide, Kabuga flew to Switzerland but was expelled before his importance was realised. He arrived in Kinshasa and eventually made his way to Kenya. In 1997 he slipped away when several other exiled Hutu leaders were arrested.

Kabuga was indicted on seven counts, including genocide, by the UN International Criminal Tribunal for Rwanda in 1997.

In 2002 Kabuga was almost captured. An informant set up a meeting with him in Nairobi but he was tipped off about it being a trap and fled. The informant was later killed.

In 2007 German authorities apparently came close to catching him in Frankfurt.

​It is not know how long he has been in hiding in France, which is also home to President Habyarimana’s widow Agathe, who has also been accused of instigating the genocide. France has always refused to extradite Mrs Habyarimana.

Last year Dr Phil Clark, a Rwanda specialist at the School of Oriental and African Studies, told Sputnik how France had been accused by Rwanda of having supported the ethnic Hutu and the Interahamwe militias.

Dr Clark said: "France had a very close relationship with the Habyarimana government leading up to the genocide. He was seen as the 'darling of France' because of his support for France's influence in central Africa. France saw Habyarimana as key to maintaining Francophone influence and stopping the RPF's Anglophone aggression. They saw the RPF as a plot by Britain and the US to expand Anglophone influence in Africa. The accusation from Rwanda is that France was directly involved in training the Interahamwe militias."