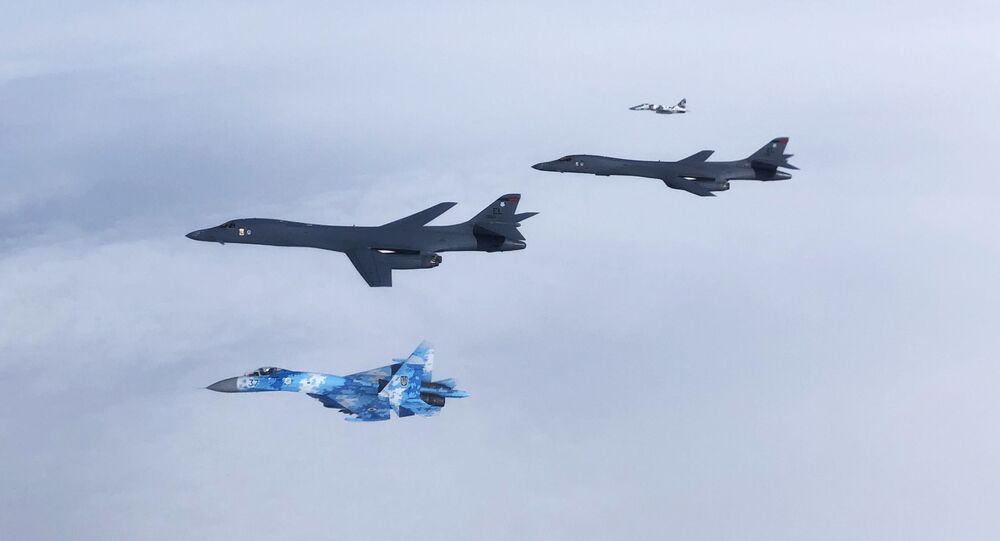 US B-1B Lancer supersonic bombers flew from their South Dakota air base to the Black Sea to drill with NATO partners and, for the first time, Ukrainian Air Force jets. The bombers carried a new anti-ship missile, posturing against Russia’s expanding Black Sea Fleet just as the US has against Beijing’s naval presence in the South China Sea.

In the latest dramatic display of force by Washington, two B-1B Lancer bombers flew from  Ellsworth Air Force Base in South Dakota to Eastern Europe and the Black Sea, linking up with a number of air forces, but most notably that belonging to Kiev, where the US helped oversee a pro-Western coup in 2014 by right-wing, Russophobic forces.

“Bomber Task Force missions to Europe demonstrate commitment to our allies and partners all while providing a clear deterrence message to any adversary,” US Air Forces in Europe and Air Forces Africa (USAFE) commander Gen. Jeff Harrigian said in a May 29 news release. “The integration of our strategic bomber presence across Europe proves that the US, alongside any ally or partner, stands ready to deter, and if needed, can employ these capabilities together.”

According to the release, the American bombers drilled with Polish F-16s and MiG-29s, Romanian F-16s and MiG-21s and Greek F-16s, in addition to Ukrainian Su-27s and MiG-29s. All countries except Ukraine are members of the NATO alliance; Kiev works with NATO as a partner and has repeatedly attempted to join.

In response, however, the Russian Air Force dispatched its own Su-27s as well as Su-30SMs, an upgraded version of the interceptor, to turn the bombers around as they closed in on the Russian border. The Lancers were originally designed for low-altitude sprints into the former Soviet Union to deliver an undetected nuclear strike.

However, the USAFE release failed to mention what exactly the Lancers were doing there beyond “familiariz[ing] aircrew with air bases, airspace, and operations in different geographic combatant commands.” A second release, by US European Command (EUCOM) on June 1, revealed the answer: they were training with the Long-Range Anti-Ship Missile (LRASM), a new, advanced weapon that is rapidly becoming the Lancers’ raison d’etre in the US bomber fleet.

“LRASM plays a critical role in ensuring US naval access to operate in both open-ocean and littoral environments due to its enhanced ability to discriminate between targets from long range,” Lt. Col. Timothy Albrecht, the Bomber Task Force planner for the 603rd Air Operations Center at Ramstein Air Force Base in Germany, said in the EUCOM release.

“With the increase of maritime threats and their improvement of anti-access/area denial environmental weapons, this stealthy anti-ship cruise missile provides reduced risk to strike assets by penetrating and defeating sophisticated enemy air-defense systems,” he added.

The Pentagon recently deployed four Lancers to Guam in the Philippine Sea to run similar maritime patrols over it and the South China Sea as a counter to China’s burgeoning naval forces. This deployment followed a series of globetrotting missions to Asia and Europe by Lancers based in the United States, much like this recent one to the Black Sea region, in demonstration of the Pentagon’s new “dynamic employment model” meant to keep adversaries on their toes by interrupting predictable force deployments.

With Romania on the southeastern flank of the NATO alliance and Russia’s naval presence in the Black Sea steadily expanding, some Western defense analysts have pushed NATO to upgrade its deployment in Romania. A May 26 paper by the hawkish Center for European Policy Analysis think tank in Washington, DC, advocated deploying new weapons in Romania, such that its standing equals the “Enhanced Forward Presence” of NATO in Poland and the Baltic States, which border Russia directly.