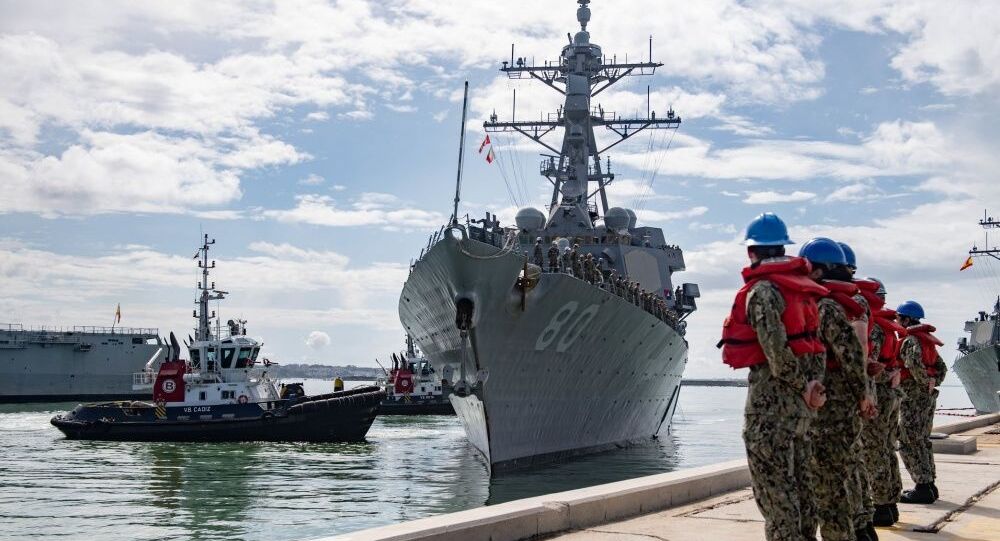 The US Navy destroyer USS Roosevelt arrived at the Naval Station Rota in southwestern Spain on Saturday, part of a plan to rotate out four warships that have worked the missile defense beat since 2013. However, as European Command has pushed for an even larger deployment to Rota, the Navy is being stretched increasingly thin.

The first of several US warships deployed to Spain began to rotate home on Saturday when its replacement, the Arleigh Burke-class destroyer USS Roosevelt, arrived in Rota, the Navy announced on Monday.

Not to be confused with the USS Theodore Roosevelt aircraft carrier, the USS Roosevelt is a guided missile destroyer sporting the latest upgrades, including the Aegis Baseline 9 missile defense system and the SM-3 anti-air missile.

“These capabilities vastly increase the sea-based BMD [ballistic missile defense] force structure and contribute to NATO's robust integrated air and missile defense (IAMD) architecture,” the Navy said in the release. The warship also brought along two MH-60R Sea Hawk helicopters, a naval variant of the Blackhawk used for hunting submarines as well as search and rescue.

The Navy began stationing a quartet of guided missile destroyers at Rota in 2013 following an agreement with Madrid to incorporate an additional node into the European Missile Defense System, a network of ballistic missile interceptors designed to protect against potential attack by Iran. However, in recent years the network has been touted as protection against Russian attack as well, expanding into former Russian allies Romania and Poland.

The Rota deployment has become a point of contention, however, between two sections of the Pentagon.

US European Command (EUROCOM) has been pushing for two more destroyers to be stationed at Rota, bringing the total to six warships. EUROCOM chief Air Force Gen. Tod Wolters argued before the Senate Armed Services Committee in February that “two additional ships [at Rota] would allow us the opportunity to improve our ability to get indications and warnings” of missiles coming from the East, according to Breaking Defense.

The Rota-based warships run patrols across the Mediterranean and up the western coast of Europe, including being used for offensive strikes on Libya and Syria, Defense News noted.

However, the Navy isn’t too pleased at the idea of sending more warships to Rota. In 2018, then-head of Fleet Forces Command Adm. Phil Davidson bemoaned the amount of support a single deployment requires, limiting the number of naval forces capable of being deployed to other theaters.

“I can tell you that the four ships I’ve got to send next, I’m already pulling them out of strike groups to do the modernization they need to go over there," Davidson said at the time, according to Defense News.

"Then I’m going to get four ships back that then are going to require their docking availability and some modernization as well,” he said. “Pretty soon this looks like eight ships that are out of the strike group rotation for three years. We’re going to need a bigger Navy to apply that kind of policy.”

Instead, the Navy has pushed for construction of an Aegis Ashore station at Rota in order to provide the same protection but at drastically reduced manpower and ship demands.

In 2018, then-US Chief of Naval Operations Adm. John Richardson told a symposium at the US Naval War College that “10 years down the road, it’s time to build something on land to defend the land. Whether that’s AEGIS Ashore or whatever, I want to get out of the long-term missile defense business and move to dynamic missile defense.”

In addition, a shore station takes roughly 33 people to operate, while a Burke-class warship needs a crew of more than 200.

As of now, there are no plans to build such a system in Spain, but even if they are drawn up, the move will be sure to anger both locals and international powers. In Japan, protests against a planned Aegis Ashore installation in Akita have forced Tokyo to back down, and in Romania, the quick conversion of Aegis Ashore from defensive to offensive capabilities following the US withdrawal from the Intermediate-Range Nuclear Forces (INF) Treaty elicited strong protests from Moscow.