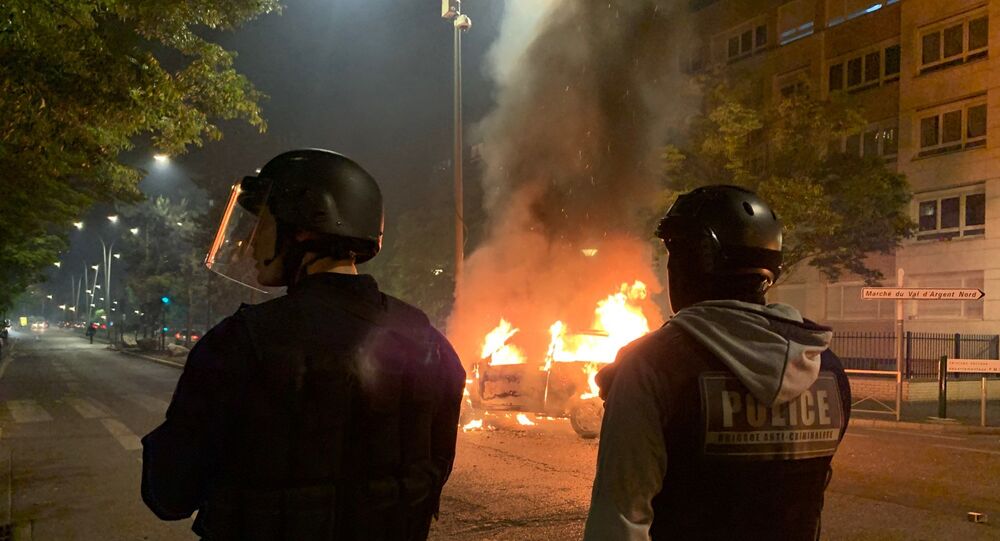 Tensions were running high on the outskirts of Paris for a second night in a row after the death of a teen motorcyclist that angry locals blamed on police. Six people were arrested and dozens of fires were set in the streets, according to local media reports.

Groups of youths took to the streets of the Parisian suburb of Argenteuil on Monday protesting the death of Sabri Choubi.

Choubi, 18, died after colliding with a concrete pole overnight in the suburb of Argenteuil on Saturday evening. Some members of the community claimed that he crashed into a police car.

Choubi's family filed a formal complaint against the police, triggering an investigation into the circumstances of his death. The prosecutor's office announced on Monday that preliminary results of the investigation indicate there was no evidence of collision with a police vehicle. Reports have also emerged in local media that Choubi was wearing no helmet at the time of the incident.

Protests have since flared in the suburb for two days straight. Dozens of riot police officers were deployed to the area on Monday night to quell public anger.

​Harrowing videos from the scene show that the protesters launched fireworks and other projectiles at the officers from behind flaming barricades and set small fires in the streets. Police responded with tear gas.

Le Parisien reports, citing a law enforcement source, that three cars were set alight and a total of around 20 fires were recorded in the area on Monday night. The same source told the magazine that three officers were injured and six people were arrested.

​Parisian suburbs often witness scenes of violence as locals protest against perceived police brutality. Last month, skirmishes broke out for several consecutive nights after a 30-year-old motorcyclist was critically injured in a collision with the door of an unmarked police car. Locals claimed that the door was opened on purpose but, according to French media, CCTV footage backed the version of the authorities that there was no police misconduct.