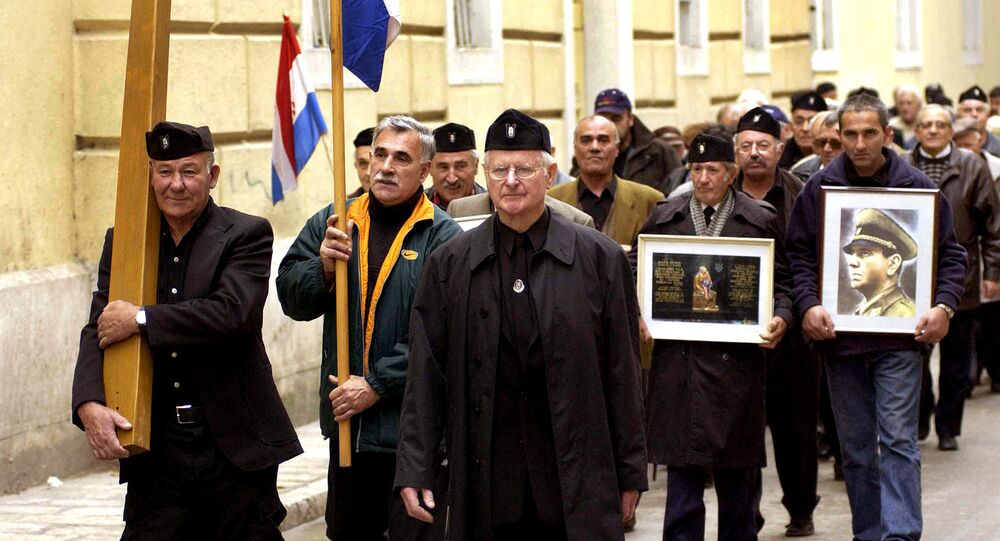 In the run-up to the mass, the cardinal earlier said that such a religious gathering was not meant to celebrate anyone, but to commemorate “innocent victims”.

Anti-fascist protesters staged a march in Sarajevo as the Catholic cardinal served a mass for "Bleiburg victims” - a group made up of pro-Nazi militants as well as civilians, executed by Yugoslav partisans at the end of World War II.

The protesters blasted the mass, which was attended by no more than 20 people due to the coronavirus lockdown, deeming it a concealed attempt to rehabilitate Nazi collaborators, more specifically Croatia's Ustasha militia that closely linked to the wartime fascist regime in Zagreb.

With its support, the Ustasha subjugated large swathes of Croatia and Bosnia, where they predominantly targeted Serbs and Jews during World War Two.

As the war drew to an end, the Ustasha militia implemented a brutal terror campaign in Sarajevo, with the city seeing an atrocious public hanging of 55 of the city's residents. Over 10,000 residents of Sarajevo are believed to have lost their lives during the occupation.

"My two grandfathers, their brothers and my grandmother were all killed by these fascists who have been honoured today”, 63-year-old retired electro-technician Cedomir Jasksic shared with Reuters adding that it is “not normal” for a city like Sarajevo to “allow something like this to happen”.

Catholic Zvonimir Nikolic portrayed the mass as a "disaster for Sarajevo”, while Bosniak Sead Sahovic, who was born in the Ustasha concentration camp Stara Gradiska, ripped the commemoration as a "horrifying farce”, per Reuters.

The decision to hold the mass likewise met a barrage of criticism in Bosnia & Herzegovina, while also being condemned by the Israeli sand the US embassies.

However, the Croatian parliament endorsed the event, and the country's ambassador to Sarajevo attended the Saturday mass, media reported. Cardinal Puljic earlier shrugged off the accusations of lauding Nazi collaborators. In his comments to Croatian Catholic Radio, Puljic said that "the Church has always respected innocent victims" stressing that such a religious event as the mass was not intended to celebrate anyone, given the fact there were also civilians in the Ustasha. “A crime cannot be defended by (another) crime”, the cardinal said.

High Treason: Nazi Collaborators Who Found Themselves on the Wrong Side at War’s End