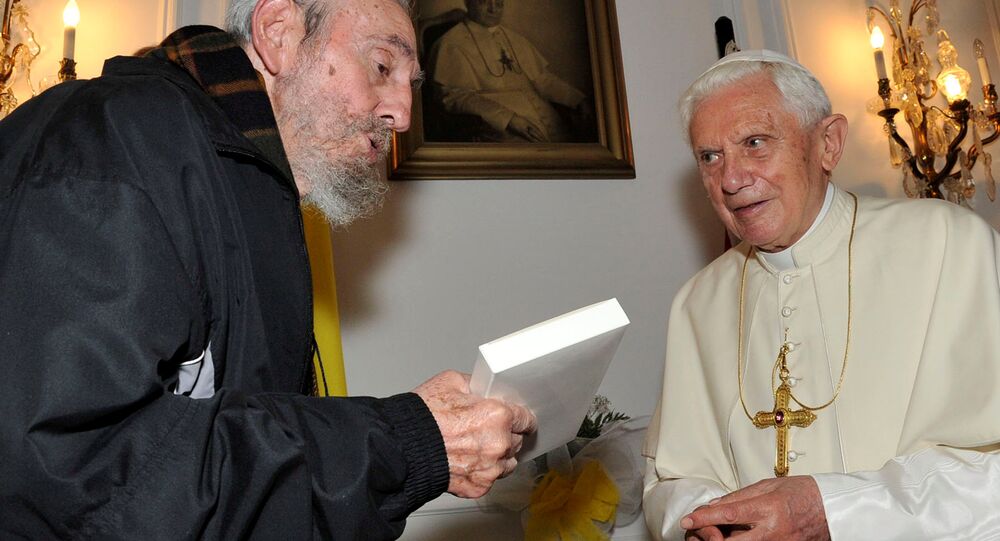 Former pope Benedict XVI, who dramatically resigned in 2013, was often criticized for his attitudes to social issues such as diversity, and attempting to undermine the modernisation drive of his successor Pope Francis.

Former pope Benedict XVI (Joseph Ratzinger), known for his stringent traditionalism, has claimed that his opponents sought to "silence" him, in a new authorised biography, "Benedict XVI - A Life", that was published in Germany on Monday, reported AFP.

"I would rather not analyse the actual reasons why people want to silence my voice," says Benedict in the biography.

Referring to reactions to his continued interventions in theological debates, the 93-year-old former pope insisted he was victim to a “malignant distortion of reality”.

“The spectacle of reactions coming from German theology is so misguided and ill-willed that I would prefer not to speak of it.”

In the new biography, the retired pontiff yet again openly deplored gay marriage.

"A century ago, anyone would have thought it absurd to talk about homosexual marriage. Today those who oppose it are excommunicated from society... It's the same thing with abortion and creating human life in the laboratory," says Benedict.

"The real threat to the Church... is in the global dictatorship of purportedly humanist ideologies."

Touching upon accusations that were levelled against him of allegedly undermining the attempt to modernize the Church espoused by his successor Pope Francis, Benedict XVI insists in the biography that his "personal friendship with Pope Francis has not only endured, but grown".

© AP Photo / Andrew Medichini
Faithful watch Pope Francis deliver the Angelus prayer on a giant screen to avoid crowds gathering, in St. Peter's Square, at the Vatican, Sunday, 8 March 2020. The pope in his streamed remarks said he was close in prayers to those suffering from the coronavirus and to those caring for them.

A theological conservative staunchly biding by traditional views on Catholic values, Benedict XVI had originally vowed to stay "hidden from the world" after retiring.

Yet he has persisted in openly declaring his views in articles, books and interviews. His approaches are believed to be dramatically different to those of Pope Francis, perceived as more “progressive”.

In early 2020 the former pope found himself at the heart of Vatican intrigue, as he requested the removal of his name as co-author of a controversial new book, From the Depths of Our Hearts, where he voiced his opposition to allowing married men to become priests.

In the book, Pope Benedict insisted that celibacy had "great significance" as it allowed priests to focus on their duties.

The intervention had come just weeks before his successor Pope Francis was expected to publish a document on whether married men could be ordained in the Amazon, where there was a shortage of priests.

Some perceived the intervention as undermining nature.

In office from 2005-13, Benedict XVI was also frequently criticised for his attitudes to Islam, and was especially berated for a 2018 controversial essay in a German-language theological journal where he was accused of fostering anti-Semitism.

The retired pontiff's text on Jewish-Catholic relations in an issue of Communion fired a debate around his denial the Catholic Church ever adopted "supersessionism."

The latter, dismissed by Jews who reject this view as Christian “arrogance”, is a theological belief that God's covenant through Christ replaced the covenant God made with the Jewish people.

"Whoever describes the role of Judaism like this is building the foundation for a new anti-Semitism on a Christian basis," Rabbi Walter Homolka, executive director of the School of Jewish Theology at Potsdam University in Germany was cited as saying by the National Catholic Reporter.

The former pope who unexpectedly resigned as leader of the Catholic Church on 28 February 2013 became the first to relinquish the office since Gregory XII in 1415.

At the time, the Pope cited his declining health due to old age as the reason for his decision.