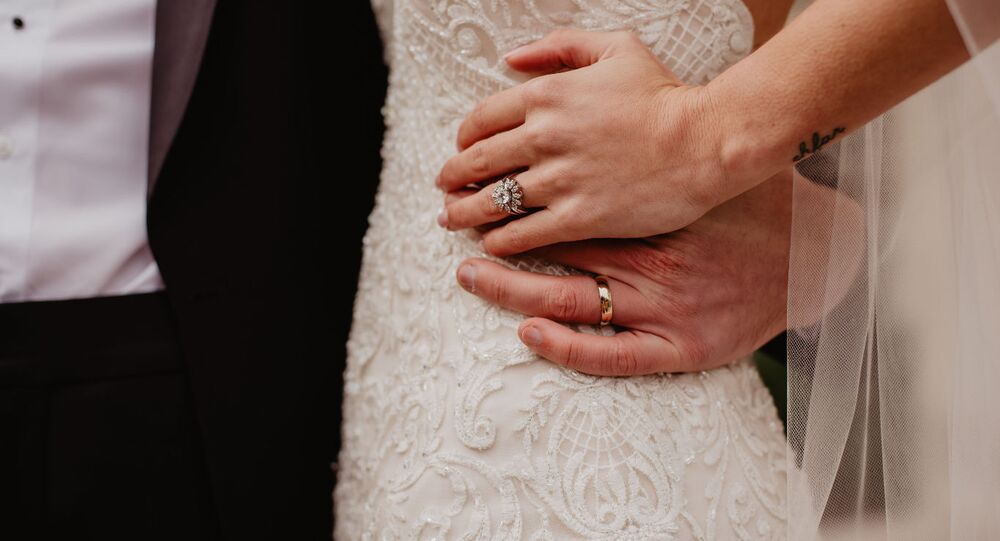 No Guests and Kisses: Weddings in Serbia Amid Epidemic

It seems that Serbia will have to postpone weddings until the end of the epidemic. Wedding organizers have shared details of how hard it is for event companies to cope with a state of emergency when events are cancelled or postponed several months in advance, and organizers suffer huge losses.

The only way to get married amid the coronavirus epidemic in Serbia is to hold a modest ceremony in the Municipality, with no guests, wearing masks and gloves over wedding rings.

Due to the epidemic, the ban on mass gatherings, the closure of restaurants and cafes, and curfews, most couples have had to cancel or reschedule their weddings.

Couples that have adequately assessed the prospects for the coronavirus situation development started postponing their weddings from May and early June to the second half of the year, but not all sites could do that since many of them were already occupied on those dates. As a result, many sites started offering to hold weddings on Tuesday or Thursday instead of the weekend.

“Talking to our clients, I know that few of them were happy with that option. They have divided into two categories: some started looking for other venues that still had unoccupied weekends, others postponed their weddings for the next year or cancelled them. Those who have cancelled celebrations, got their money back,” Nikola Jankovic, the owner and manager of the Epic Event Agency, said.

Weddings are Rescheduled or Cancelled

According to wedding organizers, in May there will be almost no weddings; and holding weddings in the coming months remains a big question.

“All May weddings have been cancelled and rescheduled for autumn. Orders for June are still holding. We are waiting for the situation to develop; our customers are waiting as well. As for new orders, there is no demand now,” Ivana Todorovic, manager of the Grand Ada restaurant, said.

The biggest problem is the uncertainty associated with the time of reopening of restaurants. Because of this, wedding planners and their customers end up in a difficult situation.

“All weddings from March to late June have been cancelled. Our biggest problem is that we don’t know when we’ll start working again; we don’t have any information to respond to the situation and explain to our clients what dates the weddings should be rescheduled for and when we’ll be able to hold them,” Branko Sindjelic, the owner of the Glamor event agency, said.

He clarified that his agency had cancelled five of nearly 30 weddings; those weddings that hadn’t been cancelled were postponed to the next year or the second half of this year, which the company hasn’t sold since the state of emergency was introduced, reasoning that they would need this time to reschedule weddings.

According to wedding organizers, there’re various reactions to what is happening, depending on how couples manage to respond to the current situation.

“Some were in panic, some have managed to maintain a rational approach, and some couples still haven’t cancelled the wedding. I have two more orders in May, which haven’t yet been cancelled. I think these people are doing the right thing. I personally think that the ban and all measures associated with it will be lifted in the next two weeks,” Jankovic suggested.

The owner of the Epic event agency speaks of the enormous losses businesses in this area suffer, because salaries and rents must be paid monthly, despite the fact that there are very few or no orders at all.

“We are a young event agency, and we had unoccupied dates in the second half of the year; but now weddings rescheduled from May and June actually have occupied the dates, which we could have sold to other clients, which will directly affect our profit,” Jankovic explained.

Sindjelic agrees with him, assessing the current situation surrounded event businesses as “terrifying”:

“There are simply no words to describe how all this is destructive for us. We have about 50 employees who we need to pay salaries to. These are really huge financial losses, and we have zero profit now.”

According to wedding organizers, it’s especially hard because their work has always been seasonal.

Jankovic suggested those event companies that organize corporate parties would face an additional blow in the second half of the year. He is convinced that large companies will cut funds for entertaining their employees, which are usually included in the budget for the end of the year.

In addition, according to Jankovic, the number of guests at weddings and parties will be reduced by at least 30%, because older people will be afraid to attend such events, while foreign guests simply won’t be able to come.

You Can Still Marry Without Guests and Wearing Masks

Nemanja Djurovic, an assistant to the state registrar of vital records in the Belgrade community, confirms that at the request of the spouses, most registrations have been postponed and that at the moment there are very few couples who want to get married.

“All marriage registrations that were supposed to take place at venues chosen by the newlyweds, in restaurants, etc., have been cancelled. Most registrations that were supposed to take place in the Municipality have been cancelled as well. People don’t want to register their marriages amid current restrictions on public gatherings. Still, the wedding is a wonderful event, and the people who attend it are important, they complement the impressions of the moment,” Djurovic explained.

However, if someone still wants to register their marriage, they can still do that taking all the necessary precautions. Only five people can attend the ceremony: the couple, the registrar, and two witnesses. Moreover, all participants should wear masks and gloves. According to Djurovic, three marriages have been registered during the state of emergency in Belgrade’s Zvezdar community.

“The wedding ceremony is standard, but there is no kissing. The newlyweds still exchange rings. They take off a glove, put on a wedding ring, and then put on the glove again,” the assistant registrar concluded.