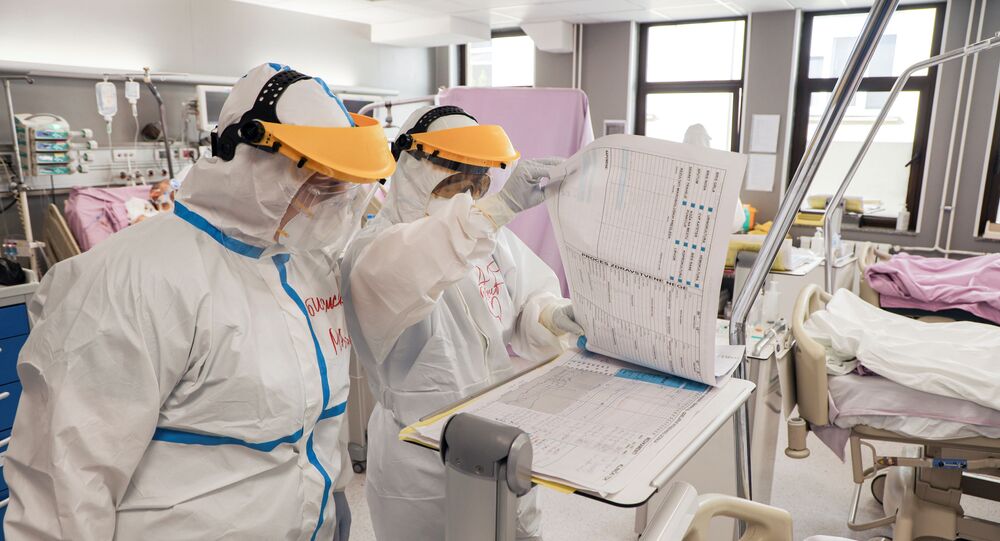 Serbian Neuropsychiatrist on COVID-19: During Yugoslavia Bombings At Least We Knew Who Our Enemy Was

In just two days, during three hours of free phone consultations, Neuropsychiatrist Dr Slavica Djukic Dejanovic received about a thousand calls from Serbs overcome by fear because of the coronavirus pandemic and who were in need of professional help. She told Sputnik who it was that turned to her for advice and what problems these people had.

Slavica Djukic Dejanovic notes that she simply could not physically answer all the calls, but promises to continue counselling. Every evening, for an hour and a half starting from 9 p.m., she talks to everyone who is experiencing mental problems. She has published her personal phone number so that fellow citizens can call her.

The neuropsychiatrist points out that despite prejudice in Serbian society that it’s embarrassing to seek psychological and psychiatric help, many have considered her initiative quite useful. The conversations are anonymous, while the people calling Djukic Dejanovic can see her, and she can see them only if they want her to. However, she stresses that a patient’s facial expression and physical manifestations are extremely important for neuropsychiatry: they have diagnostic value.

“Taking into account missed calls, about 400 people called me on the first evening. I was able to talk to 24 of them. On the second evening, there were 557 calls, I managed to talk with 22 callers. I expected 10-15 calls per evening”.

According to Djukic Dejanovic, people aged from 17 to 75 have called her, but the greatest number of those interested in talking to her was among women aged 25 to 45. The main problem most callers faced was various manifestations of fear.

Some of them have recognised their fears and said that they are afraid of the unknown, that they are afraid of getting sick and worry for their loved ones. According to the expert, these kinds of fears are rational and they are the least dangerous. She says that it’s good when a person knows what exactly they are afraid of; in such situations, everyone is afraid to a certain extent, and it’s necessary for people to recognise the seriousness of the situation. In such cases, Djukic Dejanovic recommends a rational conversation.

“Another type is irrational fear. For example, people say that they are not afraid but their heart is pounding, they can’t breathe, and they sometimes have the feeling that they can fall, die or lose their mind. These are panic fears. It’s really necessary to give some recommendations here. First of all, this is needed so that a person can learn to control their fears”, the neuropsychiatrist explains.

She adds that for such people, she explains how to breathe the right way, how to relax their neck, arms, and legs if they cramp.

“Nothing helps as much as realising that you can control your fear without any medicine and without a therapist”, the specialist says.

According to Djukic Dejanovic, there were also people with pathological fears. She explained that with this category of fears, we are talking about patients who are seriously ill, divorced from reality: they live in their own world and they are seized with the feeling that someone is pursuing them, that their life is in danger. Such fears are treated medically under the supervision of a psychiatrist.

She notes that there were also depressed individuals who, by their nature, are prone to pessimism, accusing themselves of not being able to best arrange their lives in this situation. There were also those who have insomnia issues.

“I was surprised that most of all college- and university-educated people called”, Djukic Dejanovic says.

She also points out that for the most part it was residents of Novi Sad, Niš, and Belgrade, where the likelihood of contracting the coronavirus is much higher, who called her.

According to her, this is primarily about representatives of the so-called “sandwich generation”, people who care about both their children and parents and are characterised by an increased sense of responsibility and anxiety generated by doubts regarding whether they will cope with everything.

“There were also ordinary people who are worried about survival, those who exist on a salary, who need to ensure their life continues when all this is over. They are haunted by a feeling of uncertainty about tomorrow”, the neuropsychiatrist says about her “clients”.

People Don’t Know Who Their Enemy is

Speaking about whether this is the first time that she has decided to help people as a mental health specialist, Djukic Dejanovic says that she had a similar experience during the 1999 bombing of Yugoslavia. Back then, she was the head of the Clinical Centre in Kragujevac, where she spent 72 of the 78 days of the bombing. According to her, her employees then felt a great need for her, not only as a director but also as a psychiatrist; and she gave advice to everyone who needed it.

“At least during the bombing, we knew who our enemies were; we could foresee their actions, we could find support in the human factor, and this expectation was not full of such uncertainty”, she says.

© AP Photo / Slobodan Miljevic
Russian Aerospace Forces Send 2 More Planes to Serbia to Fight COVID-19
Now, according to her, people are faced with the unknown: no one knows how long this will last, people don’t know who their enemy is – because the virus can mutate and it is unknown whether this mutation will become even more dangerous.

Djukic Dejanovic stresses that amid fighting global problems, it’s worth using global experience; that when in doubt, a person must believe in their body, in themselves, whether they can cope.

“It will end. The fact is that we have all ended up hostages of this dramatic situation; solidarity and reliance on others is extremely important, but, of course, with respect to social distance”, she concludes, urging everyone to stay at home to prevent further growth of the pandemic.