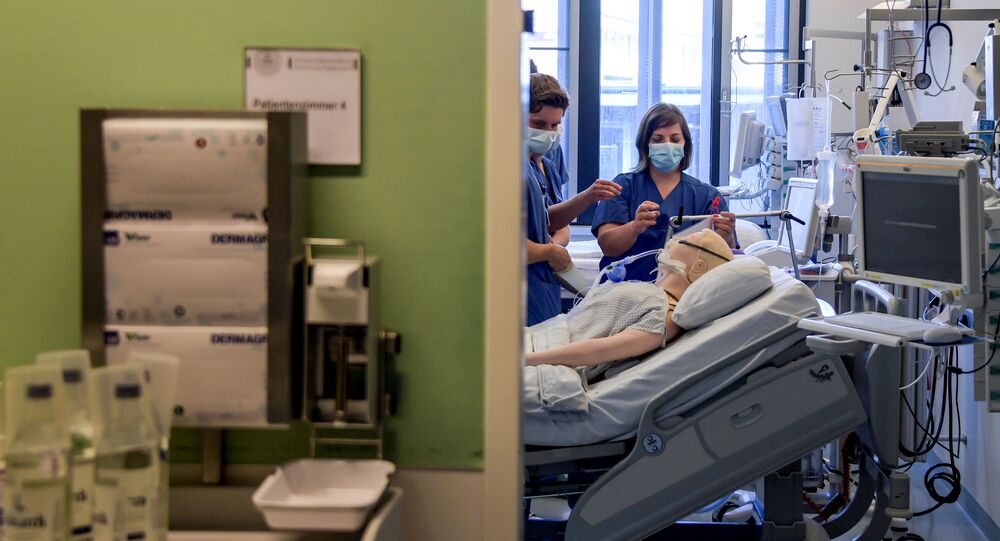 All of a sudden a COVID-19 test taken by 47-year-old Beatrice from Freiburg, Germany came back positive. A few weeks later, she confirms that "there is life after coronavirus", expressing strong support for government measures to restrict social contacts.

It is still hard to measure the effectiveness of staying home and restricting social contacts amid the coronavirus pandemic in Germany: to date, 61,913 people have been infected in the country, of which 583 have died, according to the Robert Koch Institute (RKI). This is ten times more than ten days ago.

According to official statistics, more than 16,000 coronavirus patients have already recovered in the country. One of them is Beatrice from Freiburg. After Bavaria and North Rhine-Westphalia, Baden-Württemberg ranks third in the number of cases among the federal states of Germany: as of Tuesday, there were 12,334 cases and at least 165 deaths. Patients suffering from the most severe form of the disease and having breathing problems are treated in hospitals. According to many, including Beatrice, the disease follows flu patterns.

For the 47-year-old teacher, it all started on Sunday, 8 March, when she felt the first symptoms. Still, she does not have the slightest idea where and how she got infected, because "in the south [they] still have very few cases".

“On Sunday evening, I just felt weakness in the limbs and a headache; and then, on Monday, I went to the university clinic and they tested me there”, Beatrice recalls. That evening, she received a notice that the test was positive. "It came as a surprise, because still there's almost no one around me who would be infected".

Did the Doctor Prescribe Anything for Her?

"I did not communicate with a doctor, only with the Health Department", Beatrice replies. "They called me regularly and told me that if things got worse or if I had problems with my lungs or breathing, I would have to go to the hospital".

So, she was not prescribed any medication but was just asked to remain in voluntary self-isolation for two weeks from the onset of symptoms. "Then I told my friends whom I had met on the weekend that they should stay at home too", she adds.

By her own account, Beatrice spent three to four days in bed, experiencing heaviness in the joints and a headache. At the same time, she had neither a fever, nor a cough, nor throat or lung problems, nor diarrhoea - despite all the fears demonstrated by the people who feverishly hoarded toilet paper amid the pandemic. Her senses of smell and taste remained intact. Remarkably, she was not vaccinated against pneumococcus or any lung problems in the past.

“Four days later I somehow got to my feet, but still felt very bad. I had only taken ibuprofen until I learned from the media that it was better not to do this", she says. "But I can’t say that the infection had anyhow increased because of ibuprofen". Health Department employees called the woman almost every day and asked her about her health.

© REUTERS / Andreas Gebert
A medical employee presents a smear taken at a special corona test center for public service employees such as police officers, nurses and firefighters during a media presentation as the spread of the coronavirus disease (COVID-19) continues, in Munich, Germany, March 23, 2020

Beatrice recollects that when she was tested for the coronavirus, there were no queues for the procedure, as "at that time the infection was not really discussed". So, the school where she works was not closed until a week later. Why?

"After my illness, I had a conversation with the Health Department service. Since I was not at school on Friday, and the symptoms of the disease appeared only on Sunday evening, the management assumed that I had been infected two days earlier. So they saw no danger in me", Beatrice explains.

Although none of her acquaintances contracted the disease after meeting her, the woman feels almost certain: many are infected, but they do not know about it. This was exactly what happened in her family: "The four of us spent two weeks at home, and the others went through it in a weaker form, and they were not tested", she notes.

Beatrice's friends and her brother provided the family with all the necessary goods and products for two weeks, leaving the groceries in front of the door, keeping a distance, saying "hello" to the owners of the house, and then leaving. However, they did not wear protective masks or gloves.

Beatrice says that her friends gave her a lot of encouragement and urged her not to worry that she could have infected them. On the other hand, some of her colleagues at school were really scared. “It’s rather difficult to ignore this since such a reaction is always very personal", she notes. "I’m going out, but no one should be afraid of me because I am no longer a virus carrier".

Why is Beatrice Sure that She Has Recovered?

"The Health Department employees are so busy now that they cannot check everyone afterwards", she explains. "They just said that I should stay at home for two weeks from the onset of symptoms. As a rule, the disease disappears during this time, then for a maximum of four to five days you can remain contagious, but after that you have no symptoms at all". Her son had to stay at home a week longer after his symptoms. However, Beatrice, presumably, will remain immune to the disease for a year at least, which also means that she is no longer contagious.

Last week, the Office of the Federal Chancellor announced that the restrictions imposed so far with regard to the COVID-19 pandemic will remain in force without any relief until 20 April. Elderly people will have to avoid contacts significantly longer than young citizens. Beatrice believes that the tough measures are justified and hopes that the growth in the number of coronavirus cases will slow down.

"Some of my friends said that there had been five of them walking around the city and all of them contracted the disease. Two of them were hospitalised. After all, we don’t know what will actually happen, and who will get seriously ill", she says. However, she believes that 80% of coronavirus cases are not severe.