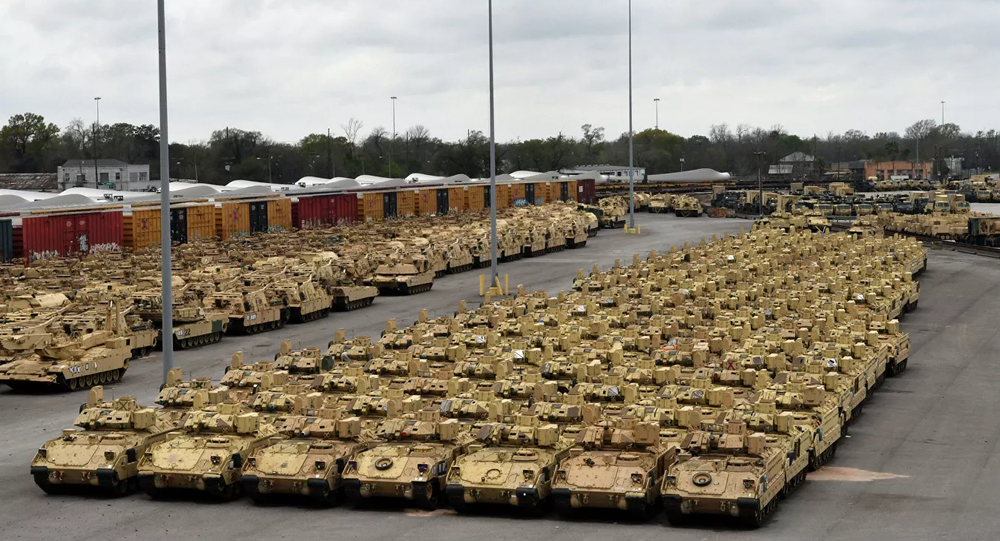 With much of its top brass in self-quarantine and the US State Department recommending against travel, US Army Europe has canceled the deployment of thousands of US troops to Poland for massive war games aimed at Russia.

The upcoming Defender Europe 2020 drills, which would have involved forces from numerous NATO countries, including 20,000 from the United States, have been “modified … in size and scope” in response to the burgeoning COVID-19 pandemic.

“As of March 13, all movement of personnel and equipment from the United States to Europe has ceased,” US European Command (EUCOM) said in a Monday news release. “The health, safety and readiness of our military, civilians, and family members is our primary concern.”

The EUCOM release notes that the Dynamic Front, Joint Warfighting Assessment, Saber Strike and Swift Response linked exercises have been canceled and that US forces sent to Europe to take part in the drills will be brought home, but that forces already deployed to Europe will still participate in other drills with NATO members.

However, Germany has already announced its withdrawal from the war games, and with its central European hub in lockdown and the Pentagon wary about further deployments to Europe, which the World Health Organization now considers the epicenter of the COVID-19 pandemic, EUCOM had little other choice.

Bruce Gagnon, coordinator of the Global Network Against Weapons & Nuclear Power in Space and a contributor to Foreign Policy In Focus, told Radio Sputnik’s Loud and Clear Thursday that the Pentagon’s concern is encircling Russia, not the health of its soldiers and their families.

“This is all part of the US effort to really encircle Russia, to try to get them to spend more money on the military, trying to destroy their economy, et cetera,” Gagnon told co-hosts Brian Becker and John Kiriakou.

Gagnon noted that photos released by the Pentagon showed US military officials arriving in Europe by plane, “shaking the hands of a long line of dignitaries, American military brass and European-NATO brass.”

“Imagine some of the people passing on the virus [from] one to the other,” he said.

Indeed, US Army Europe commander Lt. Gen. Christopher Cavoli, as well as several members of his staff, have been in self-quarantine since early this month when they possibly came into contact with the virus at his Wiesbaden, Germany, headquarters, Stars and Stripes noted.

US Air Force Brig. Gen. Paul Friedrichs, the senior health official for the Joint Chiefs of Staff, has said he believes that COVID-19 cases in the armed forces are underdiagnosed.

“It is likely that the number is higher,” he told reporters on March 10. “I think it is likely given what we are seeing around the world.”

Despite this, the Washington Post noted on Thursday that top NATO brass was taking “a stiff-upper-lip” response to the pandemic, continuing to have its meetings in person in Brussels.

"Some of our exercises have been modified or canceled ... but our forces remain ready," NATO Secretary-General Jens Stoltenberg told reporters in a Thursday conference conducted by video.