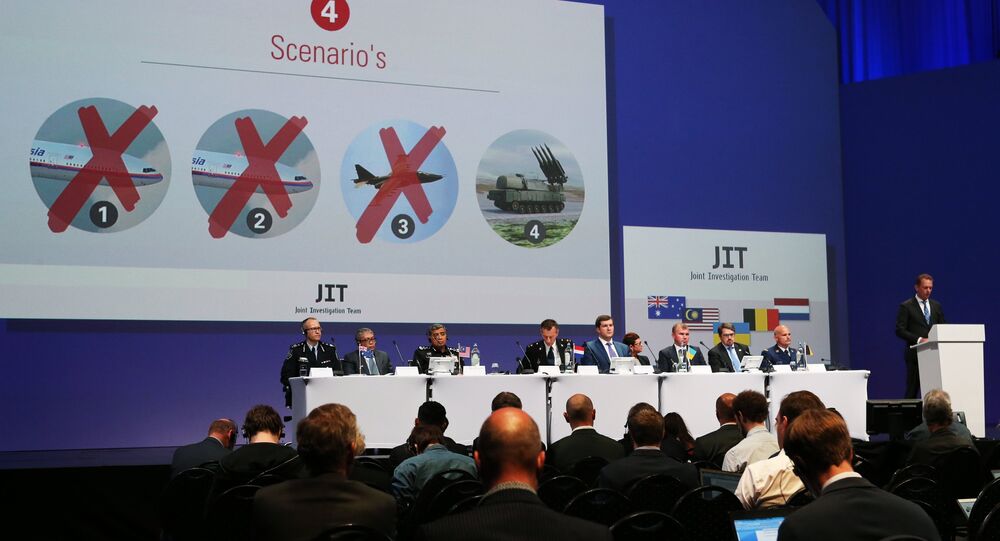 AMSTERDAM (Sputnik) - Since the Dutch court is not obligated to translate all the materials related to the MH17 crash case — with the case file consisting of 36,000 pages — the Russian defendant may be left without the possibility to study all the documents, a representative of a district court in the Hague told Sputnik on Thursday.

"If the defendants are present in the courtroom and cannot understand Dutch or English, the judge will provide a certified interpreter. Translation of the file case can be provided by the lawyer of the defendants, but not by the court. The court is in Dutch, so all files and hearings will be in Dutch. No translation other than an interpreter is obligatory", the representative said.

© AFP 2021 / KOEN VAN WEEL
Sabine ten Doesschate (C) and Boudewijn van Eijck (R) lawyers of suspect Oleg Pulatov sit in the courtroom at the Schiphol Judicial Complex, on March 10, 2020 on the second day of the trial of four men accused of murder over the downing of Malaysia Airlines flight MH17 in 2014

"Judging by my experience, related to availability and busyness of qualified staff, it will take one and a half years at least to translate all these documents", Elena Tais, the head of the Netherlands-based Russian translation agency RLTS, told Sputnik, adding that the case file consisted of 36,000 pages.

The hearings began at the Schiphol Judicial Complex on Monday and Tuesday and will continue on 23 March. Russian nationals Igor Girkin, Sergey Dubinsky and Oleg Pulatov, and Ukrainian national Leonid Kharchenko are the defendants. Pulatov is represented by an international group, uniting two Dutch lawyers and one Russian lawyer, while the others are tried in absentia.

© Sputnik / Maxim Blinov
Pieces of the Boeing 777 Malaysia Airlines (flight MH17) , which crashed in 2014 on the territory of Ukraine

The prime minister of Malaysia, which lost 43 people in the tragedy, also criticised the results of the investigation, which he called "politicised".

Russian President Vladimir Putin condemned the report for failing to address "a lot of questions" that remained unanswered, adding that the JIT did not plan to investigate the tragedy but to "appoint perpetrators" instead.