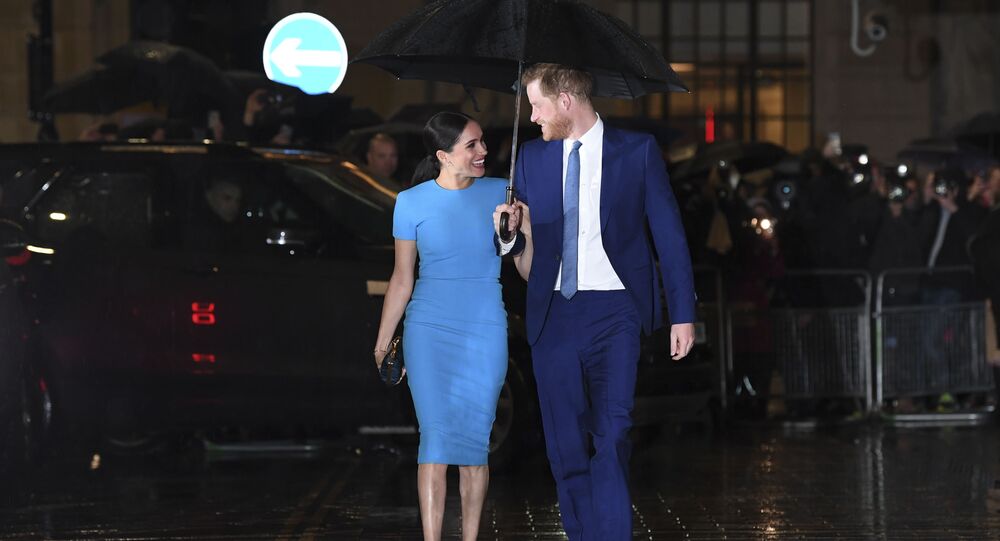 The extraordinary calls were allegedly recorded on New Year’s Eve and 22 January, on the landline at the Duke of Sussex’s retreat on Vancouver Island, Canada.

Prince Harry has reportedly been tricked into opening up about Megxit and revealing that he was “completely separate” from the Royal Family in two phone calls he believed he was conducting with teen climate activist Greta Thunberg and her father, reported The Sun on 10 March.

In reality, claims the publication, the Duke of Sussex was pouring his heart out to notorious Russian pranksters Vladimir Kuznetsov and Alexey Stolyarov, AKA Vovan and Lexus.

One of the alleged calls, conducted on New Year’s Eve and 22 January, was recorded and purportedly published on the pair’s YouTube channel, vovan222prank, with an animated cartoon of Harry and Greta, although the footage currently does not appear to be available.

In the call, the Duke of Sussex revealed, according to the outlet, how much of a struggle Megxit was for him and Meghan Markle.

Speaking of the couple’s decision to step away from royal life, Prince Harry is claimed to have said:

The Duke and Duchess of Sussex are set to officially step down as working royals on 31 March following their decision to quit, move abroad and become financially independent.

The two pranksters are said to have joked that “Greta” enjoyed  reading about the life of the royal couple, causing Prince Harry to reply:

“I can assure you, marrying a Prince or Princess is not all it’s made out to be!”

When asked by the prankster playing Greta’s Father, Svante, if normal life was worse than royal life, the Duke of Sussex reportedly responded:

“Oh no, I think it’s much better… You forget, I was in the military for ten years so I’m more normal than my family would like to believe. But certainly being in a different position now gives us the ability to say things and do things that we might not have been able to do.”

According to The Sun, Prince Harry then added with a laugh:

“And seeing as everyone under the age of 35 or 36, seems to be carrying out an activist’s role, that gives us the opportunity to try and make more of a difference without being criticised.”

The two radio hosts then purportedly asked Prince Harry how it felt for the couple to be “stripped” of their royal titles by the Queen after the decision to step down.

© AP Photo / Victoria Jones/PA
The figures of Britain's Prince Harry and Meghan, Duchess of Sussex, left, are moved from their original positions next to Queen Elizabeth II, Prince Philip and Prince William and Kate, Duchess of Cambridge, at Madame Tussauds in London, Thursday Jan. 9, 2020.

At this point, the Queen’s grandson is claimed to interject:

“No, no, again you mustn’t believe what you read, no one has stripped us of our titles… Because of a technicality within the family, if we are earning money separately from within the family structure, then we obviously have been asked not to use our titles in order to make money, which we would never do. …But the press managed to jump on that to make it look like we had been stripped.”

When questioned regarding the scandal surrounding his uncle Prince Andrew’s ties with deceased billionaire paedophile Jeffrey Epstein, Prince Harry is suggested to have hesitated to comment on the issue, adding only:

When the pranksters reportedly touched upon the media attention that the royal couple have been struggling with, Prince Harry’s response was said to have been:

“From the moment that I found a wife that was strong enough to be able to stand up for what we believe in together, it has basically scared them so much that they’ve now come out incredibly angry, they’ve come out fighting, and all they will try and do now is try and destroy our reputation and try and, you know, sink us… But what they don’t understand is the battle we are fighting against them is far more than just us.”

Executive Editor of The Sun Dan Wootton commented on the alleged taped conversation between Prince harry and the pranksters, saying:

“The Russian pair might have just done the Duke a favour by releasing this call with 'Greta'… It provides the most fascinating insight into Harry’s mind during Megxit. And the idea that his wife is somehow pulling the strings behind the scenes is blown out of the water.”

There has not been an official statement from Buckingham Palace on the story.