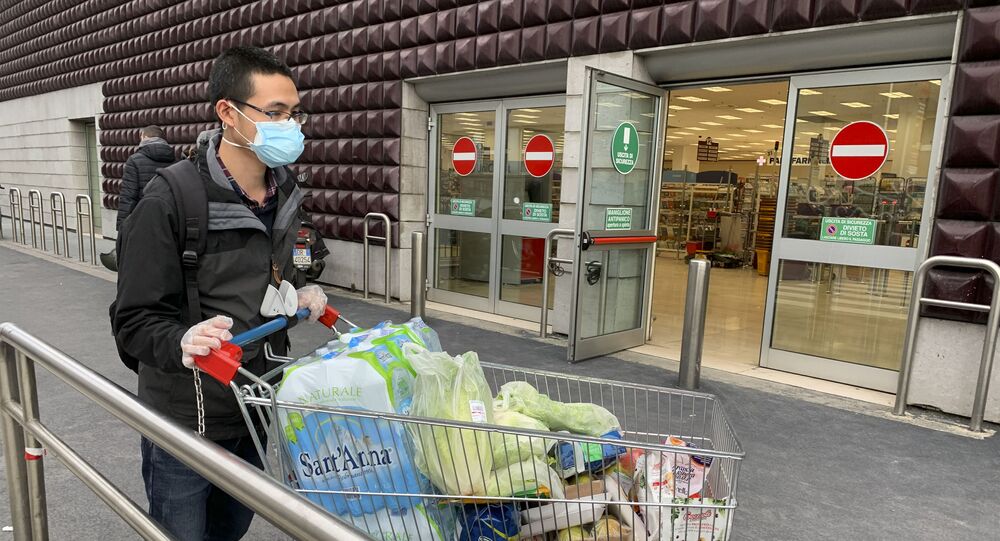 GENOA (Sputnik) - The Italian government's ban on movement across the country, aimed at stemming the spread of the coronavirus disease (COVID-19), will not lead to shortages of food and basic necessities, agricultural association Filiera Italia said in a statement.

"As for the raids on the supermarkets that we have witnessed tonight, we should make it absolutely clear that the new measures do not prevent deliveries of basic necessities. The production of food, medications and all other products continues effectively, as does the free movement and distribution of goods. We should stay calm on this aspect," Luigi Scordamaglia, the delegated councilor of the Filiera Italia association, said in a statement.

Scordamaglia noted, however, that the coronavirus situation had damaged the economy.

"Europe in this emergency is playing its role. Today more than ever these measures must be financed by a common European debt. If the money to avoid the collapse of banks could be found in the past, it means that today funds are to be found at the European level, also by using Eurobonds, which can make it possible to avoid a real economic disaster. If Europe fails to perform the new role that it is required to play now, it will be hard in future to legitimize its existence," Scordamaglia continued.

Despite being the worst-affected country in Europe by the spread of COVID-19, Italy is not the only state where people have ravaged store shelves over concerns that there will be no food or that they will have to spend weeks under quarantine. Austria, Germany, the United Kingdom and other countries have reported similar public reactions.

Late on Monday, Italian Prime Minister Giuseppe Conte issued a decree expanding the quarantine in the northern regions to the whole of Italy. All movement both between regions and inside them are banned unless necessary for work, health or other serious purposes. Moreover, the decree canceled all sporting events and public gatherings and prolonged the closure of schools and universities until April 3. The measures have led to people rushing to supermarkets in order to stockpile food amid fears that supply chains may become disrupted.