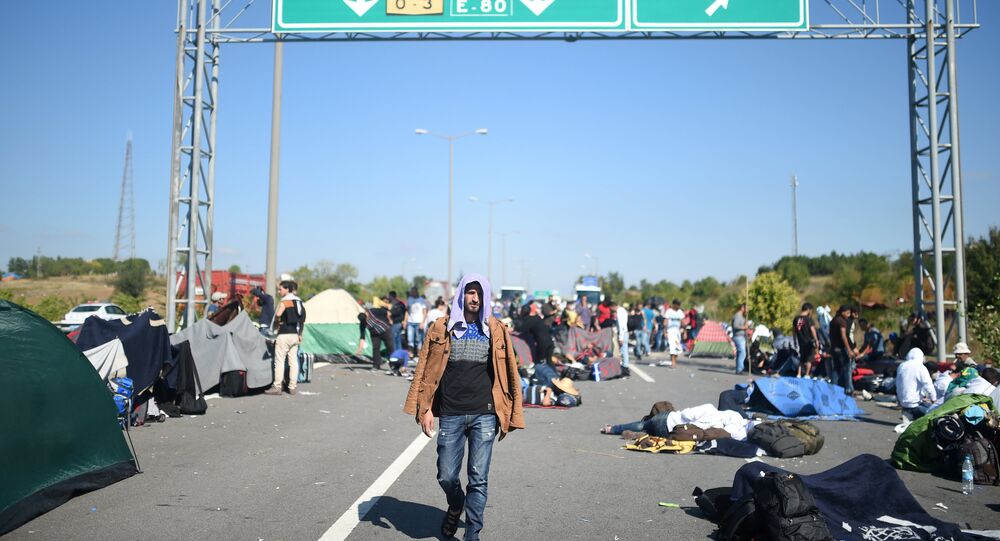 ATHENS (Sputnik) - Migrants who are trying to cross into Greece from Turkey are attacking Greek border guards with the type of tear gas grenades that are used by the Turkish military, Greek government Spokesman Stelios Petsas said Wednesday.

"Migrants who are trying to break into the Greek territory use tear gas, which the Turkish military uses", the spokesman told a press briefing.

Earlier, the Greek authorities published photos of Turkish-made grenades with CS gas that the migrants threw.

According to Petsas, Turkey illegally helps migrants get to the border with Greece in an organised and coordinated operation by the Turkish authorities.

"Meeting of migrants in the centre of Istanbul, in Edirne and other places and free organized transfers to the border, accompanied by the Turkish police, prove this. Migrants say that they receive instructions from the Turkish authorities. Messages that migrants receive on their phones say that the border is open", Petsas said.

The official added that the Turkish side was preparing a fake news campaign with accusations against Greece.

© AFP 2021 / BULENT KILIC
Turkey Pushing 130,000 Refugees From Temporary Camps Towards Greece - Russian Defence Ministry
Last Friday, Turkey announced it would not be able to stem the flow of migrants and refugees following the recent increase in tensions in the Syrian province of Idlib, thus opening its border with the European Union to those wishing to cross it. Soon after, thousands of migrants rushed to Turkey's border with Greece and Bulgaria trying to get into Europe.

However, under the 2016 agreement between Turkey and the EU, Ankara promised to restrain the flow of migrants into the bloc, with Brussels pledging to provide funds to help Turkey care for the refugees