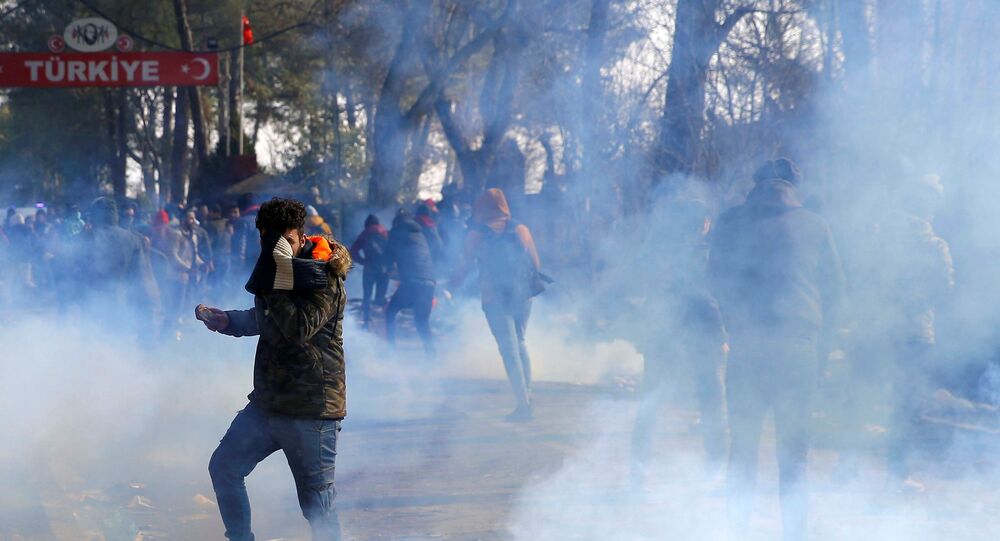 According to the Turkish Interior Ministry, over 100,000 Syrian refugees have already crossed the border between Turkey and the European Union, with Ankara warning that these numbers could soon balloon to “millions.”

A disturbing video allegedly filmed at the border between Greece and Turkey shows a man appearing to deliberately hold a young girl over a smoky log to get her to cry, while a woman nearby imitates crying. Another man then approaches, grabs the child, and runs off. The video's authenticity cannot be immediately confirmed.

Human traffickers are smuggling these kids into Europe while jihadists & the fake news uses them as props to pimp & exploit emotions from public pic.twitter.com/j2ViqzM9Dg

The video, which has nearly 280,000 views at the moment, was apparently shot at the turbulence-hit land border between Turkey and Greece. It first emerged online on March 2 and has been retweeted dozens of times.

Viewers were outraged by what they saw. “They should be ashamed,” one wrote, suggesting that the move was a deliberate ploy to get the sympathy of international media. “This is sickening!” another chimed in, calling the woman’s actions “like a Golden Globe performance.” “Here is the backstage of the invasion of #Greece!” another user claimed. “How low they have fallen to abuse babies to garner sympathy,” another wrote.

The video is one of several clips seeming to challenge the narrative of a Greek crackdown against refugees, with another showing refugees posing for cameramen in evocative poses, and others featuring Greek riot police fending off Molotov cocktails being lobbed by migrants.

#Refugees are trying to enter Greece with Molotov cocktails, Reportedly given to them by Turkey. pic.twitter.com/KIFes7mo3c

Look at the camera men pic.twitter.com/6VugxCbbej

Turkey opened its borders to Europe for refugees late last week, citing an inability to take in any more itself amid the ongoing fighting in Idlib, Syria. Athens responded by beefing up its land and maritime borders with Turkey, using tear gas and stun grenades to try to stop migrants from illegally entering the country at the Edirne-Kastanies border crossing.

On Monday, Turkish President Recep Tayyip Erdogan warned that “hundreds of thousands” of refugees were already attempting to make their way into Europe, adding that this number would “soon be in the millions,” with “the West” to be made to “share the burden of responsibility for refugees.”