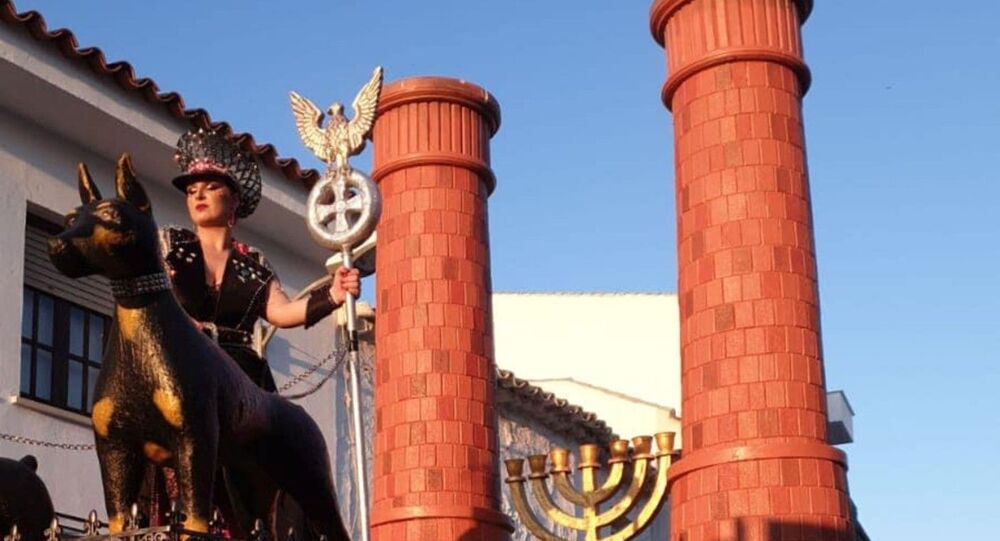 The annual carnival procession in Spain’s Campo de Criptana is receiving backlash from the Jewish community after video and photos of the parade showed participants marching down the streets with crematoria chimneys while donning Nazi attire and skimpy concentration camp uniforms.

Heavy references to the Holocaust were featured in Campo de Criptana’s carnival on Monday, as men and women dressed as gun-slinging Nazi soldiers and concentration camp prisoners bearing Israeli flags marched through the streets of the village in central Spain.

The Holocaust-themed display, which included female concentration camp prisoners in revealing outfits, did not go over well with members of the Jewish community and immediately drew ire from the Israeli embassy in Madrid.

“We condemn the vile and disgusting representation banalizing the Holocaust at the Carnival of Campo de Criptana, making fun of the six million Jews killed by the Nazis,” the embassy said in a Tuesday tweet, adding that “European countries must actively combat” anti-Semitism.

The display was apparently supposed to be a commemoration of the “6 million Jewish men, women and children who perished in the Holocaust and all those who suffered persecution and extermination because of their race, sexual orientation, religion, ethnic origin or political ideas,” according to the Guardian.

However, in a Tuesday social media post, the Auschwitz Memorial blasted the Holocaust depiction. “Hard to describe: memory upside-down, far beyond vulgar kitsch, without any relevance, without reflection & respect,” the museum said, quoting a video of the procession.

The town council has since apologized for the display and, in a statement to the Guardian, said they “share the criticisms that have been expressed” and argued that “if the aim was to commemorate the victims, it’s obvious the attempt fell short.”

Citing local radio station Cadena SER, the outlet reported that Mayor Santiago Lázaro appeared to echo the town council’s sentiments and said that this particular part of the procession did not “feel like a very carnival-type theme,” adding that that he doesn’t think it will happen again.

This came on the heels of Belgium’s Aalst carnival on Sunday, which also drew attention for what many called an anti-Semitic display.

WATCH: This is how antisemitism looks like. The Belgian city of #Aalst has made it clear that antisemitism is alive and well in the 21st century. This is not free speech. This is #antisemitism. pic.twitter.com/kVOBqX8MrW

Despite UNESCO no longer recognizing the event as a “Masterpiece of the Oral and Intangible Heritage of Humanity” due to its past offenses, the parade went forward for the 92nd time.