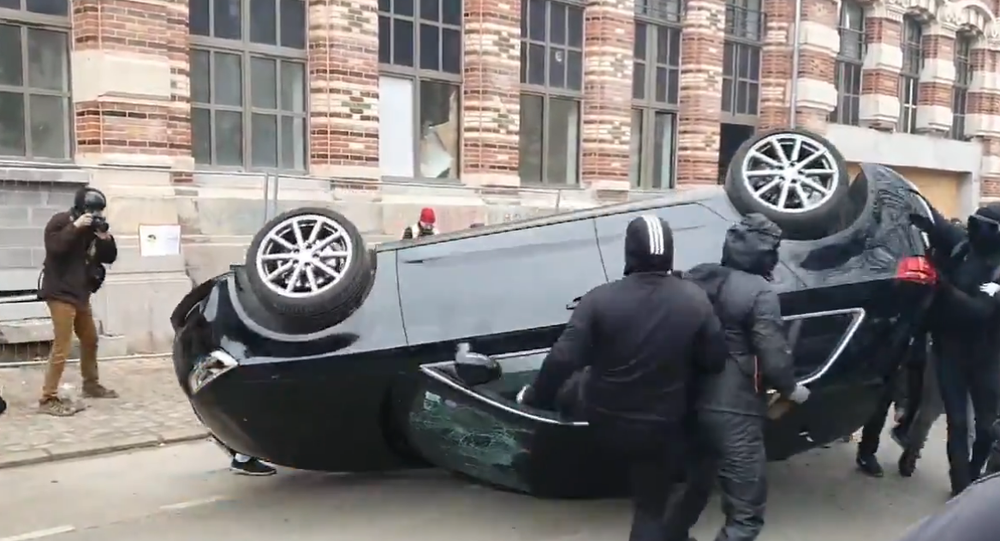 On Saturday, French President Emmanuel Macron agreed to receive a delegation of Yellow Vests at the Elysee Palace, stressing that he is “up for dialogue”.

A video of anti-Macron protesters overturning an Audi car in Lille was posted by Paris-based journalist Jonathan Moadab on his Twitter page, coinciding with the 67th Saturday in a row of the Yellow Vest demonstrations across France.

In the footage, a group of young people all dressed in black is seen starting to trash the Audi after they flip it on to its roof before throwing projectiles toward officers.

Some media reports earlier claimed that the majority of the protesters have ditched wearing their signature fluorescent garments to prevent being targeted by police even though they continue to protest.

The Saturday violence came as French President Emmanuel Macron attended an agricultural show in Paris, where he was briefed on the riots by a representative of the Yellow Vests movement.

“It is because there are people who have become extraordinarily aggressive”, Macron said, urging the protesters to “stop going out to demonstrate like that”.

But in a subsequent surprise move, the French President signalled a readiness to sit down with a delegation of Yellow Vests protesters at the Elysee Palace.

“You create a group for me and I'll receive you without problem, I am up for dialogue. We'll take an hour and we'll talk”, Macron said.

France has been swept by what has become known as the yellow vest protests since 17 November, 2018. Their symbol became the highly-visible safety jackets that French drivers are required to have in their cars

Initially, the movement was triggered by the government’s plan to raise fuel taxes, which many French saw as a serious blow to their purchasing power. Current demands range from Macron’s ouster, the fifth Republic coming to an end and France’s withdrawal from the EU, also known as Frexit.

Over the past few months, the weekly protests have seen a loss of public support as they are gradually being replaced by another vast wave of rallies against a planned government pension reform.