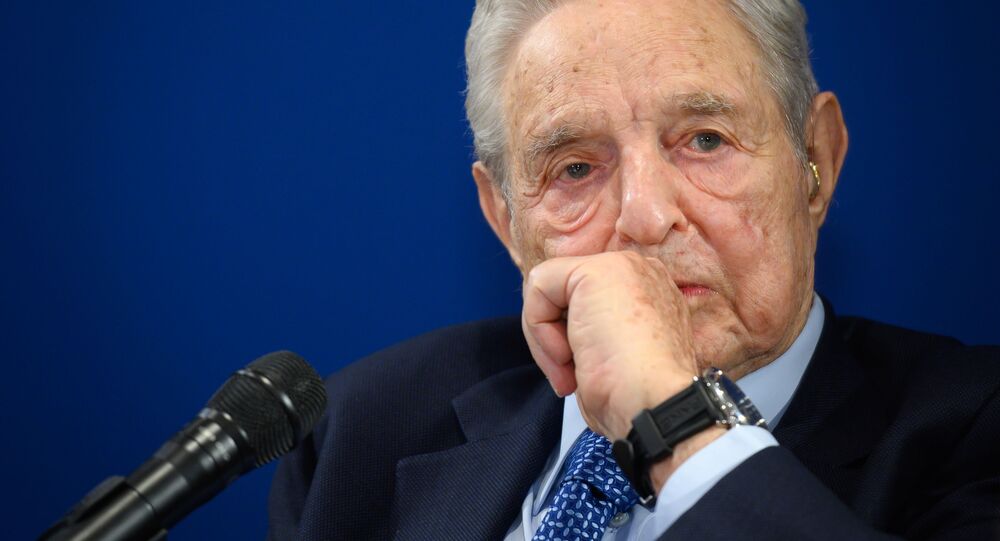 A new report by a French lawyer claims that one in five judges that have sat on the European Court of Human Rights (ECHR) in the last decade had ties to a network of social justice organisations led by George Soros.

Marine Le Pen, the leader of France’s right-wing National Rally party, has called on Emmanuel Macron to stop abiding by the decisions of the European Court of Human Rights (ECHR).

“Faced with these extremely serious revelations, [Emmanuel Macron] can no longer remain silent,” Le Pen tweeted on Wednesday, calling on France’s Court of Cassation and Council of State (a body advising the government on legal matters) to stop heeding the ECHR’s decisions.

“A free state must act against these anti-democratic manipulations!” she added.

Her comment came in response to a report by French lawyer Grégor Puppinck, who sits on the committee of experts on the reform of the ECHR and leads the European Centre for Law and Justice (click here to view).

It claims that at least 22 of the 100 judges that had served on the ECHR between January 2009 and October 2019 had “strong links” to one of seven NGOs linked with George Soros prior to their appointment to the court, with roles varying from “official responsibilities” to “meaningful” participation in the activities of those organisations.

Moreover, 18 of the 22 judges are said to have heard cases involving the NGO with which they had been involved – something that could amount to a conflict of interest.

According to Puppinck, those NGOs are the AIRE Centre (Advice on Individual Rights in Europe), Amnesty International, the International Commission of Jurists, the Helsinki Committees for Human Rights, Human Rights Watch, Interights (International Centre for the Judicial Protection of Human Rights), and “various branches” of the Open Society Foundations itself.

He said he had obtained most information about those links from the CVs of future judges published online by the Parliamentary Assembly of the Council of Europe (PACE).

The PACE elects judges to the ECHR from lists of three candidates proposed by each member state to the European Convention on Human Rights. Those judges hear cases as individuals and do not represent their state, which means that the candidates for the position typically come from NGOs and international bodies because they are more likely to be impartial.

However, the report points out, that practice is “compounded by the importance of the presence and influence of certain NGOs in ‘small’ countries” like Albania, where the Open Society Foundations has spent $131 million since 1992 and where it secured two of the three candidates for an ECHR position in 2018.

NGOs are also allowed to intervene in ECHR hearings as a third party, but Puppinck wrote that there is a lack of transparency around the extent of their real involvement with the court as well.

What was the reaction in France?

The report has been picked up by French conservative magazine Valeurs Actuelles, which claimed the 22 judges in question had allowed George Soros to effectively “infiltrate” the court and influence its decisions.

The magazine cited rulings in favour of same-sex second-parent adoption in Austria and Greece; French male-to-female transgender persons who protested against the sterilising surgery required to have their new gender recognised; Russian activists from Pussy Riot who had a ‘punk prayer’ at a Russian Orthodox church; the review of whole life sentences in Hungary, and the application of Sharia law in Greece to solve inheritance disputes between Muslims.

Jerome Riviere, a National Rally member and leader of the French faction in the Eurosceptic bloc Identity and Democracy in the European Parliament, told Valeurs Actuelles that he was “not surprised” with the report because George Soros “aims to destroy nations and, more broadly, all the structures which are the foundation of our civilisation: the family, the homeland, authority, love of one's history”.

“The mere fact that a European Court of Justice can condemn nations is an anti-democratic scandal,” he said. “Unelected judges arrogate to themselves the power to assess and interpret, without constraint, a text that leads to the creation of law, when their role is merely to say what the law is.”

Nicolas Bay, National Rally Secretary General and vice chair of Identity and Democracy, has said that France needs to “get out” of the court.

“Guided by George Soros and his agenda to impose an ‘open society’, the ECHR has become the embodiment of the government of judges against the will of the people,” he noted. “In the light of these damning revelations, it is more than ever necessary to get out of it.”

Philippe de Villiers, a former French MEP from the Eurosceptic Movement for France, said that Soros’s “ability to penetrate European bodies is due to the fact that it is globalisedd private interests that govern Europe.”

“The Open Society Foundations is therefore more powerful than a country like France. George Soros is much more powerful than Emmanuel Macron,” he stated. “Moreover, the nickname given to him in Brussels speaks for itself: ‘the puppet master’.”

The ECHR and the Open Society Foundations have yet to comment.