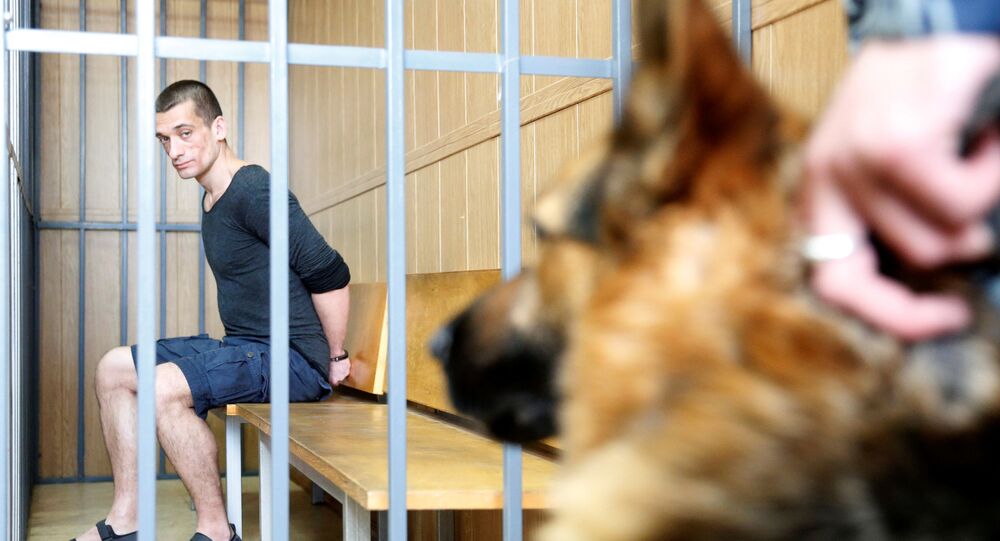 Russian contemporary political artist Petr Pavlensky is currently facing two charges in France over violence with weapons and transmission of sexual videos depicting French politician Benjamin Griveaux. The artist, who has just been released from court, declared that the latter act was a part of his “political-porn project”.

Petr Pavlensky, a Paris-based Russian artist who is known for his contentious political performance art, has commented on charges a French court had earlier brought against him, by rejecting the allegations that his work was somehow related to the Russian government.

“This is the easiest way to explain everything. When something gets in the way or someone doesn’t like something, they start insulting. This can be considered as an attempt to insult [me]”, the artist went on. “Now they’ve decided to explain everything by the fact that I am an FSB agent. That’s okay”.

Pavlensky, who was released from custody on Tuesday evening, thanked his supporters in Russia and used the chance to mention his love of his girlfriend and alleged accomplice Alexandra de Taddeo.

“I need that support”, the artist added.

The artist revealed his actions were related to his new “political-porn project” featuring officials and representatives of power aimed at “opening people’s eyes”. After his website was blocked, the artist signaled his disappointment with the state of freedom of expression in France, saying it no longer exists.

The police opened two probes against Pavlensky on Tuesday. Regarding the sexual video charge, he could face up to two years in a French prison or a hefty fine for publishing intimate materials without the owner’s consent. His first trial is expected to commence on 3 March.

Pavlensky was earlier sentenced by a French court to three years in prison for setting fire to the Banque de France in Paris in 2017 as part of an artistic performance. He was released from custody in September 2018 after spending 11 months in a French prison.

Petr Pavlensky was born in Saint Petersburg and achieved notoriety for his often shocking and politically-themed performances. His first public action included stitching his mouth shut to express solidarity with the Russian feminist punk band Pussy Riot in his hometown back in 2012. An ambulance was reportedly called to the scene by police at the time to send him to a psychiatrist but a doctor declared him sane.

Pavlensky’s most well-known performance and which made international headlines in 2013 featured the artist nailing his own scrotum to the cobblestones in Moscow’s Red Square to express his opposition to the Russian government. Apart from this controversial act, some of Pavlensky’s mass performances even turned rather violent and caused detentions by the police, including one featuring the lighting a pyre of car tyres in St. Petersburg.

He was arrested in 2015 for setting the door of the state security agency building on fire in Moscow, and then charged with “destruction or damage to cultural property or cultural values”, and fined  approximately one million roubles ($15,730) but left the country without paying the debt. At the time, the artist’s political activity was highly praised in the Western media, with The New Yorker proclaiming him an activist protesting against "Putin's political crackdown”.

© Sputnik / Alexey Kudenko
Pavlensky to Receive Asylum in Another EU Country if Stripped of Refuge in France - Lawyer
Pavlensky was granted political asylum in France in 2017. According to the artist, the decision to leave Russia was motivated by his desire to escape sexual assault charges brought against him and his then- girlfriend Oksana Shalygina by a Russian actress. Pavlensky denied the charges, calling them politically motivated, and left the country with his girlfriend and their two kids.
...
Reddit
Google+
Blogger
Pinterest
StumbleUpon
Telegram
WhatsApp
55
Tags:
Benjamin Griveaux, Emmanuel Macron, Russia, Pyotr Pavlensky, France
Community standardsDiscussion