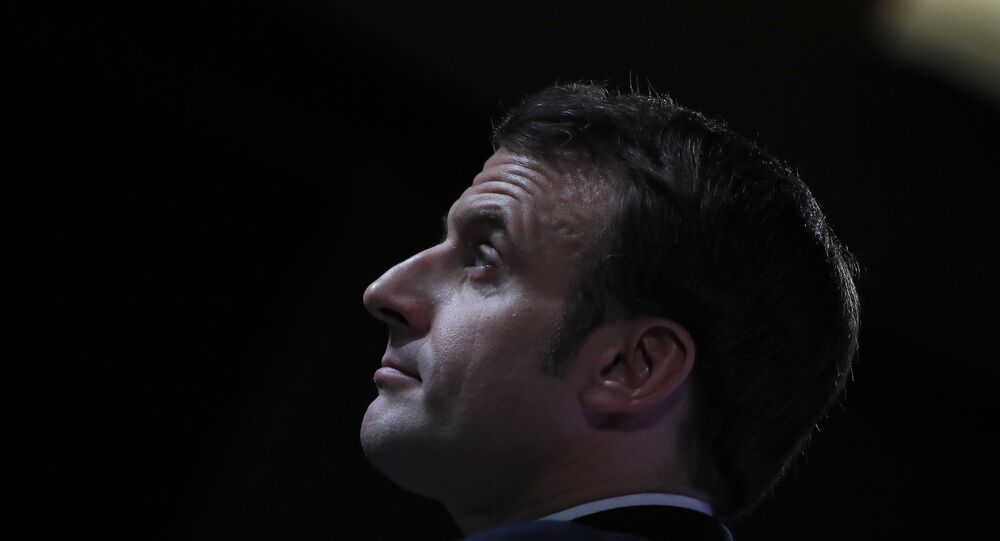 First 1,000 Days of Emmanuel Macron in Office: A Bare-Bones Summary

Emmanuel Macron became the youngest president in France’s history on 7 May 2017. An aspiring reformist, he got elected on a message of optimism – but almost three years later, French people don’t seem to be as optimistic about him as they used to be.

Saturday marks a big milestone for Emmanuel Macron – one thousand days into the presidency, or already more than half way through his five-year term.

In 2017, he beat Eurosceptics Marine Le Pen from the right and Jean-Luc Melenchon from the left on a platform of a stronger Eurozone, increased public investments, labour reforms, globalisation, free trade, and fight against unemployment.

Saturday also marks an umpteenth demonstration of Gilets Jaunes (Yellow Vests), who have paled into insignificance, though, in comparison with recent strikes by labour unions and workers.

Despite initial widespread optimism about his presidency, Macron’s ratings continue to sink, leaving a realistic chance of him going down in history as a one-term president if no radical changes occur before the 2022 election.

So what has Macron achieved in his first 1,000 days in office? Here’s a brief summary.

As a former investment banker at Rothschild and France’s economy minister, the economy was widely seen as Macron’s strongest point at the time of the election.

Macron has launched a €57-billion investment plan to modernise the economy and slashed taxes for the wealthy on everything except real estate. One of the key measures was a flat tax of 30 percent on capital gains (it previously depended on personal income).

Although tax relief benefited the economy in general, the top 5 percent were the biggest winners while purchasing power fell for the bottom 5 percent, meaning that the disparity between the richest and the poorest has grown. Macron's economic policy has led some analysts and media call him the “president of the rich”.

As part of the effort to fight unemployment, he made it harder for jobless people to claim benefits and easier for employers to fire and hire workers.

Unemployment in 2019 fell to 8.5 percent – still above the EU average but France's lowest since 2009. Macron’s government claimed credit for this achievement, although it’s noteworthy that unemployment rates have been falling since 2015, before he took office. He has two more years to fulfil his campaign promise of 7-percent rate by the next election.

He has also promised to plough billions of euros into homegrown digital start-ups and has sought to turn France into a magnet for tech talents with the introduction of a special tech visa.

Macron’s measures contributed to a rise in business investment; however, the French economy grew by 2.3 percent in 2017, 1.7 percent in 2018, and only 1.3 in 2019. It is expected to stagnate further this year, with GDP inching up by 1.3 or 1.4 percent — which is still better than the outlook for the Eurozone’s largest powerhouse, Germany, and is above the EU average.

While staff at the Economic Ministry might be scratching their heads over the charts, foreign policy is where the Macron government has had least confusion. With Britain turning introspective, Angela Merkel’s tenure drawing to a close and Italy’s Matteo Salvini by no means a huge fan of the EU project, Brussels has found itself with a leadership vacuum and Macron has rushed to fill it.

He has openly opposed the rising anti-immigrant and nationalist sentiment in Europe, clashed with Italy over refugees, blocked the accession of two aspiring EU member states – contradicting most of the union – and proposed the creation of a stronger European military outside of the scope of NATO, the key security alliance he said was “brain dead”.

One might even say that Macron bears some similarity to Charles de Gaulle – the strongman he is inspired by – as he rails against what he sees as the pervasive influence of the United States on Europe.

Macron has stood up against Trump over the Paris climate agreement and the Iran nuclear deal (remember Iran’s Foreign Minister Javad Zarif in Biarritz?), defied his pressure over Huawei and 5G, and threatened a digital tax on American tech giants (on that, however, he subsequently backed down).

He has also attempted to patch up relations with Russia, which deteriorated significantly under his predecessors. Vladimir Putin was the first foreign leader to visit the Elysee Palace after Macron took office, and the French President has called on the EU repeatedly to reach out and cooperate with Russia.

But along with a strong diplomatic posture, there is another resemblance to de Gaulle. The famed general resigned in 1969 after widespread protests by students and workers eroded his support and he lost a crucial constitutional referendum.

Social unrest, already a trademark of Macron’s presidency, is what could now bring him down. The French first began protesting en masse against a fuel tax increase over 15 months ago, and while Macron backtracked and sought to quell the protests with tax cuts, the Yellow Vests have morphed into a broader movement against social inequality and the President’s perceived elitism.

A separate protest movement began in December against his proposal to unify France’s complex pension system into a single scheme, where all workers would have the same pension rights but some of those in the public sector would be stripped of generous pension benefits. Macron called the new system a fairer one, but public workers were afraid it would force them to work longer for a full pension. The government has signalled its willingness to compromise, but protests continue as unions negotiate pension cuts.

As things stand, Macron has some things to discuss with his PR strategists. His approval rating has been stuck at 30-35 percent for the past year, which is above the lowest point of 26 percent at the peak of Yellow Vest protests but still low enough to give cause for concern over his 2022 prospects. And in a further sign that things are not going entirely his way, Paris, where he won 90 percent of the vote in 2017, remains poised to re-elect its Socialist mayor Anne Hidalgo next month.