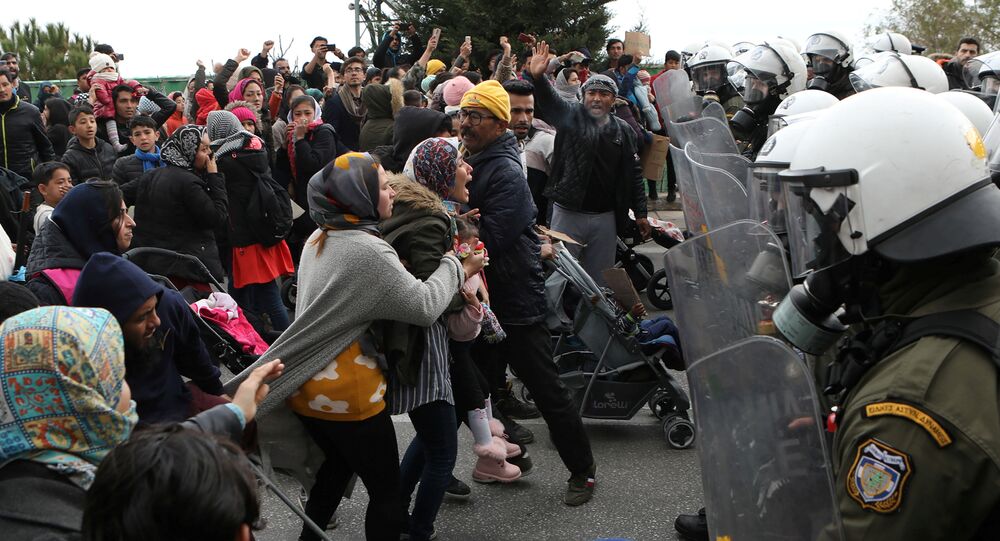 ATHENS (Sputnik) - On Monday, after 2,000 refugees in Moria began marching against poor living conditions and demanded faster processing of their asylum cases, clashes ensued in which police fired tear gas and stun grenades to prevent protesters from reaching the island's capital of Mitilini.

Greek police have detained 40 irregular migrants over their involvement in recent mass riots in the Moria refugee camp on Greece's Lesbos island that quickly turned into clashes with law enforcement, Greek media reported.

According to the Lesvos Post, 40 people were detained as riots continued into the night, which prompted residents of the surrounding town to demand that the refugee camp be closed. The situation remains strained as migrants continue to demand they be transferred to mainland Greece, the newspaper said.

"These sad events prove the need to speed up the asylum procedure, the return of asylum seekers, and the establishment of closed and controlled facilities. It goes without saying that unlawful behaviours are incompatible with the asylum procedures", Minister for Migration and Asylum Notis Mitarakis was quoted as saying.

Migrants reportedly plan to continue the protests in Mitilini, which is further south on the island.

Riots and disturbances in the Moria camp have become commonplace as the facility has long since exhausted its capacity to accept newcomers. Illegal migrants continue to arrive and stock in the Greek islands while the government is still reluctant to relocate them to the mainland, despite promises to do so, and build additional temporary camps to that purpose.