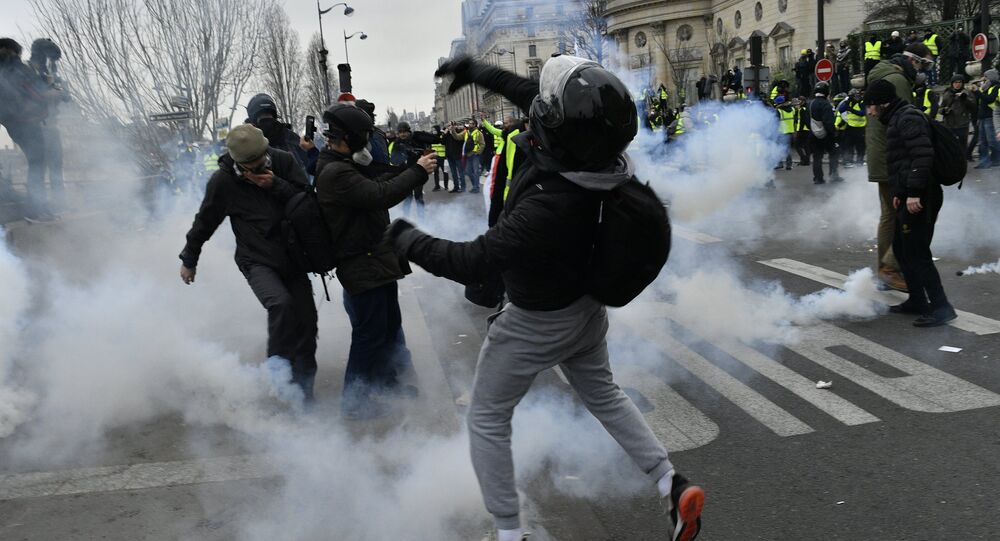 The tear gas grenade was described as a weapon of war in police manuals. Three years ago French authorities banned the use of the OF-F1 stun grenade after a young demonstrator was killed in the city of Toulouse.

French authorities have banned the use of the GLI-F4 grenade after several protesters sustained serious injuries, losing hands and fingers. In an interview with television channel France 3, Interior Minister Christophe Castaner said the tear gas grenade, which is described as a weapon of war in manuals, would no longer be used by law enforcement officials as too many people have been injured. The minister stressed that the ban would take immediate effect.

Protests against Emmanuel Macron’s policies continue across the country. Demonstrators often clash with police officers, who use tears gas in order to disperse protesters. In December 2018, a man had his hand torn off after he picked up a CLI-F4 grenade and tried to throw it away. Another demonstrator lost his fingers attempting to toss the grenade.

France was the only country that used the GLI-F4, which contains an explosive charge of 26 grams of TNT. In 2017, French authorities banned the OF-F1 stun grenade because it was linked to the death of a 21-year-old man. Botanist and environmental campaigner Remi Fraisse was killed during a protest against the construction of a dam in the city of Toulouse.

Members of the Yellow Vests social movement, named after yellow visibility vests all drivers are required to have in their vehicles, have been protesting in major French cities since 2018. Initially, the demonstrators rallied against the rise of fuel prices and high cost of living, but the protests later widened into opposition against President Emmanuel Macron and his government. Demonstrators believe the Macron's proposed policies favour the elite and hurt the working class. The recent rallies in the country are against proposed pension reform.