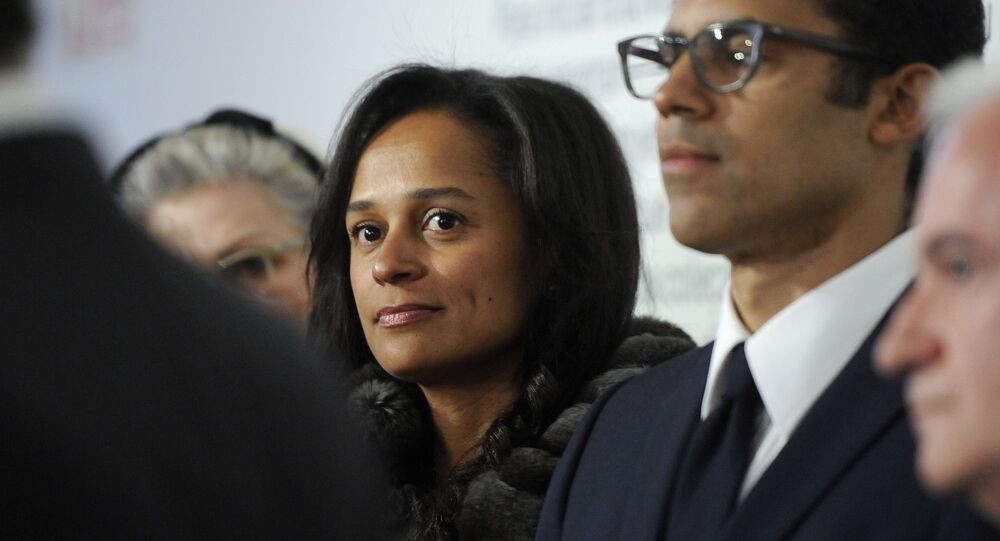 The billionaire daughter of the former President of Angola, Isabel dos Santos, has been charged with money laundering and mismanagement. Her father, José Eduardo dos Santos, ruled the country between 1979 and 2017.

Portuguese police said on Thursday, 23 January, the manager of Angola’s state-owned oil company’s bank account has been found dead at his home in Lisbon.

Police said Nuno Ribeiro da Cunha was found hanging in the garage of his home on Wednesday night. Police said da Cunha, who was director of private banking at Eurobic, a small Portuguese bank, had tried to commit suicide earlier this month.

​Africa’s richest woman, Isabel dos Santos, is wanted by the Angolan government who accuse her of mismanaging the state-owned oil firm Sonangol and lining her own pockets.

Dos Santos, 42, was put in charge of Sonangol when her father was President but he stepped down in 2017 and his successor, João Lourenço, has come under huge pressure to investigate her.

This was her banker. Nuno Ribeiro da Cunha. He's the man who helped her to steal from her people. The corruption report named him as a suspect along with Isabel. I said WAS because he apparently committed suicide. Who honestly believes that he committed suicide? pic.twitter.com/IBossiTiuK

​This week hundreds of documents from dos Santos’s business empire were leaked to The Guardian and other newspapers allegedly revealed she had plundered Angola’s huge oil wealth to build her fortune, which is now estimated at US$2.1 billion.

Angola’s prosecutor general Helder Pitta Gros told a press conference on Wednesday, 22 January: "Isabel dos Santos is accused of mismanagement and embezzlement of funds during her tenure at Sonangol and is thus charged in the first instance with the crimes of money laundering, influence peddling, harmful management ... forgery of documents, among other economic crimes.”

Dos Santos was head of Sonangol for 18 months and her successor Carlos Saturnino began investigating the company’s accounts soon after he took over in 2016. He has reportedly questioned "irregular money transfers".

Angolan businesswoman Isabel dos Santos was constituted accused of alleged mismanagement and embezzlement of funds during her visit to the state oil company Sonangol, the Attorney General's Office announced this Wednesday. pic.twitter.com/fJxoyTDdKr

​Dos Santos, who is married to art dealer Sindika Dokolo, is accused of stealing money from mineral-rich Angola and transferring it abroad with the help of unnamed Western firms.

The details of the so-called Luanda Leaks, which were published earlier this week, have put pressure on Angola and also the former imperial power, Portugal.

It is not known where dos Santos is or whether Angola will ask Interpol to put out an international arrest warrant for her.

Africa's richest woman is Isabel dos Santos, an Angolan businesswoman & daughter of former Angolan President José Eduardo dos Santos. Her mother is Tatiana Kukanova, a Russian who her father met in the Soviet republic of Azerbaijan. Her net worth is over $3 billion. pic.twitter.com/OXL5GyEAZP

​Dos Santos was named Africa's richest woman by Forbes in 2013 and she left Angola after her 77-year-old father stepped down.

She is believed to have homes in London, Portugal and Dubai.

Dos Santos led the MPLA, a socialist rebel movement which fought the colonial Portuguese authorities in the 1970s and then defeated the South African-backed Unita rebels in a long and grim civil war which lasted until Unita leader Jonas Savimbi’s death in 2002.

Critics say dos Santos later fell into the trap of many African rulers, enriching himself and his family at the expense of the people, most of whom remain impoverished despite the country’s huge oil and gas deposits.