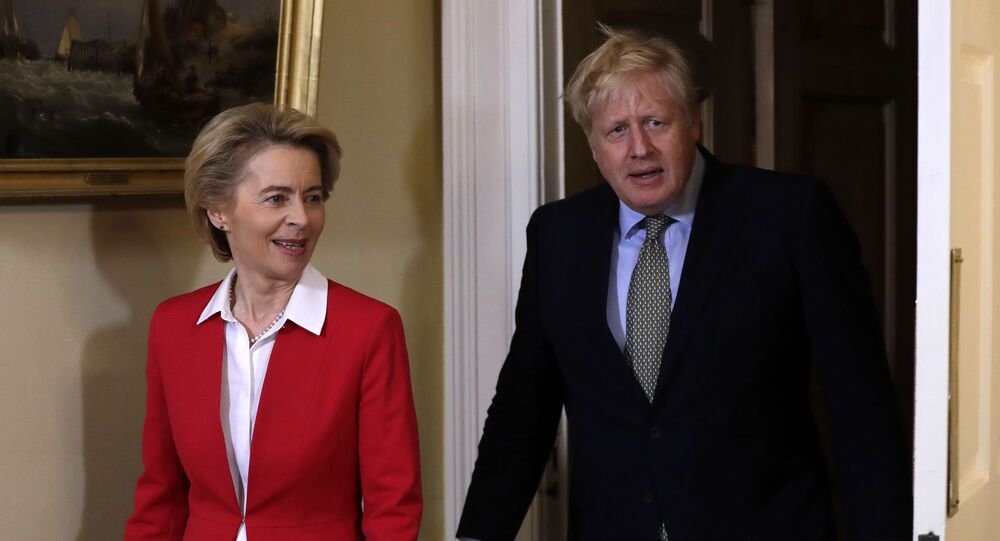 The warning was issued on Thursday from EU chief negotiator Michel Barnier's senior advisor who said that Brussels would "not tolerate any backsliding", in response to statements from No 10 stating that such checks would not be "necessary".

EU officials have warned UK Prime Minister Boris Johnson it could slap the UK with "sanctions" if London fails to check goods in the Irish Sea after leaving the European bloc.

Stefaan De Rynck said at an event in London: “2020 will not just be about the future relationship, but also about implementing the withdrawal agreement – notably the Northern Irish protocol."

Mr Rynck concluded: “That creates quite a lot of preparatory measures and, certainly on our side, we will not tolerate any backsliding or half measures.

He added that the EU would have to be "extremely disciplined" to get the agreement "up and running" in 11 months, adding that British officials would need to "apply the checks the UK has agreed to apply".

The announcement was made days after Mr Barnier tweeted on Tuesday that the EU was preparing a "mandate" on future relations with Britain, adding that numerous issues would "need to be addressed".

The comments echo the sentiments of newly-appointed European Commission president, Ursula Von Der Leyen, who said a week ago that the bloc's "top priority" would be to "implement the Withdrawal Agreement both in spirit and in letter", adding that there would be no "watering down, no backsliding, no half-measures".

The news comes fresh after the British Prime Minister cautioned US president Donald Trump of launching a trade war against the UK, adding that both countries would suffer if Washington did so over London's "tech tax" against American tech giants, including Facebook, Google, Apple and Amazon.

Johnson made the comments after US treasury secretary Steven Mnuchin threatened to retaliate against its Atlantic partners, possibly via tariffs on UK car exports, should the UK impose a 2 percent tax on US tech firms by April.

Mr Mnuchin said at the World Economic Forum in Davos on Tuesday: “If people want to just arbitrarily put taxes on our digital companies we will consider arbitrarily putting taxes on car companies.

UK officials, including Chancellor of the Exchequers Sajid Javid, said that the tax would proceed, with No 10 failing to rule out reciprocal measures, despite potential agreements on an expedited trade deal after Brexit.

A spokesperson for Mr Johnson said: “Imposing additional tariffs would harm businesses and consumers on both sides of the Atlantic.

When asked if the UK sought to impose retaliatory tariffs on the US, the spokesperson said: “Let’s focus on the here and now.

The UK faces numerous challenges as it leaves the European Union on the 31 January, including divergences on policy towards Iran, granting Chinese tech giant Huawei access to build the UK's non-core components in the nation's 5G networks, as well as implementing corporation taxes on US tech giants. But despite such challenges, the UK's Withdrawal Agreement passed in parliament and has been sent to the Queen for royal ascent.

PM Johnson is set to deliver a keynote speech on 31 January, where he is set to "mobilise the full breadth" of the country's freedoms after leaving the EU, according to a memo seen by the Daily Mail, who added that the memo would form the basis of the Prime Minister's Brexit speech at the end of the month.