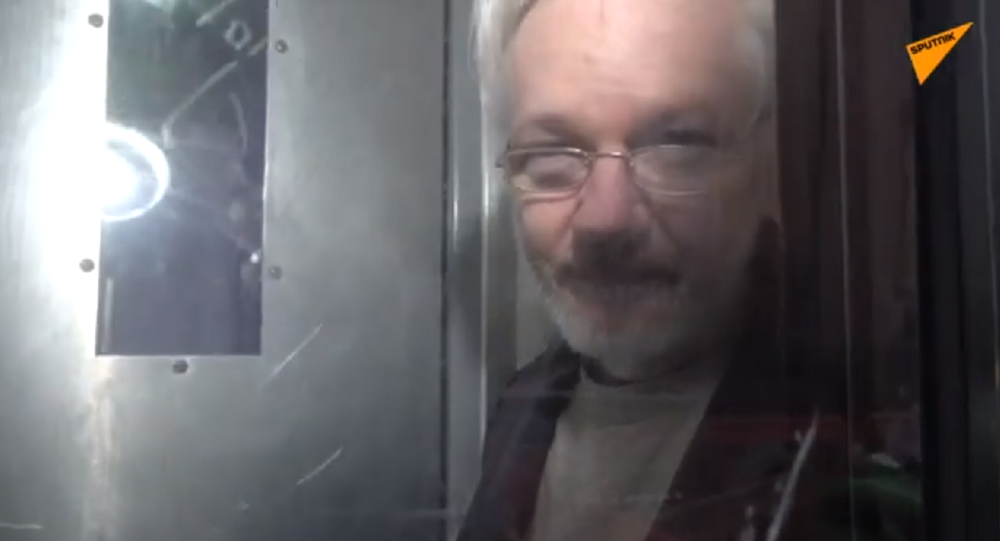 The imprisoned WikiLeaks founder appeared at the Westminster Magistrates’ Court in London on Monday, where a multipart hearing on his possible extradition to the United States was started.

Journalists armed with cameras managed to catch a glimpse of Julian Assange Monday night following his extradition hearing, with the WikiLeaks founder filmed from inside a police van outside the court.

Assange, wearing glasses and sporting a grey beard, was encouraged to “stay strong” and told that people were fighting for him.

“Stay strong Julian, we’re fighting for you. We won’t let them do this to you! Remember that! Stay strong, you will be free!” an unidentified man could be heard shouting.

Encouraged by a second journalist to talk to camera, Assange shook his head and gestured toward his ear, indicating that he couldn’t hear or wasn't in a condition to speak.

The 48-year-old Australian-born activist made a brief appearance at the Westminster Magistrates’ Court on Monday, with his lawyers seeking to prevent his extradition to the United States. At the hearing, Judge Vanessa Baraitser ruled that Assange’s next hearing would take place on January 23. Assange is to take part in that hearing by video linkup.

Assange, accused of sexual harassment and rape in Sweden in 2010, sought shelter in the Ecuadorian Embassy in London between 2012 and early 2019, maintaining that the charges against him were false. In April 2019, UK police were given permission by the Lenin Moreno government to enter the embassy and arrest him, with UK authorities sentencing him to 50 weeks prison time for breaching his original bail conditions. In May 2019, the US Department of Justice indicted Assange under the Espionage Act and demanded his extradition. If extradited and convicted, the WikiLeaks founder could spend the rest of his life in prison.

Swedish authorities dropped their investigation into the rape allegation made against Assange in November, citing a 'weakened evidential situation.'

Assange's friends and fellow journalists have repeatedly expressed concerns over a "rapid decline" in the WikiLeaks founder's health since his imprisonment. Assange's health is believed to have deteriorated steadily since his confinement to the Ecuadorian Embassy in 2012, getting worse after he was jailed.