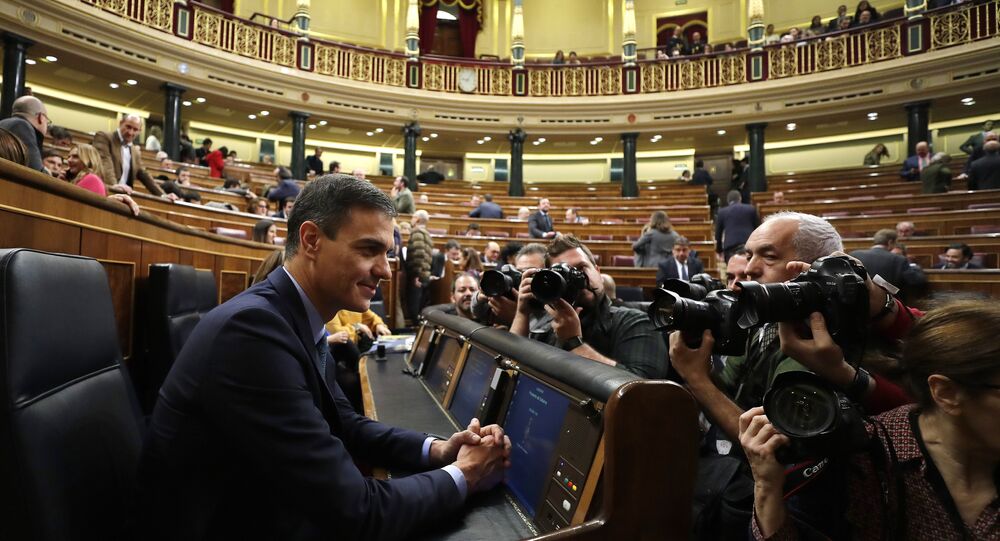 'Spain is Not Going to Break': PM Sanchez Vows to Resolve Catalan Dispute Amid Push to Form Gov't

Spain's interim Prime Minister Pedro Sanchez, seeking to drum up support to form a coalition government amid a deeply fragmented parliament, pitched his priorities on Saturday at the investiture debate, pledging to resolve the Catalan dispute, reports Reuters.

Among his priorities, Sanchez mentioned increases in corporate tax, tighter protection for workers, fighting climate change and gender equality. He pledged to lift the minimum wage to 60 percent of average national wages by the end of the government's four-year term.

​Spain's lower house had scheduled a confirmation session on 4, 5, and 7 January on whether to renew Pedro Sanchez as Prime Minister.

While Sanchez doesn’t have the absolute majority of 176 members among all 350 lawmakers in the Spanish parliament to take office at the first ballot on Sunday, he aims to win a second vote on Tuesday which would only require him to obtain more votes in favour than against.

Earlier this week, the Socialist Party leader Sanchez and Pablo Iglesias, the head of the left-wing party Unidas Podemos, had reaffirmed a decision to forge Spain’s first coalition government since the 1936-1939 Civil War.

Since the two parties together fall short of a majority with 155 seats in a 350-member parliament, Sanchez turned to Catalonia's largest separatist party, Esquerra Republicana de Catalunya, to make up the numbers.

Esquerra voted to support a new Spanish government after the Prime Minister agreed to hold a dialogue over the region's future and submit its conclusions to Catalan voters.

© Sputnik / Jordy Boixareu
Protests in Barcelona over the sentencing of former Catalan leaders.

About 95 per cent of members of the ERC, a social democratic party, backed the move in a ballot, with their MPs to abstain in a confidence vote next week, paving the way for a new term for Sánchez.

As opposition parties expressed anxiety over an “open agenda” on Catalonia’s status, PSOE leaders on 3 December sought to allay concerns.

“We don’t support a referendum on independence…We are willing to discuss any initiative around the table. But, clearly, that is not the same as accepting any initiative,” José Luis Ábalos, Socialist party secretary was quoted as saying by The Telegraph.

The PSOE has been supporting a federal approach to Spanish regional demands, maintaining that the right to self-determination is not included in the Constitution or covered by international law in the case of Catalonia.

Sanchez has been cited as wanting to resume dialogue and address the issues within Spain's constitutional framework.

Spain has been in political gridlock for almost a year, highlighted by Catalonia's on-going striving for independence.
In November, Spain held general elections for the fourth time in four years.

The Socialists won 120 seats in the lower house of the country's 350-seat parliament, as Podemos secured 35 seats.