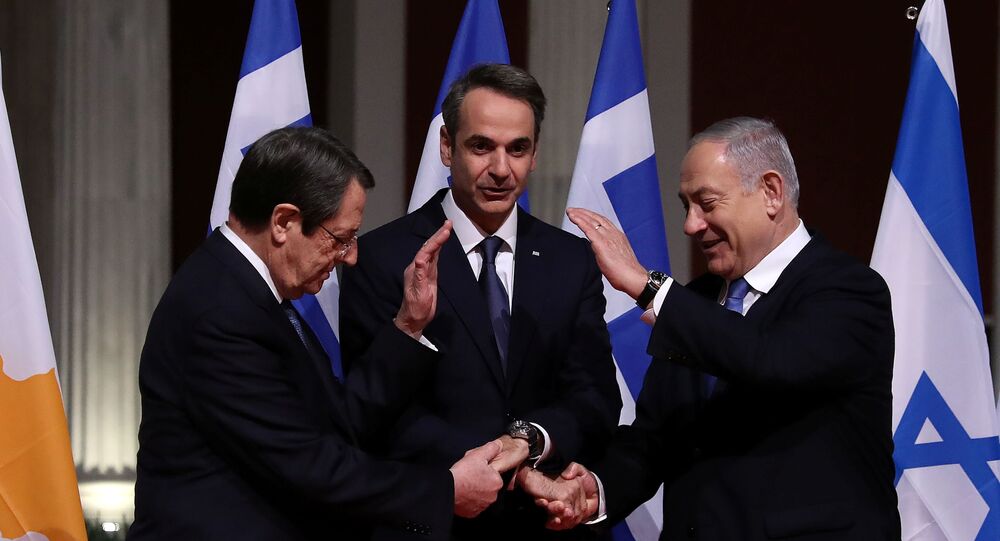 ATHENS (Sputnik) - The EastMed pipeline project, which is expected to bring Israeli and Cypriot natural gas to Greece and Italy, is not aimed against third parties and is open to anyone respecting international law, Greek Prime Minister Kyriakos Mitsotakis said on Thursday.

Earlier in the day, the agreement regarding the pipeline's construction was signed by Greek Energy Minister Kostis Hatzidakis and his Israeli and Cypriot counterparts, Yuval Steinitz and Yiorgos Lakkotrypis, in the presence of Mitsotakis, his Israeli counterpart, Benjamin Netanyahu, and Cypriot President Nicos Anastasiades.

"Today, we signed not just a beneficial agreement. We have sealed our countries' strategic partnership in the region, which requires development and security. I want to reiterate, EastMed is not a threat to anyone. Trilateral cooperation arrangements like the one between Greece, Cyprus, and Israel, are not aimed against anyone. Regional cooperation is always open for all on condition of respect of the international law and rules of neighborliness," Mitsotakis said.

The prime minister noted the support of the United States and said he would personally describe the geopolitical importance of the pipeline to US President Donald Trump during his visit to Washington next week.

"At the same time, the project brings flexibility and independence in terms of energy sources for Europe. That is why the European Union has supported EastMed at all stages as a project of mutual interest," he added.

The pipeline is expected to bring natural gas from Israel’s Leviathan field and Cyprus’ Aphrodite field to Greece and go further to Italy and other southeastern European countries.

According to the current estimations, the pipeline could become operational in 2024-2025.