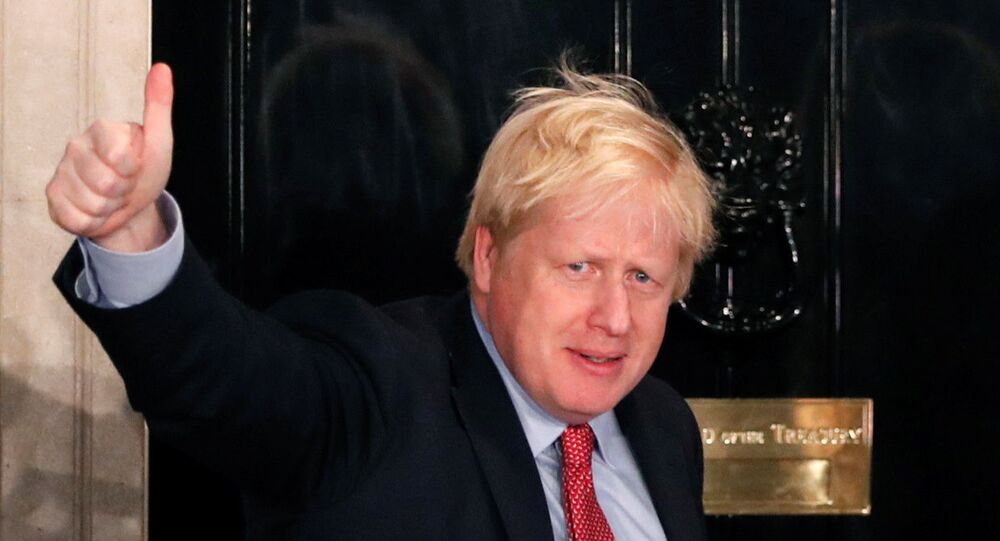 During the 12 December elections, Prime Minister Boris Johnson and the Conservatives made significant gains across the UK, where Tories won 365 out of 650 seats, including traditionally Labour constituencies in the Midlands and northeast England.

The UK Treasury is considering changing government spending rules to shift resources outside of London to economically unstable areas in England’s north and the Midlands, the country’s centre, The Times reports.

The “One Nation Conservatism” spending plan, which was endorsed by Prime Minister Boris Johnson, stipulates that the areas would see a rise in funding for transportation infrastructure projects, business development, and free ports.

The proposals are due to go into effect in the spring budget, which envisages allocating billions of pounds for the areas where the Conservatives won a series of key seats in the general election earlier this month.

© AFP 2021 / OLI SCARFF
Britain's Prime Minister and Conservative leader Boris Johnson (C) reacts as the results are read out for the race to be MP for Uxbridge and Ruislip South at the count centre in Uxbridge, west London, on December 13, 2019 after votes were counted as part of the UK general election.

Whitehall's resources are expected to be focused on improving the well-being of people in the north and the Midlands rather than on overall national economic growth, according to The Times.

The Guardian, in turn, quoted a Treasury spokeswoman as saying that they are working “across government to ensure investment is focused on where it is needed across the UK and delivers value for money for the taxpayer”.

“A traditional cost-benefit analysis merely looks at what constitutes an economic gain without examining the effect of that gain on different groups of people. It means it is far harder to justify an infrastructure project that would link up northern towns and cities than it would be to justify a similar project in the south of the country”, he was cited by UK media as saying.

O’Donnel was echoed by economist and Northern Powerhouse Partnership vice-chair Jim O’Neill, who said that he truly welcomes “a change to this approach, and hope it is for real”.

According to him, “it would be a huge boost for many investments across the country”.

Following the 12 December general election, Conservatives won with a clear majority of 365 seats to Labour’s 203, winning a whopping 66 additional seats, some of which Labour had held for almost a century in England’s north and the Midlands.

On 20 December, 358 MPs voted in favour of Boris Johnson’s EU withdrawal agreement, which included a legal prohibition against the “transition period” extending beyond December 2020. This means that negotiators will only have 11 months to secure an agreement from the scheduled Brexit date of 31 January 2020.

Johnson Deal 'Not a Proper Brexit', But as Good as UK Will Get - Pundit