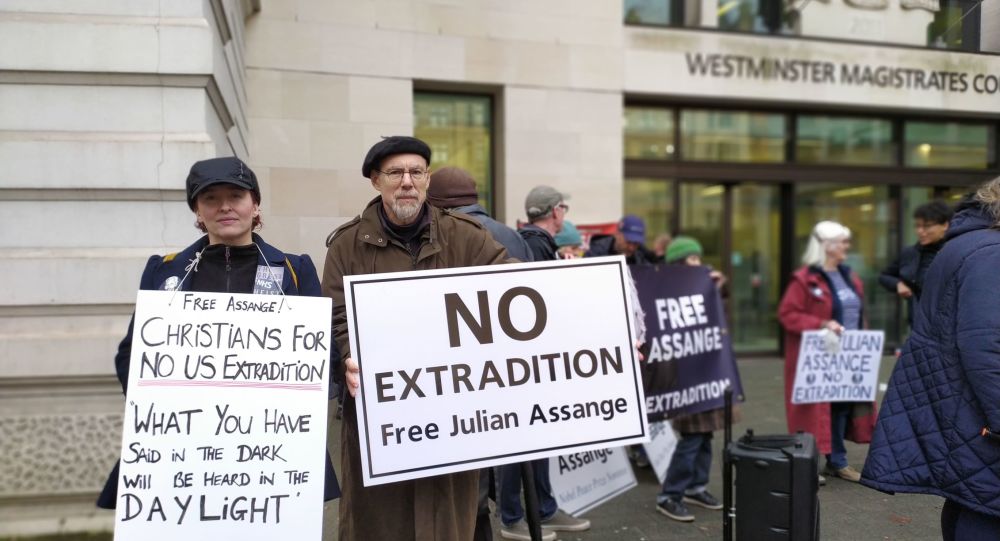 Niki Konstantinidis, a barrister and supporter of Julian Assange, has filed a complaint with the Judicial Appointments and Conduct Ombudsman (“the Ombudsman”) against England’s top magistrate for alleged violations of conflict of interest rules in the case of the WikiLeaks publisher.

This is Konstantinidis's second complaint on this issue, having filed her first one with the Judicial Conduct Investigations Office (JCIO), on 18 November 2019, in which she alleged “serious undisclosed conflicts of interest of Chief Magistrate, Senior District Judge Emma Arbuthnot”. But after that complaint ‘vanished’ she lodged a further one with the Ombudsman on 27 December 2019.

​Konstantinidis, who is qualified in Australia as a barrister and in northern Ireland as a solicitor, said she sought “to expose the dilapidated UK judicial system with its alleged safeguards”.

“[The complaint] is a way of raising the political consciousness amongst the public” Konstantinidis said “so that they understand the real context of the situation--i.e., that there is no hope of getting a fair hearing when big political interests are at stake”.

Konstantinidis explained to Sputnik that after the JACO initially registered her 18 November complaint, it disappeared.  “I got an email [dated 6 December] as to the change of status and abracadabrante …complaint gone”, she said.

“I knew that my [original] complaint to the ICJO would hit a dead end”, she said, “but I didn’t think they would do it this way”.

On 14 November investigative journalist Mark Curtis and Matt Kennard revealed that senior district judge Lady Emma Arbuthnot, who has made multiple key rulings effecting Assange, had a series of undisclosed conflicts of interest. Both Arbuthnot and her husband Lord James Arbuthnot, received gifts from infrastructure firm Bechtel and the Turkish state, both of which were the subject of unflattering revelations by WikiLeaks.

Bechtel was revealed to have pressured Egypt's Ministry of Energy to award it a tender for "technical consultancy and design of Egypt’s first nuclear plant". The "Berat Box" leaks, which included emails belonging to Turkey's Minister of Energy, Berat Albayrak, showed that the Bosphorus Centre for Global Affairs, which paid for a trip to Turkey for Lord Arbuthnot and a former chair of the joint committee on intelligence Baroness Neville-Jones, "acted as a government front to suppress reporting critical of the government".

At time Assange’s judge was preparing her case in Jan 2018, her husband was in Turkey meeting govt officials exposed by Wikileaks. Why has Lady Arbuthnot failed (as far as we know) to declare potential conflicts of interest as UK legal guidance requires? https://t.co/EYaCZ12SXU

​Curtis and Kennard also detailed Lord Arbuthnot's longstanding and extensive ties with the British national security state, including with top officers of MI5 and MI6, institutions which are known to be hostile to the transparency publisher.

Curtis and Kennard also revealed that Arbuthnot’s son, Alexander Arbuthnot, is linked to Darktrace "an anti-data leak company" created in the wake of WikiLeaks's Iraq War Logs revelations by the "UK intelligence establishment".

Konstantinidis is a commercial lawyer by trade but has gained extensive knowledge of human rights law through her many years of activism.

She says she proceeded to “the next level” (ie the Ombudsman) expecting “more administrative hell and more ‘legal’ window-dressing”. While she doesn’t believe the Ombudsman will investigate her complaint properly, she does think what she called “the Arbuthnot travesty” will be “on display for all to see”.

“It's important for the masses to be aware of the legal lawlessness of the UK right now”, she concluded.

Assange faces 175 years in prison in the US where he is wanted for his role in publishing classified US materials which revealed war crimes and crimes against humanity perpetrated by US and UK troops in Iraq. A punishment which the ex-Australian prime minister Kevin Rudd blasted as “unacceptable” and “disproportionate”.