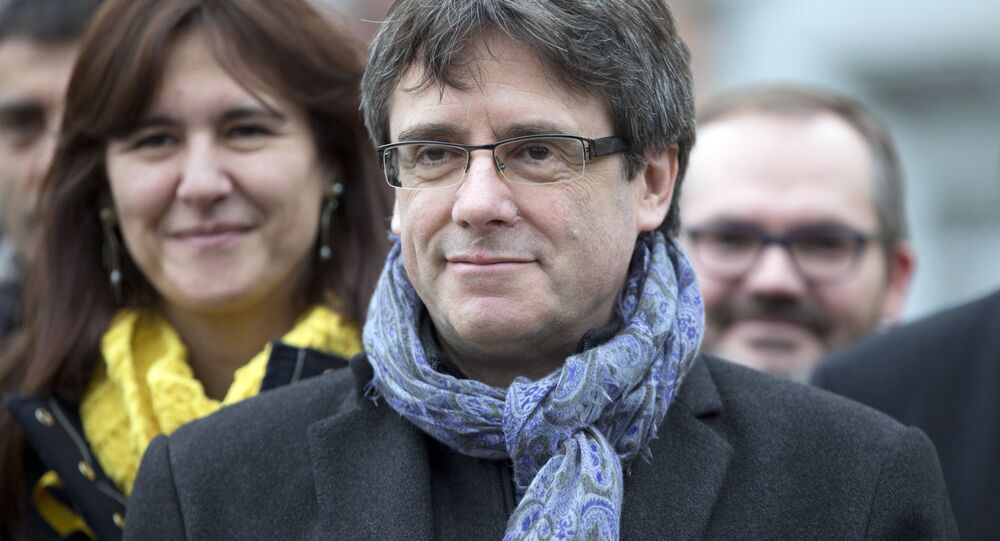 MADRID (Sputnik) - Carles Puigdemont, the former president of the Catalan government who is being sought by Madrid on sedition charges, has asked Spain’s Supreme Court to drop all search and arrest warrants issued for him over his role in the 2017 regional independence referendum, which was not authorised by central authorities.

In a 63-page letter, submitted on his behalf by his lawyer, Gonzalo Boye, Puigdemont invoked his immunity as a member of the European Parliament and asked Judge Pablo Llarena to give up the case.

Puigdemont was elected to the EU legislature in May alongside former Catalan health chief Toni Comin and the region's ex-vice president Oriol Junqueras. However, the politicians have been unable to carry out their mandates since Spain's electoral authorities have not recognized them as members of the European Parliament.

© Sputnik / Ilya Pitalev
Spanish TV Station Rules out ‘External Computer Sabotage’, as RT Interview With Puigdemont Aired
Madrid demanded that Puigdemont and Comin, who have fled to Belgium in the wake of the referendum, take the oath of office in Spain, where they face arrest. Junqueras, in turn, was already in Spanish custody over his role in the referendum when the election results emerged and was unable to engage in the parliament's work.

Thursday was the last day for the defence and prosecution to argue their cases in front of the top EU court over whether Junqueras should be given immunity to take up his seat in the Strasbourg-based legislature.