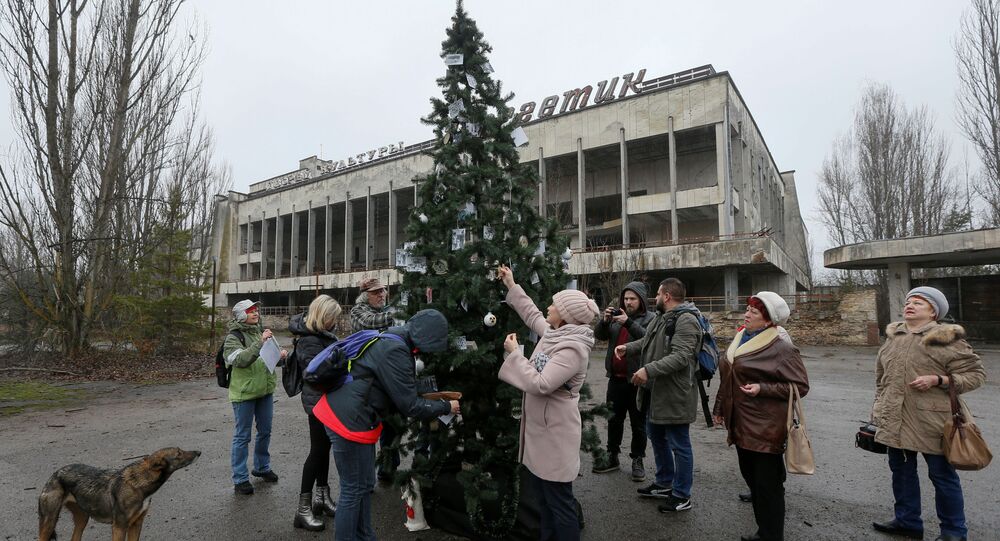 The explosion at the Chernobyl Nuclear Power Plant in 1986 led to the release of a large amount of nuclear fuel into the atmosphere, which left the surrounding area potentially hazardous and closed for settlement for a long time to come.

A Christmas tree was installed in Ukraine’s city of Pripyat for the first time since the accident at the Chernobyl nuclear power plant almost 33 years ago, national news portal ZIK reported. Pripyat is located within 30 km of the Chernobyl Exclusion Zone that was established around the plant following the nuclear disaster. The zone is still restricted to free public access, but short tours for tourists to certain areas are now permitted by authorities and are becoming more widespread.

© REUTERS / VALENTYN OGIRENKO
Former residents of Pripyat located near the Chernobyl Nuclear Power Plant decorate a Christmas tree, which was installed in the main square of the ghost town for the first time since 1985, in Pripyat, Ukraine December 25, 2019

The tree was installed near Pripyat’s “Energetik” Cultural Palace, according to the outlet. The city’s former residents arrived in the abandoned city to attend the event and decorate the tree with toys and childhood photos.

© Photo : M Restaurants
Fancy a Drink? Twitter Debates Chernobyl Atomik Vodka Produced in Nuclear Exclusion Zone
The accident at the Chernobyl Nuclear Power Plant occurred on 26 April 1986 during an experiment focusing on maintaining reactor cooling in the event of a power outage. A number of coincidences led to an eventual explosion of the reactor and a large amount of nuclear fuel being released into the atmosphere, contaminating nearby cities and large areas of contemporary Ukraine, Belarus and Russia.

The restricted 30-km exclusion zone that was established around the plant due to its extremely high levels of radioactive contamination from nuclear fallout still remains uninhabited and closed to free public access. Interest in the zone where Pripyat is located has recently been boosted by HBO’s Chernobyl mini-series.