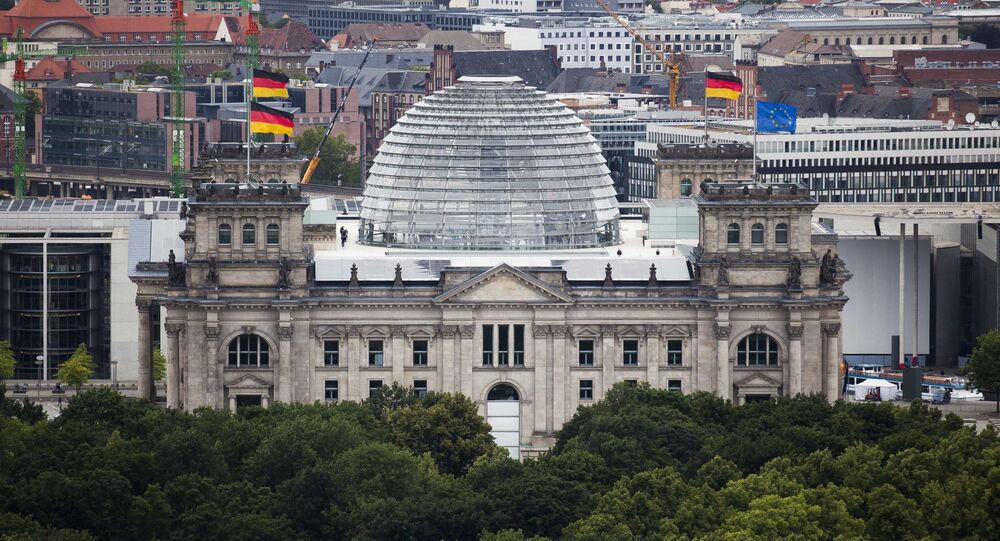 German lawmakers approved a non-binding initiative on Thursday calling on the government to ban from Germany the political and militant group Hezbollah, which forms part of the Lebanese government. The move, reportedly aimed at combating anti-Semitism, has been rejected multiple times by the parliament.

The Thursday resolution was approved by the opposition Free Democrats as well as the Social Democratic Party, which is allied to the Christian Democratic Union (CDU), Chancellor Angela Merkel’s party. The move seeks to ban the political arm of Hezbollah from Germany and to add the group to the European Union’s terrorist list.

“It is unacceptable that Hezbollah is waging a terrorist fight against Israel in the Middle East, which is being financed through worldwide criminal activities, among other things,” CDU spokesperson Mathias Middelberg said in a statement, according to AP. “In view of Germany's special responsibility toward Israel, we call on the government to ban all activities for Hezbollah in Germany.”

“The separation between a political and a military arm should be abandoned, and Hezbollah as a whole should be placed on the EU terrorist list,” Middelberg said. “This could freeze Hezbollah's funds and assets in Europe more extensively than before.”

Germany last weighed the question of banning the political wing of Hezbollah, which has just over 1,000 members, in June. That bill, sponsored by the far-right Alternative for Germany (AfD), which has repeatedly sponsored bills seeking to ban burqas and minarets, claiming “Islam is not a part of Germany,” according to Middle East Monitor, failed amid joint opposition by the same parties that sponsored the resolution passed Thursday.

Israeli Foreign Minister Israel Katz praised the move, calling it “an important step in the international struggle against terrorism, particularly against terrorist organization Hezbollah and its patron Iran,” AP noted. US Ambassador to Germany Richard Grenell also voiced his support.

Hezbollah is a Lebanese political party and militant group whose primary basis of support is the country’s Shiite Muslim community, although it also enjoys the support of many Christians, Druze and even Sunni Muslims. It gained notoriety for fighting the Israel Defense Forces to a standstill in Lebanon’s south when Israel invaded in 2006. The group was formed as a self-defense force in the early 1980s, during a previous occupation by Israeli forces, against whom it waged a guerrilla campaign. It has also joined the fight in Syria against Daesh and other jihadist rebel groups.

Hezbollah has been accused of multiple acts of terrorism, such as a bus bombing in the Bulgarian city of Burgas in 2012 that killed seven people and injured 32, although no conclusive evidence tying Hezbollah to the attack has been found. It’s also been accused of being behind a slew of terrorist attacks in the early 1980s, including several deadly bombings in Beirut, but again with limited evidence behind the claims. However, 14 nations and several international organizations have declared Hezbollah to be a terrorist organization, while eight nations have declared it not to be one. Hezbollah is also accused of being a proxy of Iran.

Mustafa Ammar, a CDU candidate for the 2021 elections, told Asharq Al-Awsat late last month that secret talks had taken place during a congress held by the CDU in Leipzig about how best to limit anti-Semitism in Germany, especially in schools.

“One of the measures included the total banning of Hezbollah and its activities,” Ammar told the London-based outlet. A Hamburg intelligence agency reported in July that Hezbollah had ties to about 30 mosques across Germany, where it raises funds and spreads its ideology, according to Fox News.

Hezbollah has long maintained it distinguishes between Judaism as a religion and Zionism as a political ideology, with leader Hassan Nasrallah saying in 2009: "Our problem with [the Israelis] is not that they are Jews, but that they are occupiers who are raping our land and holy places." However, Nassrallah and other Hezbollah leaders have also been accused of anti-Semitic statements.

Last week, US President Donald Trump signed an executive order that categorized anti-Israeli speech as anti-Semitism and hate speech under Article VII of the 1964 Civil Rights Act. The move is widely interpreted as aimed at punishing anti-Israel initiatives like Boycott, Divestment and Sanctions (BDS) by declaring them to be anti-Semitic, tying the nation of Israel to the worldwide Jewish community.