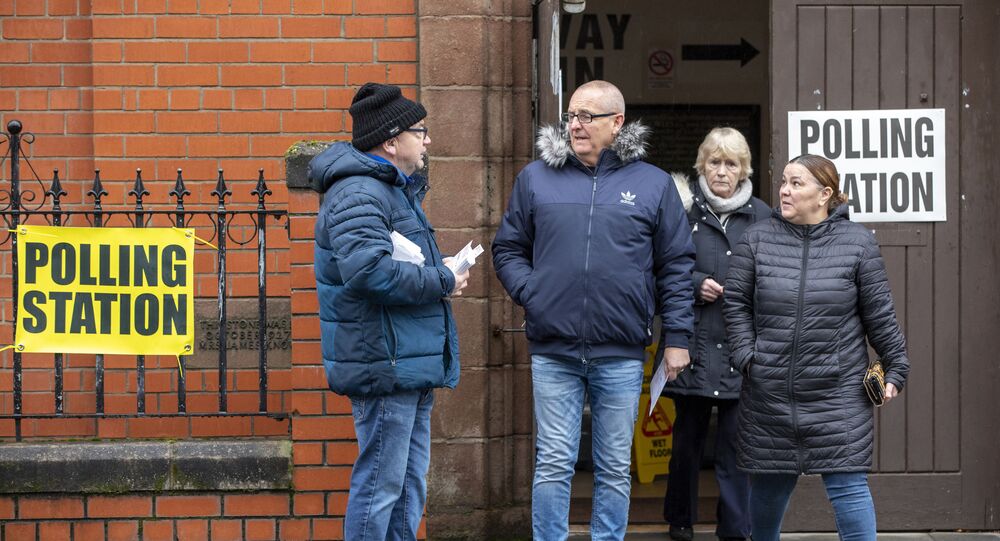 LONDON (Sputnik) - As the United Kingdom heads to the polls for what many consider to be the most important general election in a generation, UK voters are tired from the seemingly endless Brexit saga and expect the new prime minister — whoever it be — to finally resolve the issue.

Polling stations in the United Kingdom are open from 07:00 GMT until 22:00 GMT, as citizens cast their vote in the first December general election in the country since 1923. After polls close, votes will be tallied throughout the night until a result is reached in the early hours of Friday morning.

"We have been promised a lot of things by politicians. I believe that the whole reasoning behind these elections is all very much linked to Brexit," Ben Wells, a solicitor who preferred to vote via mail due to being busy with his job, said.

The original Brexit narrative that big money would be redirected to the National Health Service (NHS) instead of being paid to the European Union turned out to be a complete lie, he noted, adding that a narrow vote margin that has decided the country's fate also raises some questions.

"Basically, half of the whole population of the country is unhappy with the results. Is that democracy? Yes. Is it good? I don’t know, possibly not. It is quite upsetting," Wells said.

Prime Minister Boris Johnson was the most vocal supporter of the Brexit campaign but had no exact plan, and now he is back again with his promises after his predecessor Theresa May took the blow and was exposed to negative publicity amid her repeated failures to get things done, he added.

"It’s disconcerting, upsetting and makes me lose confidence in the political system," Wells replied when asked if he finds it surreal that Boris Johnson offers a solution to the Brexit crisis while he was the one who launched the whole divorce process in the first place.

A nurse, who works for the NHS, said that she and her colleagues were very tired of politics and Brexit news pushed by the media.

"They blame a lot of people, but they do not see the real problem. The real problem is that we have a lot of demand and have very limited supply and we cannot support NHS with this amount of money unless they increase the tax, which I do not really want. But at the same time, having tax cuts can also affect us, so they are making it really hard to decide," she said when asked whether media was exaggerating problems experienced by the NHS.

Amid Brexit hysteria, a lot of nurses from the EU are going home because they feel unwelcome, so there are a lot of vacancies in the NHS, she noted.

A young female lawyer, who cast her ballot in the Waterloo district of London, said that she had voted for the Liberal Democrats, but does not expect them to gain a majority in the government in the near future.

Echoing the remarks of Wells, she also pointed out that the UK government did not sketch out a plan for what would happen after the country had to voted to leave the European Union.